By Ezra Klein
Opinion Columnist
Sign up for the Opinion Today newsletter Get expert analysis of the news and a guide to the big ideas shaping the world every weekday morning. Get it sent to your inbox.
What Republicans are offering, if they win the 2022 elections, is not conservatism. It is crisis. More accurately, it is crises. A debt-ceiling crisis. An election crisis. And a body blow to the government’s efforts to prepare for a slew of other crises we know are coming.
That is not to say there aren’t bills House Republicans would like to pass. There are. The closest thing to an agenda that congressional Republicans have released is the House Republican Study Committee’s 122-page budget. The committee is meant to be something akin to an internal think tank for House Republicans. It counts well over half of House Republicans as members and includes Representatives Steve Scalise, Elise Stefanik and Gary Palmer — all the leaders save for Kevin McCarthy.
After spending some time with the document, I would say it lacks even the pretense of prioritization, preferring instead the comforts of quantity. It lists bill after bill that House Republicans would like to pass. Legislation that would upend the structure and powers of the government — like the bill sponsored by Representative Byron Donalds that seeks to abolish the Consumer Financial Protection Bureau — gets exactly the same treatment as Representative Bob Good’s bill to force schools to release their correspondence with teachers’ unions about when to reopen or Representative Michael Cloud’s resolution disapproving of vaccinating 11-year-olds in Washington, D.C. There are plans to privatize much of Medicare, repeal much of Obamacare and raise the Social Security age and no fewer than eight bills attacking critical race theory.
But even if Republicans win the House and Senate, they cannot enact this agenda. It would fall to President Biden’s veto. What Republicans could do is trigger crises they hope would give them leverage to force Biden to accept this agenda or perhaps force him out of office. And even where Republican leaders do not actually believe that crisis would win them the day, they may have to trigger it anyway to prove their commitment to the cause or to avoid the wrath of Donald Trump.
Advertisement
Continue reading the main story


Start with the debt ceiling. U.S. Treasuries are the bedrock asset of the global financial system. They are the safest of safe investments, the security that countries and funds buy when they must be absolutely sure that their money is safe. Much else in the financial system is priced on this assumption of American reliability: Lenders begin with the riskless rate of return — that is, the interest rate on U.S. Treasuries — and then add their premiums atop that. If the U.S. government defaults on its debt, it would trigger financial chaos. (I guess that’s one way to deal with inflation: Crash the global economy!)

Republicans have been perfectly clear, though: They see the debt limit as leverage in negotiations with Biden. “We’ll provide you more money, but you got to change your current behavior,” Kevin McCarthy, the Republican minority leader and possible speaker of the House, told Punchbowl News. “We’re not just going to keep lifting your credit card limit, right?”
McCarthy may sound measured, but that he would open the door to this tactic at all shows either his weakness or his recklessness. A hostage is leverage only if you’re willing to shoot. And there will be plenty of voices demanding that Republicans pull the trigger or at least prove their willingness to do so.
One of those voices will be Trump’s. “It’s crazy what’s happening with this debt ceiling,” the former president recently told a conservative radio host. “Mitch McConnell keeps allowing it to happen. I mean, they ought to impeach Mitch McConnell if he allows that.”
To put it gently, the record of Republican Party leaders on resisting the demands of their party’s hard-liners, even when they think those demands are mad, is not inspiring. McConnell and the Republican former House speaker John Boehner didn’t have enough command of their members to reject Ted Cruz’s doomed 2013 shutdown over the Affordable Care Act, which both of them thought to be lunacy. And Cruz’s influence with the Republican base and the G.O.P.’s congressional caucus in 2013 was nothing compared with the power Trump now wields. 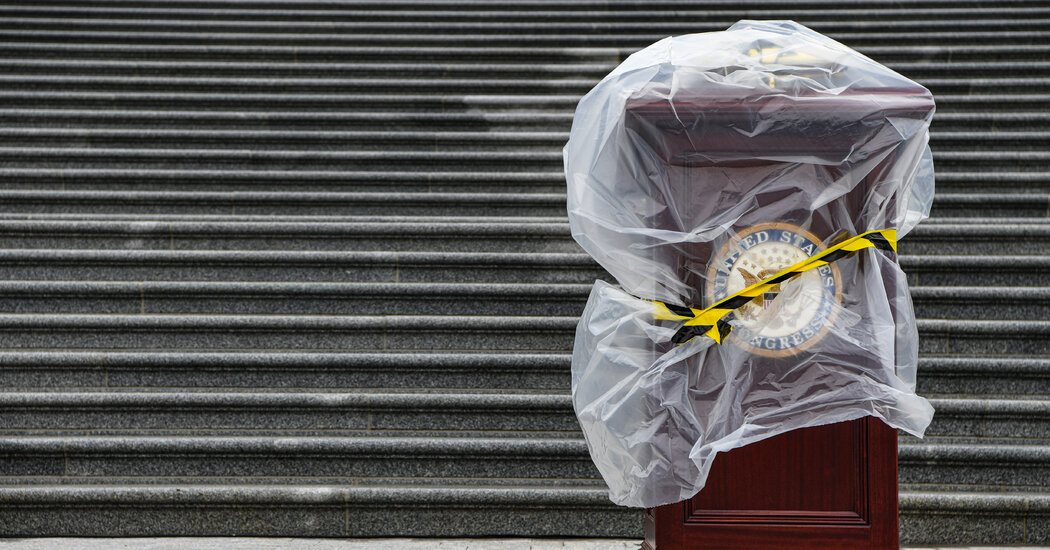 That’s not the only looming crisis. At this point, much is known about the myriad attempts Trump and his backers made to subvert the result of the 2020 presidential election. The country’s saving grace was that there was little preparation behind that effort and Republicans in key positions — to say nothing of Democrats — proved hostile to the project. But as The Times reported in October, more than 370 Republicans running for office in 2022 have said they doubt the results of that election, and “hundreds of these candidates are favored to win their races.”
The 2022 elections are very likely to sweep into power hundreds of Republicans committed to making sure that the 2024 presidential election goes their way, no matter how the vote tally turns out. Hardly anything has been done to fortify the system against chicanery since Jan. 6. What if congressional Republicans refuse to certify the results in key states, as a majority of House Republicans did in 2020? What if — when Trump calls Republican secretaries of state or governors or board of elections supervisors in 2024, demanding they find the votes he wishes he had or disqualify the votes his opponent does have — they try harder to comply? The possibilities for crisis abound.
Here, too, Republican officeholders who don’t fully buy into Trumpist conspiracy theories may find themselves rationalizing compliance. This is a movie we have already watched. Most of the House Republicans who voted against certification of the 2020 election knew Trump’s claims were absurd. But they chose to hide behind Representative Mike Johnson’s bizarre, evasive rationale for voting as Trump demanded they vote without needing to embrace the things he said. Johnson’s solution was to suggest that pandemic-era changes to voting procedures were unconstitutional, thus rendering the results uncertifiable. It was nonsense, and worse than that, it was cowardice. But it’s a reminder that the problem is not merely the Republican officeholders who would force an electoral crisis. The enabling threat is the much larger mass of their colleagues who have already proved they will do nothing to object.
Not all crises begin with a political showdown. Some could come from a virus mutating toward greater lethality. Some could come from a planet warming outside the narrow band that has fostered human civilization. Some could come from the expansionary ambitions of dictators and autocrats. The past few years have brought vivid examples of all three. But particularly over the past year, the Republican Party has shown itself to be somewhere between dismissive of and hostile toward the preparations and responses these possible crises demand.
Last week I criticized the Biden administration for failing to find a party-line path to financing pandemic preparedness. But such a path was necessary only because the Republican Party has swung so hard against efforts to prepare for the next pandemic. The Republican Study Committee’s budget is a vivid example of where the party has gone on Covid. It is not that Republicans are pro-Covid. But the party’s energy is very much anti-anti-Covid. It includes policy after policy attacking vaccine mandates, emergency powers and vaccinations for children. But in its 100-plus pages, I could find nothing proposing ways to make sure we are better prepared for the next viral threat.
It is easy to imagine what such policies might be: The government was slow to authorize certain new treatments and tests, cumbersome in its efforts to dole out money for research and not nearly as innovative as it could have been in deploying technology to monitor new and emerging diseases. This is a libertarian, not a liberal, critique of government. But the study committee’s budget offers no discussion of how deregulation might foster a better response next time.
And it’s not just Covid. Republicans have long been skeptical of efforts to prepare for climate change. The study committee’s budget is thick with plans to goose fossil fuel extraction and bar federal dollars from supporting the Paris climate agreement. Republicans have been, shall we say, divided in their affections for Vladimir Putin, but at least in the early days of Russia’s invasion of Ukraine, many backed efforts to support Ukraine. But McCarthy has suggested that Republicans will cut aid to Ukraine if they win in November, and he’s far from alone in wanting to see the United States back off from the conflict.
Advertisement
Continue reading the main story

Opinion What could still be done if Republicans win back Congress