Ron DeSantis’s Speech Policing Could Hurt the Right Too 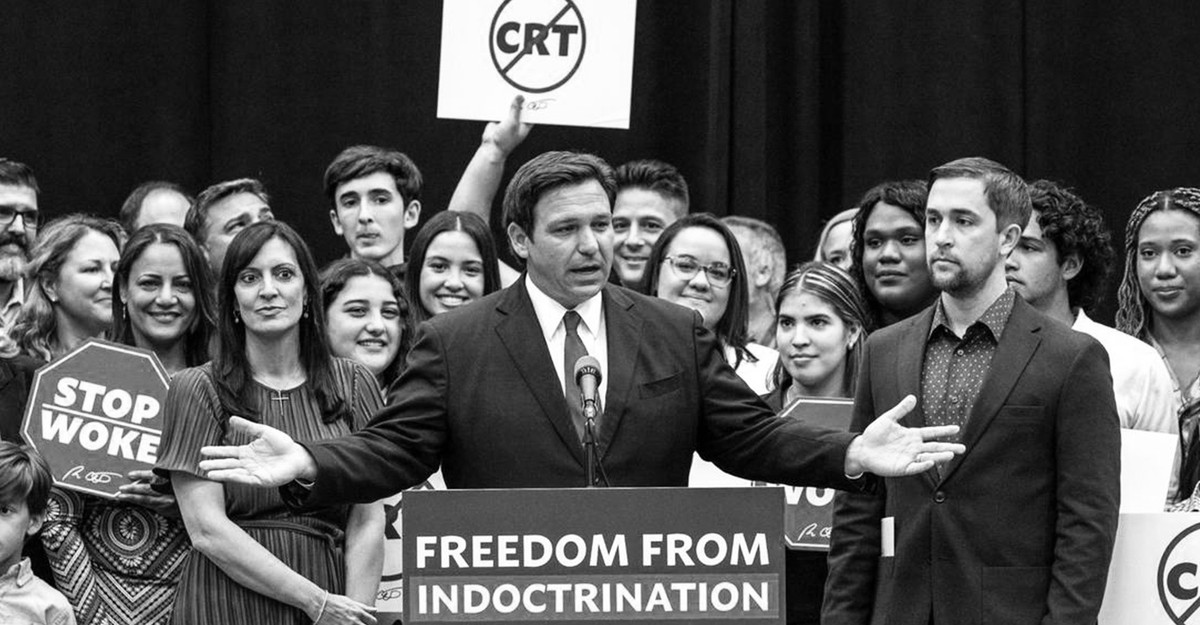 Ron DeSantis’s Speech Policing Could Hurt the Right Too

Someday, progressives may be in a position to abuse a new Florida law.

If free speech and fighting racism come into conflict, which is more important? If you think you know how American conservatives and progressives would answer that question, I’ve got a story to confound you.

It starts with a win for the free-speech rights of professors at public universities. On Thursday, a federal district-court judge in Tallahassee temporarily halted enforcement of a Florida law––popularly known as the “Stop WOKE Act”––that prohibits certain viewpoints in classroom instruction. Signed into law earlier this year by Governor Ron DeSantis, the law (whose nickname is short for “Stop the Wrongs to Our Kids and Employees”) prohibits public schools and universities from promoting eight specific concepts. One of them is that “members of one race, color, sex, or national origin are morally superior to members of another race, color, sex, or national origin.” Another is that “a person, by virtue of his or her race, color, national origin, or sex should be discriminated against or receive adverse treatment to achieve diversity, equity, or inclusion.”

In a press release announcing the legislation, DeSantis said he was taking “a stand against the state-sanctioned racism that is critical race theory”—a reference to instruction and course materials that, for instance, describe racial prejudice as a structural feature of American law and, in many cases, seek race-conscious remedies for it. “We won’t allow Florida tax dollars to be spent teaching kids to hate our country or to hate each other,” DeSantis continued. Supporters cast the law, introduced by conservative Florida legislators, as a civil-rights measure. In court papers, Florida’s lawyers argue that the state passed it to uphold the moral principle behind the Constitution’s equal-protection clause: that “discriminating against people solely because of their race, sex, or other immutable characteristics” is “odious to a free people whose institutions are founded upon the doctrine of equality.”

This fall, the ACLU, the Legal Defense Fund, and the Foundation for Individual Rights and Expression (FIRE) all sought a preliminary injunction against enforcing the law. The groups argued (among other things) that it violates the First Amendment rights of college professors by imposing restrictions on disfavored viewpoints. As FIRE put it in a legal brief in support of a preliminary injunction, “Laws that suppress the expression of ideas violate the First Amendment, no matter how ‘controversial’ or ‘offensive’ lawmakers might find those ideas. Government officials ‘cannot make principled distinctions’ between what is or is not too ‘offensive’ to hear—especially when it comes to the ‘dissemination of ideas’ at state universities.”

Florida insists that the First Amendment is beside the point. The state, its lawyers say, “has simply chosen to regulate its own speech—the curriculum used in state universities and the in-class instruction offered by state employees.” The law does not prevent professors from expressing their own views on their own time, the state argues, but the “First Amendment does not compel Florida to pay educators to advocate ideas, in its name, that it finds repugnant.”


Two moments associated with the case clarify the stakes. In granting a preliminary injunction Thursday, U.S. District Judge Mark Walker noted that the law could be construed as forbidding one of the nation’s most powerful jurists to speak to law students in Florida. He noted that Supreme Court Justice Sonia Sotomayor previously endorsed affirmative action when she wrote in her memoir that she “had been admitted to the Ivy League through a special door” and “had more ground than most to make up before I was competing with my classmates on an equal footing.” But she worked relentlessly. “Distinctions such as the Pyne Prize, Phi Beta Kappa, summa cum laude, and a spot on The Yale Law Journal were not given out like so many pats on the back to encourage mediocre students,” Sotomayor wrote. “These were achievements as real as those of anyone around me.”

In blocking enforcement of the Florida law, Walker wrote:

Defendants further assert that this prohibition extends to guest speakers if they are invited to participate within a course … Assuming the University of Florida Levin College of Law decided to invite Supreme Court Justice Sonia Sotomayor to speak to a class of law students, she would be unable to offer this poignant reflection about her own lived experience.

I would hope that Florida law-school students would be exposed to prominent advocates of all positions in the affirmative-action debate, not shielded from any views—whether Sotomayor’s or those of affirmative-action opponents—that a majority in a given legislative session construed as racist.
Recommended Reading

In October, an exchange between Walker and Charles J. Cooper, one of Florida’s lawyers, showed how severe and lasting a blow the law would strike against free speech if it were upheld. Walker asked whether the state wanted all professors at public institutions “to read from the same page of music.” Cooper maintained that it didn’t—with one “narrow, narrow exception”: Referring to the eight forbidden concepts listed in the law, he said, “These particular eight concepts, which we believe are racially discriminatory and repugnant, we are not going to permit professors speaking in our State-prescribed curriculum, in our classrooms, on our time, accepting our paychecks to express these particular viewpoints.”

According to the transcript, the judge then asked Cooper whether, 15 years from now, after a change of government, “the State of Florida could prohibit the instruction on American exceptionalism because it alienates people of color … and other disadvantaged groups because it suggests that America doesn’t have a darker side that needs to be qualified.”

“Yes,” Cooper said. He added that the state can dictate what will and won’t be taught in college classrooms 15 years from today as surely as today, even if its political profile changes completely. In the future, the Florida legislature could, by the logic of the state’s legal reasoning, prohibit professors from promoting color-blind admissions, meritocracy, individualism, and capitalism if a majority of legislators deemed them racially discriminatory and repugnant.


In fact, a striking passage in Florida’s legal brief opposing the preliminary injunction states, “Even if the First Amendment did apply here, Florida’s compelling interest in stamping out discrimination based on race and other immutable characteristics amply justifies any burden on speech the Act may impose.” The explicit defense of the bill is that fighting whatever politicians dub racism on campus is more important than the First Amendment.

If the DeSantis administration manages to set that precedent, we should rename the law the Enabling Wokeness Act. When David Bernstein lamented in his 2003 book, You Can’t Say That! The Growing Threat to Civil Liberties From Antidiscrimination Laws, that some professors would use the Fourteenth Amendment’s guarantee of equality under the law as a pretext to supersede the First Amendment, he was objecting to a prominent strand of critical race theory. How striking that people who claim to revile CRT are advancing the same logic. The precedent that Florida’s lawyers are pushing on their behalf could limit speech as radically as would any restriction proposed by a group of early critical race theorists in the seminal 1993 book, Words That Wound: Critical Race Theory, Assaultive Speech, and the First Amendment. Reviewing that book in The New Republic, Professor Henry Louis Gates Jr. issued an incisive warning to the critical race theorists:

The advocates of speech restrictions will grow disenchanted not with their failures, but with their victories, and the movement will come to seem yet another curious byway in the long history of our racial desperation.

And yet the movement will not have been without its political costs. I cannot put it better than [Words That Wound co-author] Charles Lawrence himself, who writes: “I fear that by framing the debate as we have—as one in which the liberty of free speech is in conflict with the elimination of racism—we have advanced the cause of racial oppression and placed the bigot on the moral high ground, fanning the rising flames of racism.” He does not intend it as such, but I read this passage as a harsh rebuke to the movement itself. As the critical race theory manifesto acknowledges, “This debate has deeply divided the liberal civil rights/civil liberties community.” And so it has. It has created hostility between old allies and fractured longtime coalitions. Was it worth it?

Proponents of the Stop WOKE Act should ask themselves the same question. Because the original critical race theorists failed to narrow the First Amendment in the name of anti-racism, their successors today––including some professors whom the ACLU is representing in the Florida proceedings––are able to invoke its protections. If the populist right succeeds in stripping faculty of most First Amendment protections in the classroom, where will it turn when progressive legislatures ban its ideas on campus? Meanwhile, DeSantis and his allies are now the ones who have ceded the moral high ground to their culture-war foes by framing a debate as if free speech were in conflict with the elimination of “woke” racism. Was it worth it? As a court dubs this law unconstitutional, I feel vindicated in saying that the answer is no.
You must log in or register to reply here.

Opinion Beware, DeSantis is as much a threat to America as Trump

Ron DeSantis Is an Optical Illusion