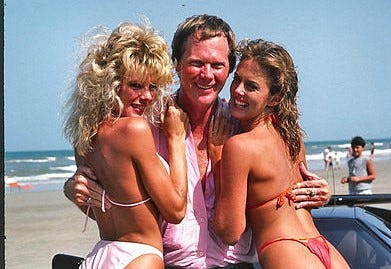 Ron Rice’s recipe for global notoriety and untold riches began with a $4 garbage can and broken broom handle for stirring.

The concoction he settled on, over 50 years ago, would become Hawaiian Tropic suntan lotion and, through Rice’s tireless promotional efforts, eventually made Rice’s Ormond Beach home a party destination for a worldwide Who’s Who of the rich and famous.

Rice, struggling with declining health in recent months, died Thursday in that 12,000-square-foot beachfront home. He was 81.

From a Thursday morning Facebook post: "It is with much sorrow that Ron's family would like everyone to know of his passing this morning. Please allow us privacy in this time of grieving. Ron was loved and admired by many."

"Loved and admired" for a truly American style of mixing work with pleasure.

"He showed us how to promote your product, but also have a great time while doing it," said Linda Kramer, a longtime Hawaiian Tropic associate who remained as one of two on the Rice payroll until the end.

You could tell a rags-to-riches tale of a poor boy, from a dirt-poor family in the mountains of Asheville, N.C., who’d grow up to become rich and famous.

Or a kid who first saw the Atlantic Ocean on a family vacation, immediately grew wide-eyed and vowed to someday return and never leave.

Or a summertime lifeguard in his adopted Daytona Beach, fresh out of the University of Tennessee, who saw countless bottles of Coppertone suntan lotion and thought, “I can do that!”

Ron Rice was all of them.

“It’s almost right out of the Mark Twain stories,” said long-ago marketing partner Allan Cohen. “Here’s this kid in the Carolina mountains, running around barefoot, selling Christmas wreaths, working hard like his father taught him. In many ways, I think he was the original Jed Clampett.”

Instead of bubbling crude — “Texas tea” — for Ron Rice it all started with some mineral oil, coconut oil, some extracts, some this, some that — “a little ABC with XYZ,” he once explained. He hired a pair of 11-year-old kids to fill the first bottles of his lotion, one bottle at a time, from that garbage can.

Before long, his eight-year career as a local school teacher and assistant football coach was over.

“I didn’t think it’d go anywhere at first,” he once said. “I just thought it’d be something fun to do in the summertime.”

Rice originally called it Tropic Tan, but soon learned that name already belonged to someone else, so he went with Hawaiian Tropic, bottled and sold it himself, then sold some more, and some more, eventually landed a distributor, and within a decade was well on his way to building a worldwide brand.

“We were making money hand over fist,” Rice said a few years ago. “We didn’t know what to do with it.”

Rice was an early participant in what would become known as guerilla marketing — getting a product’s name in the mainstream through a variety of promotional methods, some of them unconventional.

It worked, as Hawaiian Tropic became a mainstay on the shelves in drug stores, grocery stores and T-shirt shops the world over — a far cry from the surfside vendors who first agreed to sell his wares on the World’s Most Famous Beach.

Eventually, he fully cashed in.

In 2007, roughly four decades after filling his first garbage can with tanning oil, Rice sold the Ormond Beach-based company for $83 million. But not before putting together several lifetimes-worth of jet-setting fun and games, including his annual Miss Hawaiian Tropic contests (from 1983-2010), which began in Daytona Beach before going nationwide and around the globe.

“I came into the company when it was already well established,” said Kramer, who was Rice’s promotions director from 1985 through the 2007 sale. “That was when Ron could move away from the hustling — getting the product into stores — to start concentrating on promoting it, finding new things. He really embraced the promoting. The pageants were his big thing.”

Rice and Hawaiian Tropic became synonymous with his big roster of young women who traveled to major international events and promoted the product. Kramer choreographed those outings and remembers it as a mix of much work but much fun.

“I think Ron found the things he enjoyed and found a way to put himself in that sphere,” she said. "Somehow he always managed to find himself there.

“We would have a great time. The girls, they’d just walk into an event and everybody was like, ‘Oh, my, it’s the Hawaiian Tropic girls!’"

A few years ago, Rice stated the obvious: “The perks that came along with it all were amazing.” 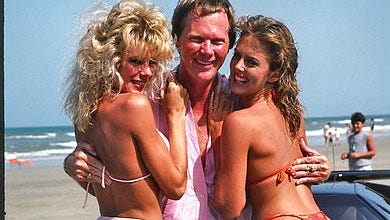 It all started with a garbage can and broomstick, some coconut oil and other ingredients. Along the way, it forged a worldwide promotional tour.
www.news-journalonline.com

R.I.P. Ron, and congratulations on a life well lived.
Reactions: Phenomenally Frantastic
You must log in or register to reply here.

Can Ron DeSantis Displace Donald Trump as the G.O.P.’s Combatant-in-Chief? (The New Yorker)

David McCullough, Best-Selling Explorer of America’s Past, Dies at 89

Off Topic Monday at 7:39 AM
BioHawk