Ron Stander, known as the Bluffs Butcher, brought a heavyweight title fight to Omaha, and now has died

The “Council Bluffs Butcher” has died.
Boxer Ron Stander, who helped put Council Bluffs on the sporting map in the 1970s, died Tuesday at the age of 77. He had been in hospice care, according to his family.
Toddy Stander said her husband died Tuesday from complications of diabetes at their home in the Omaha, Nebraska, suburb of Ralston.

Stander was in the national spotlight on May 25, 1972 when he fought the WBC and WBA boxing heavyweight champion Joe Frazier at the Omaha Civic Auditorium.
Nearly 10,000 people filled the Civic on May 25, 1972. Electricity was in the air as the majority of the capacity crowd backed the local challenger. Chants of “Go Big Ron” echoed through the arena.


Early on, Stander gave as good as he got. At one point in the first round, he landed a right to the chest that put Frazier on his heels. A follow-up left sent the champ staggering backward.
In the next round, Stander unleashed an enormous right uppercut as Frazier ducked his head while coming out of a corner. The punch — the one the Butcher’s trainer, Johnny Dunn, thought could bring the world title to Council Bluffs — whizzed past the champ’s left ear.

Stander’s chances for victory went with it.

From that point on, Frazier carved up the Butcher. After the fourth round, ringside doctor Jack Lewis stopped the fight due to lacerations on Stander’s face that took 17 stitches to close.

Frazier retained the title by technical knockout, although that was the last time he’d leave a boxing ring as a world champion. George Foreman TKO’d Frazier in two one-sided rounds in his next bout.
Stander also fought, and lost to, heavyweights Scott LeDoux, Ken Norton and Gerrie Coetzee in the 1970s, and remained a popular figure in boxing circles the rest of his life. 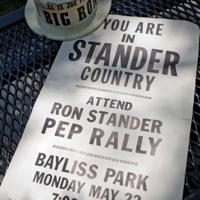 The “Council Bluffs Butcher” has died.

Ron Stander, the boxer from Council Bluffs best known for his 1972 world title bout against Joe Frazier in Omaha, died Tuesday at his home in Ralston.


Poster from Joe Frazier vs. Ron Stander fight in Omaha in 1972.

Stander, known as the Bluffs Butcher for his hometown and fearsome punching power, was 77. He died of complications from diabetes, said his wife, Toddy.
Retired from boxing in 1982, Stander's fame had peaked when he fought Frazier after knocking out another legendary boxer, Earnie Shavers. But Stander was never forgotten by his friends in the boxing world and the friends he made in all walks of life. Many came to see him while he was in hospice.
"I can't begin to tell you how many boxers came to the house," Toddy Stander said. "They'd hold his hand and kiss him on the forehead and tell him they loved him: I love you, champ. You're my hero."


Born in Columbia, South Carolina, Stander grew up in Council Bluffs, graduating from Abraham Lincoln High School in 1962. He changed sports from football to boxing, leading to a notable career that started in the late 1960s. He had hair like Elvis, he was famously fond of beer, and he never boxed backward, always taking the fight to his opponents no matter how heavily favored they were.

He delivered catchy quotes as well as jaw-rattling uppercuts. "I'll fight any living human, and most animals," Stander used to say.

Stander would later say that his defeat of Shavers, considered one of the hardest punchers ever, was the high point of his career. The Bluffs Butcher was ranked as high as No. 8 in the world at one point. He would wade in and wear down opponents by taking their punches and pounding them with his own, but he was prone to cuts on his face.


Then-heavyweight champion Smokin' Joe Frazier came to Omaha to fight Stander on May 25, 1972, before nearly 10,000 people in the Civic Auditorium and a national television audience. For Frazier, it was seen as a tune-up before a bout against George Foreman. But Stander came to contend. He went toe-to-toe with the champion for four rounds before losing by technical knock-out when a doctor called the fight because of multiple cuts to Stander's face. The fight is still considered one of the greatest sporting events in Omaha history.

Stander fought for another 10 years. After retiring with a record of 38-21-3, including defeats at the hands of such renowned fighters as Ken Norton and Gerrie Coetzee, he returned to Omaha and worked at Vickers Hydraulics.

Toddy Stander said the boxing hangers-on faded away when the fame subsided, but Stander had good friendships from boxing and elsewhere that he maintained through his life.

"We all have imperfections," Toddy Stander said. "But Ronnie's good things about him, his kind-heartedness, his compassion for people, his compassion for the underdog, his willingness to volunteer, and all his goodness in him, and he loved his family. His family was so important."
He loved his children and grandchildren, she said.
"His favorite saying to them was 'Love you more,' " she said. "Love you more. Always was that."
Visitation is set for 2 to 6 p.m. Sunday at Hoy-Kilnoski Funeral Home, 1221 N. 16th St. in Council Bluffs. The funeral is scheduled for 11 a.m. on Monday at Holy Name Catholic Church in Omaha. 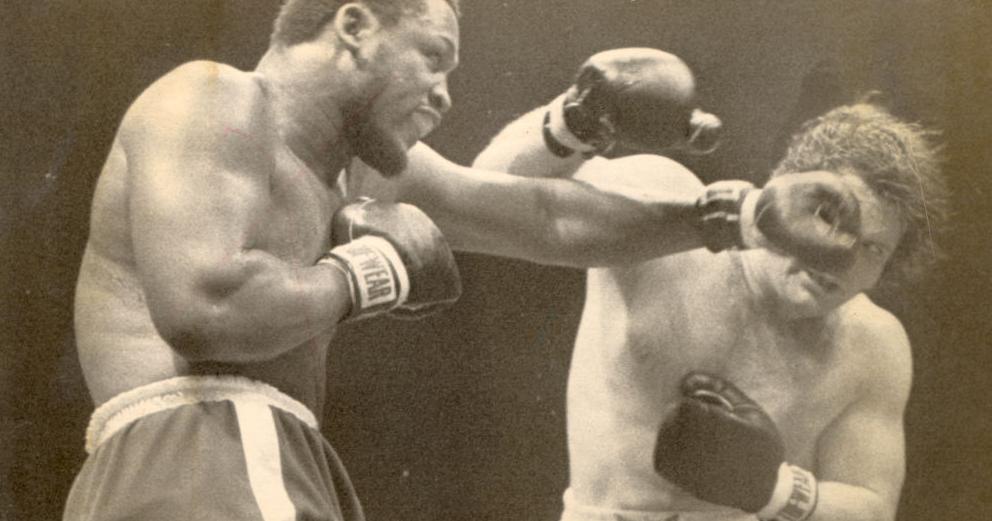 Ron Stander's fame peaked when the Council Bluffs boxer fought Joe Frazier in a 1972 world title bout in Omaha. Retired from boxing in 1982, he died Tuesday at 77.

omaha.com
Reactions: An Iowa fan
A

Thanks for posting this. I remember him.
Reactions: cigaretteman
You must log in or register to reply here.

Plans call for another bridge to Council Bluffs