A suburban father facing murder charges in the deaths of his three children left a note for his estranged wife that said if he couldn't have the children, then she couldn't either, prosecutors said in court Wednesday.

Jason Karels, 35, had his bond set at $10 million by a Lake County judge, but prosecutors plan to petition for no bond at a hearing that could happen later this week.
Recent Stories from ABC 7 Chicago


It appears Karels and his wife had an ongoing custody battle. The children had been dropped off with him for the weekend.

"Mr. Karels left a note in the home, which stated, 'if I can't have them, neither can you,'" Lake County State's Attorney Eric Rinehart said.

Police said a mother who was supposed to pick up her three children from her estranged husband contacted them around 1:40 p.m. Monday to perform a well-being check inside a home in the 200-block of East Camden Lane in the Sutton-on-the-Lake subdivision. When police arrived, they found the three children, who were identified as 5-year-old Bryant, 3-year-old Cassidy and 2-year-old Gideon Karels by the Lake County Coroner's Office, dead. The coroner's office said preliminary autopsies indicate they died from drowning.

Authorities said the children were drowned in the bathtub by their father at his home on Camden Lane. Their bodies were found in a bedroom.

Prosecutors said Karels drowned them one by one.

Lake County Board Member Dick Barr set up a GoFundMe for the mother.

Police arrested Karels when he crashed his Nissan off Interstate 80 near Joliet after a high-speed chase with police.

"After the crash, Karels made statements to police officers involved in the chase and wearing body-worn cameras indicating he was responsible for the deaths of the children at the Round Lake Beach home," Round Lake Beach Police Chief Gilbert Rivera said Tuesday. "He also said he attempted to commit suicide several times after the deaths of the children but was unsuccessful during these attempts." 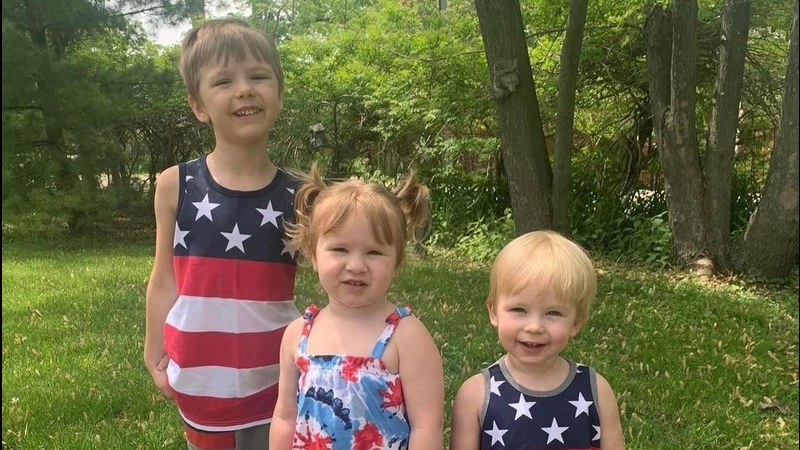 <iframe width="476" height="267" src="https://abc7chicago.com/video/embed/?pid=11959048" frameborder="0" allowfullscreen></iframe>
Round Lake Beach police give an update on murder charges filed against a father in the deaths of his three children.


His blood was allegedly found inside the home.

After being hospitalized, Karels, who has been charged with three counts of murder, was taken to the Lake County Jail.


"I don't know that anything could've stopped this or if there were any early indications of it," Chief Rivera said. "As I mentioned, we were not familiar with this family nor with the house."

The Illinois Department of Children and Family Service had no previous contact with the family, an agency spokesman said Wednesday.

The father has no known criminal history, or history of drug use or mental illness, Rivera said.

The community is struggling to understand this senseless act, but is now rallying around the mother of those children with a growing memorial outside the home.

If Karels posts bond before that next hearing, he's supposed to stay away from the mother of those kids.

The family had moved to the Round Lake Beach home five years ago, Rivera said. Mother of 3 kids killed in Round Lake Beach home speaks out, 'My children were amazing'

"I talked to the kids the night before. I said, 'I love you so much. I can't wait to see you tomorrow.' And the next day they're gone."

This is an easy case for the death penalty. Remove this guy from society completely.
Reactions: seminole97, Tenacious E and Tunadog

Draw and Quarter him.

mnole03 said:
This is an easy case for the death penalty. Remove this guy from society completely.
Click to expand...

Preferably by drowning him in a bathtub while he can look up through the water and see his executioner staring at him.
Reactions: Jimmy McGill and mnole03

Tenacious E said:
Preferably by drowning him in a bathtub while he can look up through the water and see his executioner staring at him.
Click to expand...

I wonder if you could waterboard someone to death?

seminole97 said:
I wonder if you could waterboard someone to death?
Click to expand...

Worth a shot.
You must log in or register to reply here.

Incendiary device planted at University of Iowa. Suspect in custody.