Scientists have discovered a glitch in our DNA that may have helped set the minds of our ancestors apart from those of Neanderthals and other extinct relatives.
The mutation, which arose in the past few hundred thousand years, spurs the development of more neurons in the part of the brain that we use for our most complex forms of thought, according to a new study published in Science on Thursday.
“What we found is one gene that certainly contributes to making us human,” said Wieland Huttner, a neuroscientist at the Max Planck Institute of Molecular Cell Biology and Genetics in Dresden, Germany, and one of the authors of the study.

The human brain allows us to do things that other living species cannot, such as using full-blown language and making complicated plans for the future. For decades, scientists have been comparing the anatomy of our brain to that of other mammals to understand how those sophisticated faculties evolved.
Advertisement
Continue reading the main story


The most obvious feature of the human brain is its size — four times as large as that of chimpanzees, our closest living relatives.
Our brain also has distinctive anatomical features. The region of the cortex just behind our eyes, known as the frontal lobe, is essential for some of our most complex thoughts. According to a study from 2018, the human frontal lobe has far more neurons than the same region in chimpanzees does.
But comparing humans with living apes has a serious shortcoming: Our most recent common ancestor with chimpanzees lived roughly seven million years ago. To fill in what happened since then, scientists have had to resort to fossils of our more recent ancestors, known as hominins.
Inspecting hominin skulls, paleoanthropologists have found that the brains of our ancestors dramatically increased in size starting about two million years ago. They reached the size of living humans by about 600,000 years ago. Neanderthals, among our closest extinct hominin relatives, had brains as big as ours.


But Neanderthal brains were elongated, whereas humans have a more spherical shape. Scientists can’t say what accounts for those differences. One possibility is that various regions of our ancestors’ brains changed size.

In recent years, neuroscientists have begun investigating ancient brains with a new source of information: bits of DNA preserved inside hominin fossils. Geneticists have reconstructed entire genomes of Neanderthals as well as their eastern cousins, the Denisovans.
Scientists have zeroed in on potentially crucial differences between our genome and the genomes of Neanderthals and Denisovans. Human DNA contains about 19,000 genes. The proteins encoded by those genes are mostly identical to those of Neanderthals and Denisovans. But researchers have found 96 human-specific mutations that changed the structure of a protein.
In 2017, Anneline Pinson, a researcher in Dr. Huttner’s lab, was looking over that list of mutations and noticed one that altered a gene called TKTL1. Scientists have known that TKTL1 becomes active in the developing human cortex, especially in the frontal lobe.
“We know that the frontal lobe is important for cognitive functions,” Dr. Pinson said. “So that was a good hint that it could be an interesting candidate.”
Dr. Pinson and her colleagues did initial experiments with TKTL1 in mice and ferrets. After injecting the human version of the gene into the developing brains of the animals, they found that it caused both the mice and ferrets to make more neurons.

Next, the researchers carried out experiments on human cells, using bits of fetal brain tissue obtained through the consent of women who had abortions at a Dresden hospital. Dr. Pinson used molecular scissors to snip out the TKTL1 gene from the cells in the tissue samples. Without it, the human brain tissue produced fewer so-called progenitor cells that give rise to neurons.
Advertisement
Continue reading the main story


For their final experiment, the researchers set out to create a miniature Neanderthal-like brain. They started with a human embryonic stem cell, editing its TKTL1 gene so that it no longer had the human mutation. It instead carried the mutation found in our relatives, including Neanderthals, chimpanzees and other mammals.
They then put the stem cell in a bath of chemicals that coaxed it to turn into a clump of developing brain tissue, called a brain organoid. It generated progenitor brain cells, which then produced a miniature cortex made of layers of neurons.
The Neanderthal-like brain organoid made fewer neurons than did organoids with the human version of TKTL1. That suggests that when the TKTL1 gene mutated, our ancestors could produce extra neurons in the frontal lobe. While this change did not increase the overall size of our brain, it might have reorganized its wiring.
“This is really a tour de force,” said Laurent Nguyen, a neuroscientist at the University of Liège in Belgium who was not involved in the study. “It’s remarkable that such a small change has such a dramatic effect on the production of neurons.”
The new finding does not mean that TKTL1, on its own, offers the secret to what makes us human. Other researchers are also looking at the list of 96 protein-changing mutations and are running organoid experiments of their own.
Other members of Dr. Huttner’s lab reported in July that two other mutations change the pace at which developing brain cells divide. Last year, a team of researchers at the University of California San Diego found that another mutation appears to change the number of connections human neurons make with each other.

Other mutations may also turn out to be important to our brains. For example, as the cortex develops, individual neurons need to migrate in order to find their proper place. Dr. Nguyen observed that some of the 96 mutations unique to humans altered genes that are likely involved in cell migration. He speculates that our mutations may make our neurons move differently than neurons in a Neanderthal’s brain.
“I don’t think it’s the end of the story,” he said. “I think more work is needed to understand what makes us human in terms of brain development.” 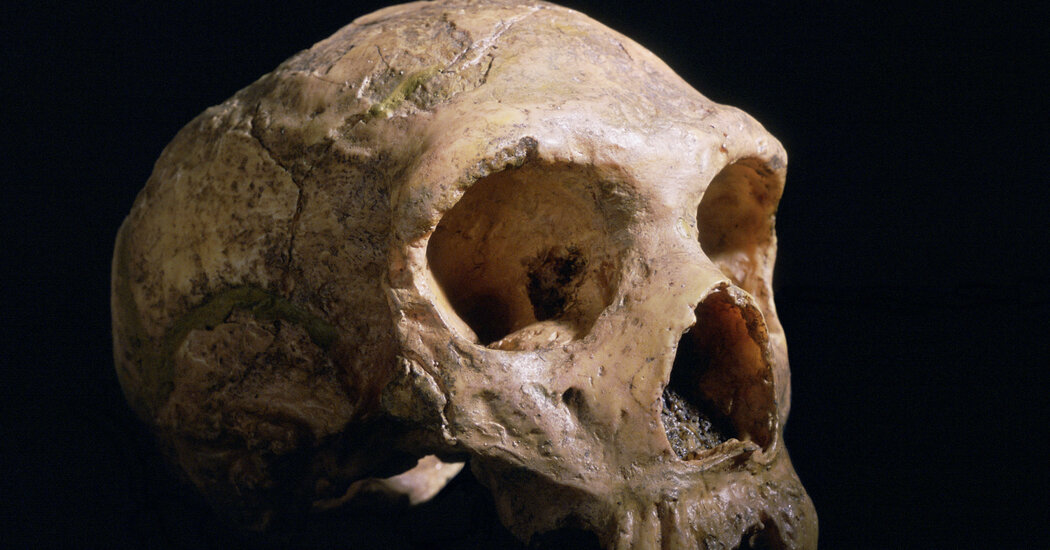 What Makes Your Brain Different From a Neanderthal’s?

Scientists have discovered a mutation that increases the production of brain cells and seems to have set our ancestors apart from other hominins.