Over the last few weeks, the news for Scott Walker's presidential campaign has been getting grimmer and grimmer:

Reports of money problems are very bad for a presidential campaign
The last of those points above is particularly ominous. Word of money problems often serves as the canary in the coal mine — signifying an imminent campaign collapse. And they can start a downward spiral, leading supporters to jump ship and fundraising to dry up because the candidate looks more and more like a loser.

For instance, it got out in early August that Rick Perry's campaign was no longer paying staffers due to poor fundraising. Perry managed to hang in the race for one more month, but everyone could see he was a dead man walking. He finally quit after failing to qualify for this week's debate.

If Walker already isn't paying his consultants, fundraising has likely fallen well short of expectations, and the campaign has committed to much more spending than it can afford (Johnson and Gold report that there are 90 full-time staffers). If so, it would be possible for Walker to radically downsize his operation and stay in the race — John McCain did just that in 2007, and won the nomination.

But it would be a tough road ahead. The next debate is a long way away, and there's no indication that Donald Trump is going to stop monopolizing media attention anytime soon. Meanwhile, the host of that debate, CNBC, hasn't announced how it will determine who qualifies — but if it uses national polls, like Fox News and CNN did, Walker could be in serious danger of failing to make the cut.

Walker's campaign has been lackluster because Scott Walker is lackluster
As far back as 2014, and especially earlier this year, Scott Walker has seemed, on paper, to be a fantastic Republican candidate. He was elected three times in a blue state, and while governor of Wisconsin, he fought hard for conservative priorities in a way that impressed both the GOP's base and its elites.

But presidential campaigns aren't fought on paper, and, in person, Scott Walker simply isn't compelling or attention-grabbing. I argued nearly a year ago that Walker's lack of charisma would be his biggest problem "in a world where primary candidates rise and fall in the polls based partly on their performance in televised debates."

Indeed, Walker led the polls in Iowa up until just before the first presidential debate August 6. Afterward, he plummeted, as you can see in this RealClearPolitics chart:

Walker's lack of charisma isn't his only problem. He's also proven unexpectedly feckless on the issues, changing his position on topics like immigration in various insincere-seeming ways. But it was when Republicans got a look at all the candidates onstage — seeing Walker live, rather than on paper — that his position in Iowa collapsed. He hasn't stopped falling since.

Still, I'd be surprised if Walker dropped out any time soon. He's built his political brand on his willingness to fight and he seems to be a true believer. Indeed, he's now vowing that he'll stay in the race and focus entirely on winning the Iowa caucuses. All the recent caucus winners — Rick Santorum, Mike Huckabee, Barack Obama, and John Kerry — surged in the polls quite late. He's invested so much of his reputation in the race already — so he might as well stick it out a few more months.

It is not in trouble it is done, just waiting for the correct time to get out.

The only thing I think some of these guys are hoping for is to able to pick up support as others drop out.

You went to all that trouble posting something everyone knows and doesn't even care about.
S

strummingram said:
You went to all that trouble posting something everyone knows and doesn't even care about.
Click to expand... 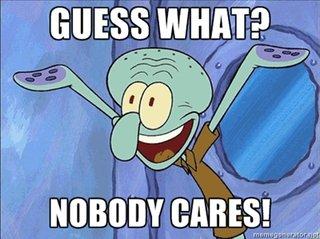 Trump, Carson, and Cruz are leading the Republicans. How low has the GOP sunk?
Reactions: cigaretteman

Huey Grey said:
Trump, Carson, and Cruz are leading the Republicans. How low has the GOP sunk?
Click to expand...

You forgot Fiorina (to hammer home your point)
You must log in or register to reply here.

Herschel Walker another No show at tonight’s debate.

Off Topic Tuesday at 10:39 PM
BioHawk

The latest: Sen. Scott calls for Biden to resign over inflation

Opinion: New revelations about Herschel Walker show how Democrats could hold the Senate