For want of a reliable wide receiver, the Dallas Cowboys’ season was lost.
The team’s quarterback, Dak Prescott, fractured his thumb while trying to lead a hopeless fourth-quarter comeback in a 19-3 loss to the Tampa Bay Buccaneers on Sunday night. Prescott faced a relentless pass rush all evening because the Buccaneers had little to fear from a depleted Cowboys receiving corps consisting of CeeDee Lamb, undrafted rookies and career backups.
Something terrible was bound to happen, and it did.
The Cowboys had been flush with receiver talent in past seasons, but they traded Amari Cooper, Prescott’s top target from 2018 through 2021, to the Cleveland Browns for a fifth-round draft pick in early March. Though Cooper’s $20 million salary was slated to become guaranteed this season, the cost-saving move appeared ill-advised at the time and looks downright cataclysmic now that the Cowboys will be without a functioning offense until Prescott’s return, if not beyond.
Yet the Cowboys were just one of several would-be contenders who traded away top receivers in the off-season and sorely missed them in their season openers.

It all started during the N.F.L. free agency period in March, when the Jacksonville Jaguars signed Christian Kirk, a productive receiver but no superstar, to a four-year, $72 million contract. That unexpectedly generous contract threw a wrench into the negotiations between the extension-seeking All-Pro receivers Davante Adams and Tyreek Hill and their respective teams, which in turn sparked something of a bear market for the position.
Advertisement
Continue reading the main story


Suddenly, perennial playoff contenders were eager to sell off the services of their quarterback’s favorite playmakers to upstarts with available cash and cap space.
The Green Bay Packers traded Adams, a two-time All-Pro who caught 29 touchdown passes from Aaron Rodgers over the 2020 and 2021 seasons, to the Las Vegas Raiders for first- and second-round draft picks. Kansas City traded Hill, Patrick Mahomes’s most prolific highlight-reel collaborator, for a similar haul.
On draft day, the Tennessee Titans traded A.J. Brown, their leader in receptions and yards from 2019 through 2021, to the Philadelphia Eagles, while the Baltimore Ravens traded the top receiver Marquise Brown to the Arizona Cardinals, each for first-round picks.
The Cowboys, always two steps ahead of the competition, had already overpaid Cooper in 2020 and dealt him just before suitors began lining up with first-round compensation. Never take stock market advice from Jerry Jones.

Most of the traded receivers signed $100 million-plus extensions with their new teams, while their former employers drafted rookie consolation prizes, most notably the Titans’ first-round pick, Treylon Burks, and the Packers’ second-round pick, Christian Watson. Unfortunately, asking a rookie to fill in for Adams or A.J. Brown is like replacing the company sales leader with a plucky intern.
Advertisement
Continue reading the main story


Rodgers’s first pass of the 2022 season was a pinpoint 45-yard bomb which plummeted softly into Watson’s hands … and then straight through them to the ground. Rodgers responded to the drop by trying to vaporize the rookie with his optic blasts, but Rodgers hasn’t yet acquired that superpower, and heaven help society if he does.

Sign up for the Sports Newsletter Get our most ambitious projects, stories and analysis delivered to your inbox every week. Get it sent to your inbox.
Instead, Rodgers settled for an afternoon of long scowls at his receivers and short dump-offs to his running backs and tight ends in a 23-7 loss to the Minnesota Vikings.
While Rodgers welcomed his new receivers the way a toddler welcomes a bowl of broccoli, Adams caught 10 passes for 141 yards and one touchdown in a narrow Raiders loss to the Los Angeles Chargers. For comparison’s sake, five Packers wide receivers combined for just 120 yards on Sunday.

The Titans, meanwhile, are trying to solve their wide receiver problem the way the Titans solve all of their problems: by working running back Derrick Henry like a rented stump grinder. In one third-quarter series against the Giants last week, Henry took a first-down handoff, then a second-down handoff, then lined up at quarterback for a direct snap on third down. Henry bobbled the snap, the Titans punted, and the Giants scored the touchdown which jump-started their 21-20 upset victory.
Relocated to Philadelphia, A.J. Brown caught 10 passes for 155 yards in a 38-35 Eagles victory over the Detroit Lions. With Brown upgrading their passing game and a Cowboys tailspin imminent, the Eagles have become heavy favorites to win the N.F.C. East.

The Titans, a 12-win team in 2021, must now try to keep pace in the A.F.C. while executing game plans that would bore your grandfather’s high school coach.
Advertisement
Continue reading the main story


Kansas City did not appear to be affected by Hill’s absence in Week 1. Mahomes, who still has reliable targets in the All-Pro tight end Travis Kelce and the veteran addition JuJu Smith-Schuster, threw five touchdown passes in a 44-21 blowout of the Arizona Cardinals.
As for Hill, he is now the focal point of the Dolphins’ DoorDash offense, collecting Tua Tagovailoa’s hot-potato tosses and delivering them downfield on foot. Hill’s eight catches for 94 yards fueled a 20-7 victory over the New England Patriots, a team that abandoned the use of wide receivers altogether after the 2019 season.
The Ravens also did not miss Marquise Brown, whose four catches and meaningless late-game touchdown allowed him to fit right in with the stylishly underachieving Cardinals. Lamar Jackson did not need much help to trounce the Jets and never will. The Ravens face a tougher test, however, when they host the Dolphins on Sunday while Kansas City will face the up-and-coming Chargers on Thursday night. Hill and Brown’s departures could soon start to sting.
Receiver salaries stabilized by summer, and stars such as Deebo Samuel, Terry McLaurin and DK Metcalf signed hefty-but-affordable extensions. The Cowboys, Packers, Titans, Kansas City or Ravens might have found a way to satisfy their top receivers had they waited out the bear market. Instead, the Cowboys’ 2022 season is essentially over, and the others face a much steeper climb to the Super Bowl.
As for the team that started all of this: They lost to the Washington Commanders on Sunday, despite six catches for 117 yards from Kirk, whose contract butterfly-effected this whole thing. Leave it to the Jaguars to ruin things for everyone else without really helping themselves. 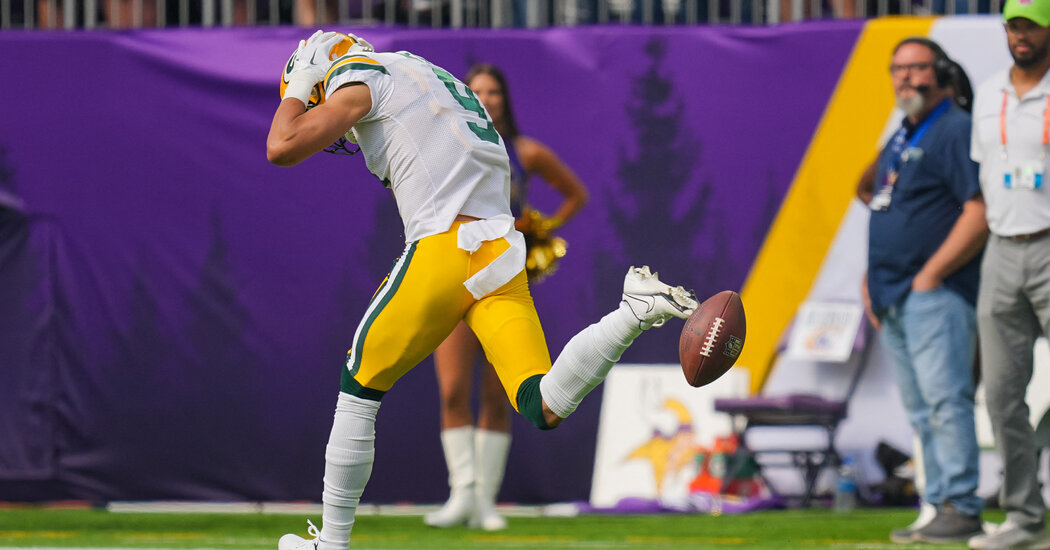 Aaron Rodgers isn’t the only quarterback who is missing his former wideouts. Just the angriest.

Cowboys are fvcked, no doubt. The Pack will be fine.
You must log in or register to reply here.

Bears cut WR Ihmir Smith-Marsette, who fumbled at end of game vs. Vikings