So the Shah was stockpiling thousands of pieces of Western art? Warhal is on display in Tehran and the exhibit is being mobbed!

From what I can tell, there is a huge disconnect between the government in Iran's stance toward the United States and the feelings of the general population toward us. Western culture seems to be somewhat outlawed, and yet the people of Iran appear to take it all in regardless.

This AP story reveals that the the Shah acquired a treasure trove of Western art that has been locked away since the 1979 Revolution. They have recently put some of their Andy Warhol art on display and the show is being mobbed.

It is always refreshing to learn that not all of Islam hates us. In fact, if it were not for the hard line government in Tehran, we could probably be somewhat friendly with the Iranian people. If that government ever implodes, Iran could become a somewhat friendly ally. (or some version of this at least?)

TEHRAN, Iran (AP) — Iranian hard-liners, now back at the helm of the country, may regularly rail against the poisoning of Islamic society by Western culture, but in Tehran, Iranians are flocking to the contemporary art museum to marvel at American pop artist Andy Warhol’s iconic soup cans.

The circular floors of the Iranian capital’s Museum of Contemporary Art display a sprawling line-up of 18 classic Warhol works, recognizable at first glance: silk-screen portraits of Communist China’s founding leader Mao Zedong and Hollywood star Marilyn Monroe, paintings of Campbell Soup cans and a vintage print of former first lady Jacqueline Kennedy. The exhibit, simply named A Review of Andy Warhol’s Works, first opened in June and closes on Sunday. The still-surging coronavirus, which has killed more people in Iran than any other country in the Middle East, forced the museum to close its doors to Warhol fans for a few weeks in August.

“I love this painting,” gushed 46-year-old Fatemeh Rezaee, taking in the colored ink of Marilyn Monroe’s face, which Warhol produced in 1962 soon after the actress killed herself. “By looking at it, I visualized Marilyn Monroe’s life story in my head. It makes the concept of death really tangible for me.”

Rezaee, a retired teacher in a loose silk hijab, was so enthralled by the exhibit that she flew all the way from her home in the southern city of Shiraz to see it — twice.
She went on: “His selection of colors is outstanding and to me conveys a combination of feelings such as melancholy and mortality.”

Warhol’s works are among a permanent art collection worth billions of dollars kept in the Tehran museum vault. As oil boomed during the reign of Shah Mohammad Reza Pahlavi, the country acquired thousands of pieces, including Monets, Picassos and Jackson Pollocks, before the 1979 Islamic Revolution ousted the pro-Western monarchy and vaulted Shiite clerics to power.

Iran’s new theocracy first banned modern art and packed away the famous paintings. But in recent decades as cultural restrictions eased, some 1,500 Western art pieces from the dynastic era have gone back on display — with much fanfare. In 2015, Tehran’s municipal council even plastered the city’s billboards with hundreds of works by great American painters, from Rothko to Hopper, transforming the sprawling city into a giant, open-air exhibit.

Still, a visitor won’t find Warhol’s grittier fare, like his notorious experimental films, on display in Tehran. In 2005, when the museum showcased its entire collection of 20th-century American and European masterworks, choice pieces — including a Renoir nude — were hidden to avoid offending conservative Islamic sensibilities.

The audience in Tehran on Wednesday nonetheless appeared satisfied with Warhol’s silk-screen printings that tested orthodoxies by portraying consumerist themes in the early 1960s.

“People have exceptionally welcomed Andy Warhol paintings’ exhibition,” said museum spokesperson Hasan Noferesti, noting the crowds amid the coronavirus pandemic required the museum cap the number of visitors per hour. One visitor, 21-year-old microbiology student Shahin Gandomi dressed in a black shirt and wearing his hair in a ponytail, praised the Mao Zedong painting series. “When an artist portrays a dictator in an artwork, it appears like that dictator has been taken down from his sacred position,” he said.

The showcase may be coming to an end, but Noferesti said the museum plans to put more Warhols and Western artists on display soon. Although Iran has no diplomatic relations with the United States and hostilities have simmered between the countries since 1979, bootleg copies of Hollywood blockbusters and Western music remain popular in the country, particularly among young urbanites. Tensions with the U.S. have surged in recent months, as the election of President Ebrahim Raisi, the protégé of Iran’s supreme leader, brought hard-liners to power across every branch of government. Iran has accelerated its atomic program and talks to revive Tehran’s now-tattered 2015 nuclear deal with world powers have stalled for months.

But at Tehran’s sleek, white-walled exhibit this week, there was no talk of political tensions or American sanctions. re have been great artists in history, and it is tremendously good that we can get to see their artworks here,” said 20-year-old graphics student Kourosh Aminzadeh, who had come back for a second visit.
Last edited: Oct 22, 2021
Reactions: Torg

This was from a long time ago but I still recall a couple colleagues insist that they were of persian descent not iranian. i did not inquire deeper but wonder if that's their way of expressing disagreement with their government. also another probably related thing that's interesting is that iranian names are very distinct compared to folks from other islamic nations.
Reactions: Titus Andronicus

Worked with a chemist from Iran that said exact same thing.

I just assumed it was because of the stigma of the Iran hostages.
Reactions: desihawk

I concur; There is a huge population of Iranian immigrants in Los Angeles and it is the same thing. They all seem to prefer to be referred to as "Persian."
Reactions: desihawk

Prior to 9/11 I was regularly laughed at for claiming that Iran was the key to resolving things in the ME. The people are well educated, it’s a sophisticated country whose leadership was becoming more and more controlled by moderates and whose people were willing to have positive relationships with The West.

After 9/11 we had a golden opportunity to take advantage of an incredible amount of good will that was coming our way and ill will towards the radicals and fundamentalists. But when we invaded Afghanistan and, especially, Iraq, we set things back decades. The hardliners took back control in Iran and have had a tight grip ever since.
Reactions: billanole and Torg 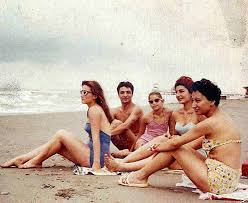 The Persians have long been very influential in the arts. They are major players in the Antiques trade both in the US and abroad. Most posters on here are probably at least vaguely familiar with the Persian (often titled Oriental) Rug/Carpet dealers.
Many I have worked with are Christian or Jewish in their faith who fled the various waves of persecution.
B

I always get the feeling that it is pride in the longevity of their Persian civilization, with Iran being a more modern name.

Whoever sold the Shah a "Warhal", hats off to that guy. Hope he sold him a couple Baskeotts as well.

By the way, my barber is from Iran, and she's wonderful. Still has a mother and sister there, and goes back to visit sometimes.

Totally agree that the animosity between the US and Iran is totally a function of the regime, not the people.
Reactions: billanole

It’s hilarious that they like Warhol. He was the embodiment of everything the regime hates and his artwork is superficial and commercial.

I’d love to see the Rothkos, Pollocks, and Hoppers, though.
You must log in or register to reply here.