Some Monkeys Use Stone Tools for Pleasure, Study Suggests Self-pleasure, that is.

Many monkeys are skilled stone handlers, using rocks to dig up roots, cut plants and crack open an array of delicacies, including fruits and nuts.
But some monkeys also appear to be using stone tools for, erm, something else. In a paper published this month in the journal Ethology, researchers report that some macaques frequently rub or tap stones around their genitals, and that these behaviors are associated with signs of physiological arousal that other stone handling actions do not prompt.
In other words, the monkeys appear to engage in “a form of self-directed, tool-assisted masturbation,” said Camilla Cenni, a doctoral student at the University of Lethbridge in Canada, who conducted the research as part of her dissertation.
Advertisement
Continue reading the main story


Some of the best known examples of tool use by wild animals revolve around the never-ending, life-or-death quest to find enough to eat: chimpanzees use sticks to collect termites, crows use twigs to extract larvae from logs, sea otters use rocks to smash snails.

The macaque study is not the first report of object-assisted masturbation in wild animals, but it provides new evidence that, in some cases at least, animals appear to use tools simply to give themselves pleasure. “It’s arguably not really adaptive or useful,” Ms. Cenni said.
The study is based on observations of a population of free-ranging, long-tailed macaques that live in or near the Sacred Monkey Forest Sanctuary in Ubud, a Balinese town in Indonesia, where the animals regularly receive food from humans.
Scientists had previously observed that these macaques frequently handle stones, with what appears to be no obvious purpose. The monkeys might clack the stones together in their hands, for instance, or pick them up and drop them over and over again.
“It’s some sort of playful manipulation, in which there doesn’t seem to be an apparent function,” Ms. Cenni said.

The monkeys also sometimes use stones to rub or tap around their genitals and groin, prompting what the researchers called the “sex toy” hypothesis.

To systematically investigate the hypothesis, Ms. Cenni and her colleagues analyzed the stone-handling actions of 173 monkeys. They found that young males engaged in the genital tapping and rubbing more than adult males did, and were especially likely to engage it in during sexually charged situations, such as when they or another macaque nearby was soliciting a mate or showing signs of sexual arousal. Moreover, the behavior tended to precede physical signs of male sexual arousal, and it lasted longer when arousal occurred — patterns that did not hold true for other kinds of stone handling.
“The data are very convincing,” said Elisabetta Visalberghi, an expert on primate cognition at the Institute of Cognitive Sciences and Technologies at Italy’s National Research Council, who was not involved in the research. “What they found is that, indeed, there was something sexual going on.” (Like any good scientist, she made sure to add the proper caveats. “The pleasure of masturbation is very hard to assess,” she noted.)
Although using a rock as a sex toy might sound unpleasant, Ms. Cenni said that she had never witnessed the monkeys making any sounds to suggest that they were in pain, as they sometimes do when they are bitten in a fight, for example. Still, she noted, the idea that this particular pursuit might cause pain as well as pleasure could not be ruled out without further testing.
The researchers theorize that the monkeys might have stumbled upon the genital tapping and rubbing while engaging in other, seemingly purposeless stone-handling actions. If true, that would fit with a scientific theory that tool use may evolve from the playful manipulation of objects.
“There might be a transformational effect from play to tool use,” Ms. Cenni said.
Still, it’s unclear how much can be generalized from a single macaque population, one that is regularly fed by humans and therefore needs to spend less time foraging than other monkey populations might. Maybe it’s a perk of leisure, Dr. Visalberghi said: “When you have free time, and you find a way of using the stones for a given purpose, why not?” 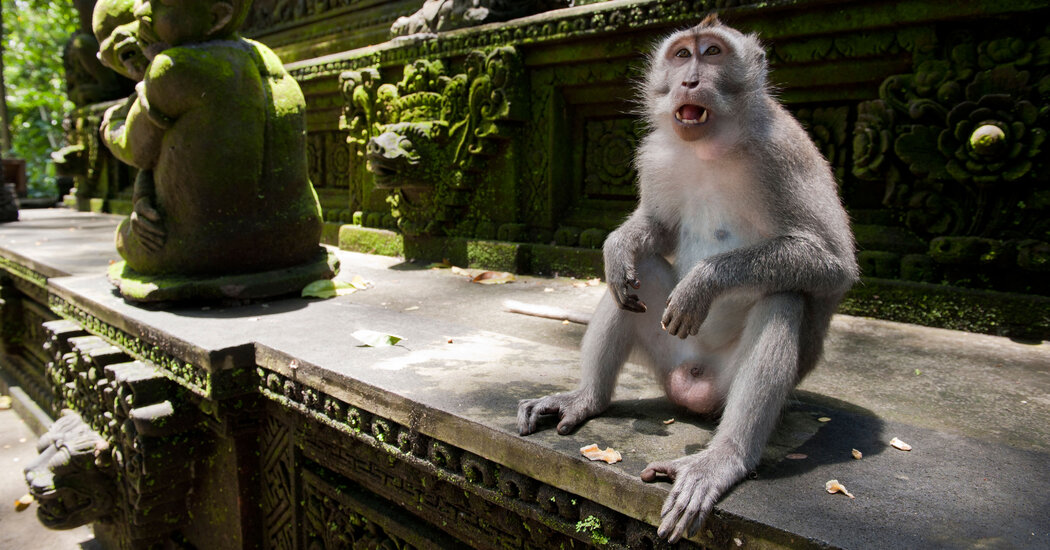 Some Monkeys Use Stone Tools for Pleasure, Study Suggests

People that take their sick kid to daycare.