Sometimes it takes a football game...


American politics is fundamentally broken because, with few exceptions, a generation of American political leaders lost sight of what the business of American politics is about. Their cynicism has contaminated belief and eroded faith in American democracy. It paved the way for the rise of a demagogue like Trump, who profoundly harmed American society during his seven years of narcissistic glory, including four as President of the United States. Trump’s rise and reign were an indictment of America’s political leaders, not the American people. The truth is that most Americans find Chuck Schumer every bit as repellent as any of the cast of characters that are his opposites on the red team.

The American media is as broken and corrupt as American politics. Exceptional reporters are as rare as exceptional political leaders and ethical business leaders. The Trump industrial complex was born with laughter and phone calls as Donald Trump was given a license to lay home in bed and call into the morning talk shows for easy banter, mild insanity and thinly veiled expositions of malice towards much of the country. Looking back, it was all disgusting and deserves to be remembered as such. The media companies made billions and American business was richly rewarded for getting on board with a cause that came within an inch of toppling the Republic within five years of Trump’s escalator descent, which marked the beginning of this rancid era.

I was with the love of my life, and I was thinking about the moment at hand. I thought about the journey that had brought us together. She’s Canadian, and this was her first Big Ten game and first trip to Iowa. We share a deep love of each other, each other’s countries and our blended family. Each time we head off to a new province, state or city, we are conscious and grateful about being able to make another stop on life’s journey and having a new shared experience. This time, it was a Big Ten football game between the great public universities of two American states situated in the heartland, and portrayed by the East Coast media as being at the precipice of civil war. It certainly didn’t feel that way.

I thought about my daughter and her journey. I thought about all of the open road ahead for her and her friends, who will likely live to the very edge, and in some cases, beyond the frontier of the 22nd century in America. I thought about their journey with no regrets about my own, and a real sense of gratitude about her happiness in the early months of her life journey away from the family and hometown where she grew up.

The 70,000 Iowa fans were dressed in black and yellow. I had gone all in as it seemed the thing to do as a father with an 19-year-old daughter at the school who I was not above embarrassing! 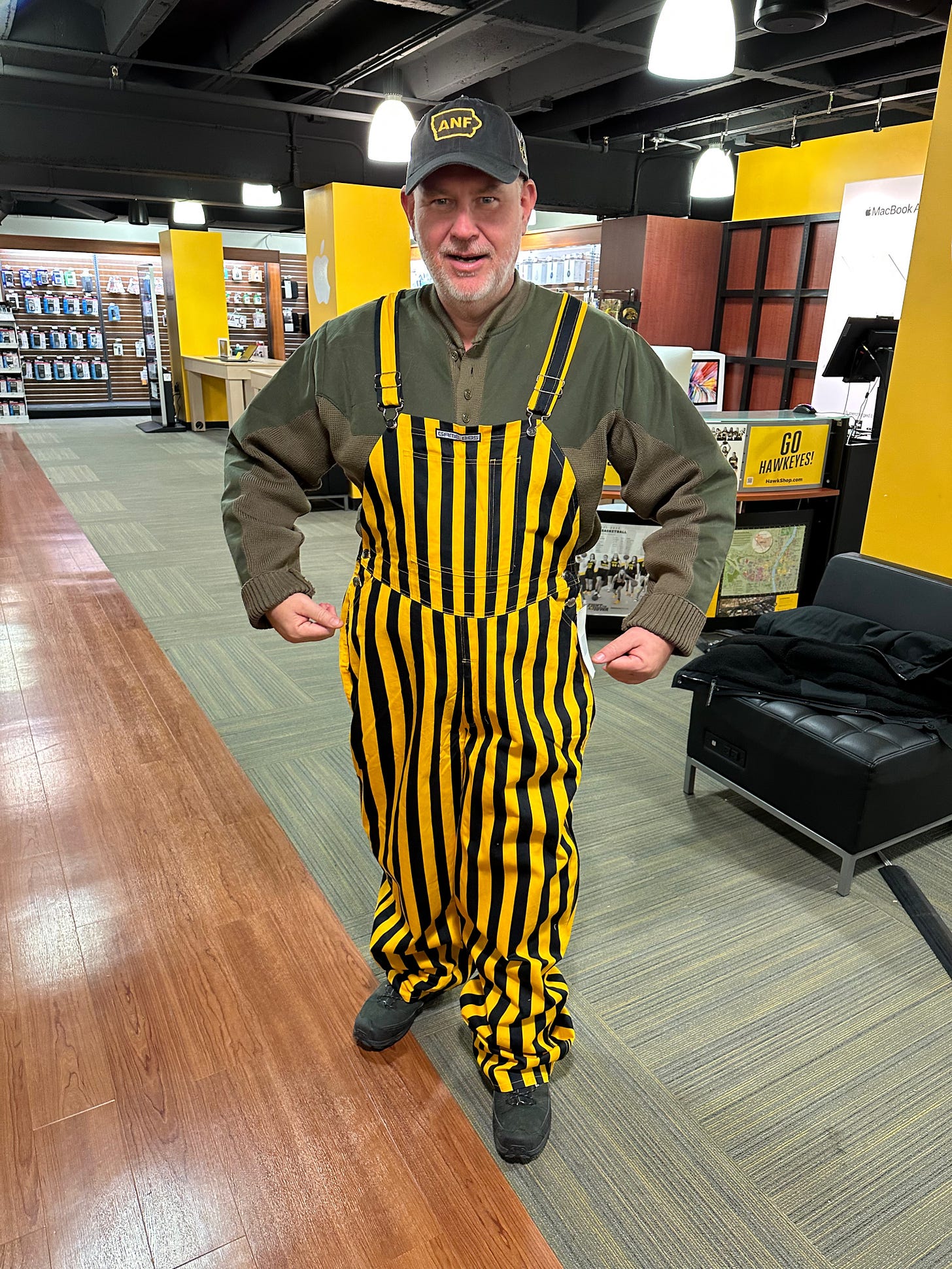 At the game, the man to my left hadn’t missed more than five Iowa home games in 35 years. The man behind me hadn’t missed one in 38 years. They were thrilled that our life journey had taken us to Iowa. We were welcomed with open arms and laughter. The people around us seemed astonished that this was our first Iowa game, and even more astonished that my wife had never been to Iowa and a big-time college football game. All of the people around us told us to get ready for the end of the first quarter. They told us something special was going to happen.

Game time drew closer and the Iowa Hawkeye marching band rolled onto the field. Awesome doesn’t begin to describe the energy, precision and sound of the Hawkeye Band. It is joyful and incandescent. Sir Elton John agrees. He tweeted out one of their epic performances that was dedicated to him a few weeks back.
Reactions: Torg, Bishop1971, unclesammy and 4 others
K

Great post and you are 100% spot on.
Reactions: iowaathletes
H

Schmitt is a true wordsmith so I am not surprised his daughter chose Iowa for her education.
Writers workshop might be in future?
Nice column that rings true.
Reactions: iowaathletes
H

My wife and I graduated from UI in 1970 and moved out of the state. We’ve been to a bunch of bowl games and a few home games in Iowa City over the past 50 years. My son went to an Ivy League college and my daughter to a great private school in Washington state, and they’d never been to a big time college football game on campus. We took them and their spouses to the Purdue homecoming game in 2019. It was an incredible day—to see them experience the pageantry and passion of an Iowa home game was something they’ll never forget, and they both talk about doing it again. For people who experience this environment multiple times every year I suppose it can become somewhat routine. But let me tell you, it’s a glorious thing and should never be taken for granted.

[My son-in-law goes to Oregon State games periodically and when, 20 minutes before kickoff in a light drizzle, there were 25% of the seats empty, he said “Looks like an OSU game”. I told him to wait a few minutes. At kickoff the place was full and rocking. He absolutely loved it.]
Reactions: Torg and iowaathletes
You must log in or register to reply here.

My farewell post to this wonderful Hawkeye community on Rivals.com

Mike Leach Was Nearly a Hawk...