The Anti-Science, anti-education, me first, everyone has rights, no one has responsibilities party:


A bill prohibiting Iowa businesses, schools and governments from dismissing employees based on their medical treatment status — such as whether they have received a COVID-19 vaccination — got a hearing Thursday that was, for the most part, about anything other than the proposal.
Some physicians questioned the judgment of the medical establishment and “three-letter government agencies” that restrict the use of anti-parasite drug ivermectin and malaria drug hydroxychloroquine, for instance. Others said physicians and pharmacists are being forced to follow federal government dictates. Some said they’ve been threatened by medical societies for their comments and practices.

However, House Study Bill 647 doesn’t address any of that. In fact, it doesn’t mention COVID-19. But the virus was, however, the impetus for his bill, according to Rep. Jon Jacobsen, R-Council Bluffs.
In general, the bill would ban face mask requirements as well as prohibit businesses and government entities from offering incentives to be vaccinated. There would be penalties for policies resulting in “forced medical treatment.”

While lobbyists for some medical groups were registered to oppose the bill — including the Iowa Hospital Association — consistent throughout the three hours of testimony Thursday was the philosophy expressed by Lee Merritt, a Logan physician, that “government is not to make us safer, but to make us freer.”


But the opposite happened over the past two years, according to Jason Crawford of Ames, who said he was terminated from his job after posting on social media his views on vaccination requirements.

“During these past few years, people I once trusted slowly began taking our freedoms in the name of safety,” he said. “At first, it was just two weeks to stop the spread, then it was just a mask, then I was just working from home for a year, then it was just working home for a second year.”
Even as federal health policy “continues to fail, and fail and fail and fail and fail,” Eric Rosenthal of Cedar Rapids told the panel of Republicans Jacobsen and Rep. Brooke Boden of Indianola and Democratic Rep. Bruce Hunter of Des Moines, that in the current environment “the political science trumps the legitimate peer review process of real fact-based science.”


He noted that there have been no laws passed mandating vaccinations and vaccine passports, or sanctions on those who refuse vaccination or other treatment protocols.
“No law has been needed in this new environment where the will of the federal government is relentlessly enforced through protocols and payoffs,” Rosenthal said.
Whether in law or not, vaccination requirements are in conflict with privacy standards, Kevin Barry, a New York human rights and civil rights lawyer, said. “And the state, in almost all cases, should stop at my skin.”

“The militarization of public health in the past two years should be of concern to every American who values life and liberty,” Barry said. “Coercion to get a COVID-19 shot went from ‘get the vaccine, have a free doughnut’ to ‘you better get your third dose or you're fired’ to ‘we're setting up quarantine cans for those who do not comply,’ which is a pending bill in New York right now.”

The New York bill, first introduced in 2015, has been withdrawn and will not be voted on.

Barry hoped Iowa HSB 647 would be a model for other states to enact.
The proposal now goes to the House State Government Committee. However, it’s not clear whether House leadership, which has supported a variety of bills resisting COVID-19 mask and vaccination requirements, will advance the bill. 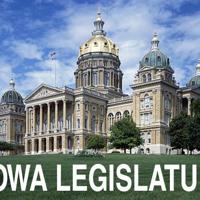 DES MOINES — A bill prohibiting Iowa businesses, schools and governments from dismissing employees based on their medical treatment status — such as whether they have received a COVID-19 vaccination

nonpareilonline.com
You must log in or register to reply here.