The saddest part of it all is that it's working:

So the final week of the midterm election campaign in Iowa certainly has been inspiring.


In a move sure to boost Iowa’s proud history on civil rights, Republican Gov. Kim Reynolds used her final, six-figure TV ad buy to take one last vindictive shot at transgender kids and schools trying to shield them from bullying and harassment.


“Here in Iowa, we still know right from wrong, boys from girls, and liberty from tyranny,” Reynolds says in the ad, titled “The Best is Yet to Come.”

“Here in Iowa, we may get up early but we're not woke. We love our country, our military and law enforcement,” Reynolds says.


Yes, the best is truly yet to come, for some. But not for those who aren’t part of a constituency Reynolds cares about — powerful agricultural interests, big business, conservative evangelicals or all things white, straight and Christian.


What’s coming for the rest of us over the next four years? Don’t ask.


OK, so it’s not the sort of freedom that allows libraries to offer books representing diverse viewpoints, permits a legal abortion for a pregnant third-grader or leaves teachers free to teach real, non- whitewashed American history to our kids. Those freedoms have fallen out of favor in Iowa. Get with the program, or get out.

And it’s definitely not the freedom to write what Republicans don’t like.


Republican Party of Iowa Chairman Jeff Kaufmann arrived in Cedar Rapids Tuesday ready to rip the media. He started by criticizing KCRG, likely because of its recent reporting questioning whether state Senate Majority Leader Jack Whitver actually lives in his new district. He made his remarks at a stop on the GOP’s bus tour. I think it was named the “Them vs. Us Bus.” Can’t be sure.


Then he turned his attention to some local columnist.


“We don’t have to worry about two-faced Todd Dorman and the rest of those clowns on the Cedar Rapids Gazette editorial board telling you what to think,” Kaufmann shouted into a microphone outside a northeast side strip mall. I wasn’t there (I received a recording), but I’m pretty sure he could be heard around the metro.


“It’s you that should care about what you think, not those left-leaning, biased, unobjective, unprofessional frauds that are not doing their professional duties,” Kaufmann said.


But my profession is writing … don’t stop him, he’s on a roll.


“Here’s my prediction with that. They’ve gone too far. I think they’ve gone too far even for the reasonable, moderate Democrats. I think we’re going to see a wave because of that. And the only people they’re going to have left is left-wing nuts and a few editorial boards of which, quite frankly, we don’t give a damn what they think,” Kaufmann said.


Funny way to show he doesn’t give a damn. He yelled so much it sounded like he was losing his voice. I hope he’s OK.


Putting minority rights up to a majority vote sure sounds swell. But the people targeted tend to lose their voices, and their rights.


Then, on Thursday, Donald Trump came to Sioux City to offer support to Reynolds and Sen. Chuck Grassley with his usual uplifting message.


“The Iowa way of life is under siege,” Trump told a large rally at the Sioux Gateway Airport, according to the Sioux City Journal’s Jared McNett. Sort of odd, considering Republicans run the joint.


"We are a nation in decline. We are a failing nation," Trump said.


This, basically, is what they’ve got. Playground taunts, screaming outrage and baseless fear mongering. OK, and maybe some more tax cuts. Don’t persuade. Drown your opponents in waves.


Yeah, I know, I’m woefully out of touch. I’ve been told that many times this year, and I expect to be told a few more times on Wednesday morning. See taunting, above.


And it’s true. I am out of touch. Maybe you feel that way too.


I’m out of touch with Iowans who want to use discrimination to make lives miserable for a marginalized minority simply to make themselves more comfortable.


I’m out of touch with people who want wave after wave of tax cuts mainly benefiting the rich while schools, universities and our mental health system scramble and scrape for dollars.


I’m out of touch with Iowans who don’t care our water is dirty, our state parks are on a starvation budget and communities have to spend millions of dollars taking nitrates out of drinking water.


I’m out of touch with people who don’t want to believe systemic racism still exists in our society, including in our criminal justice system.


I’m out of touch with people who want to ban abortion without considering the complicated, heartbreaking and potentially deadly consequences of allowing politicians to control health care decisions.


So, yes, I’m a lifelong Iowan who no longer gets Iowa. It’s sad and demoralizing. But on Wednesday morning, I’ll still be able to look at myself in the mirror. Both faces. 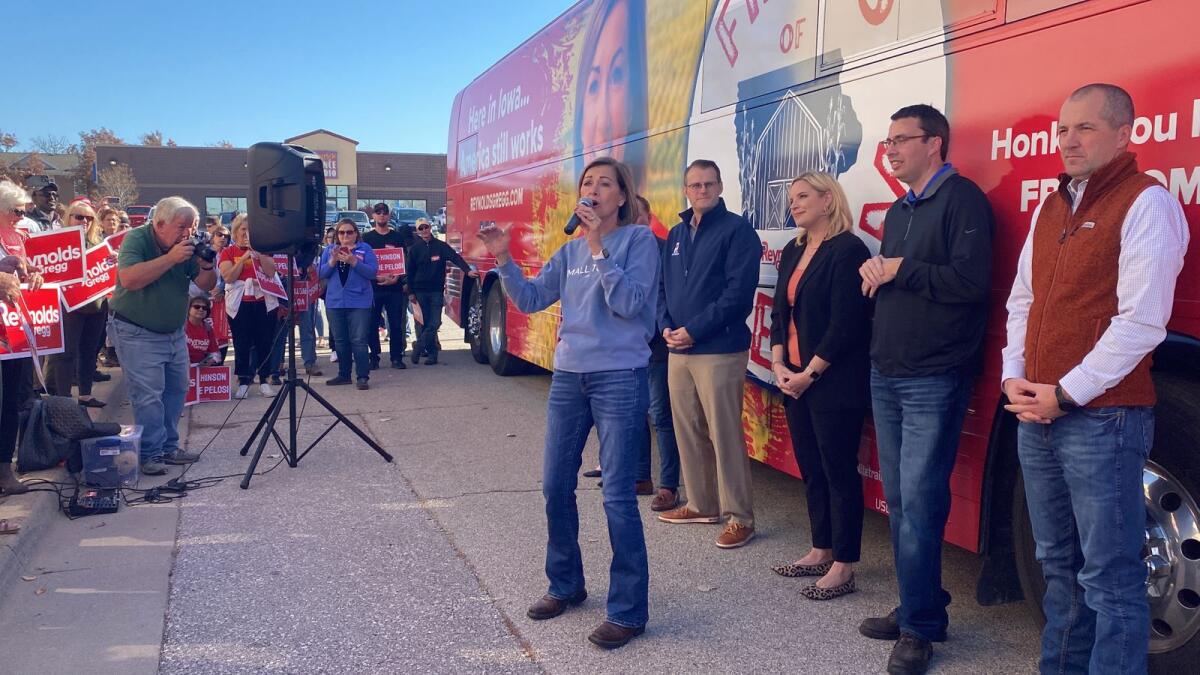 Taunts and fear are the final GOP message in Iowa

Yes, the best is truly yet to come, for some.

No news is good news for Iowa’s GOP majority

'People need food to be alive.’ Iowa GOP isn’t so sure