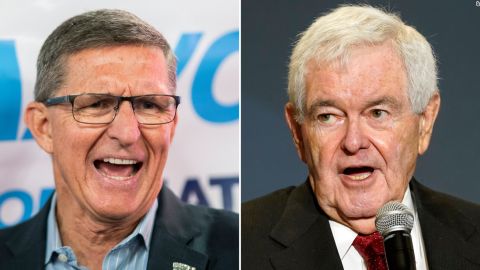 Michael Flynn and Newt Gingrich
AP
CNN —
The prosecutor leading an investigation into efforts by Donald Trump to overturn the 2020 election in Georgia is seeking testimony from an additional batch of his allies, including former national security adviser Michael Flynn and former US House Speaker Newt Gingrich.
Fulton County District Attorney Fani Willis, who is leading the investigation into 2020 election interference, filed additional court petitions on Friday seeking to secure testimony from the out-of-state witnesses in front of the special grand jury meeting in Atlanta.

Ad feedback
Willis says Flynn, Trump’s onetime national security adviser, is a “necessary and material witness” and wants the grand jury to hear from him specifically about a December 18, 2020, meeting he had with Trump, attorney Sidney Powell, and others associated with the Trump campaign, according to Friday’s court filing.
During the heated Oval Office meeting, CNN previously reported, Flynn and Powell floated outrageous suggestions about overturning the election, three weeks after Trump pardoned Flynn.
Prosecutors are interested in hearing from Gingrich about his role working with Trump’s campaign after the 2020 election, including the scheme to send “fake electorate” certificates to the National Archives and encouraging the then-President’s campaign “to air advertisements promoting the false narrative that election workers had smuggled suitcases containing fake ballots at the State Farm Arena in Atlanta,” according to the filing.

Ad feedback
CNN reported last month that the House select committee investigating the January, 6, 2021, attack on the US Capitol sent a letter to Gingrich seeking his voluntary cooperation to discuss his role promoting false claims that the 2020 presidential election had been stolen.
CNN has reached out to Flynn and Gingrich for comment.
Willis also filed court paperwork on Friday to attempt to issue subpoenas to former Trump White House lawyer Eric Herschmann and at least two other individuals who she says have valuable insight to share with the grand jury.
CNN previously reported that the district attorney aims to quickly wrap up the grand jury’s work after the midterm elections and could begin issuing indictments as early as December, according to sources familiar with the situation.
The Georgia probe – set off by an hour-long January 2021 phone call from Trump to Georgia Secretary of State Brad Raffensperger asking him to “find” the votes necessary for Trump to win the Peach State – has steadily expanded. It now covers presentations on unfounded election fraud claims to state lawmakers, the fake elector scheme, efforts by unauthorized individuals to access voting machines in one Georgia county and a campaign of threats and harassment against lower-level election workers.
Reactions: JupiterHawk

LOCK THEM UP!!
Newt is one of the biggest douche bags in the history of American politics. He slithered out into the daylight last week with his new contract designed to make him relevant again.
Reactions: JupiterHawk

It’s time we put these traitors where they belong.

Back in office, everyone deserves a second shot.

Newt, like Trump is just another fat Elvis. A guy knocking out the old material to squeeze a few bucks out of his fans. He knows what he is doing.
Flynn is crazy.
Reactions: JupiterHawk
You must log in or register to reply here.

All but two McCarthy defectors in House are election deniers