They're basically talking about us: the political hobbiests. So much time and energy, politically, is spent entertaining us. We're participating in the sport of politics. 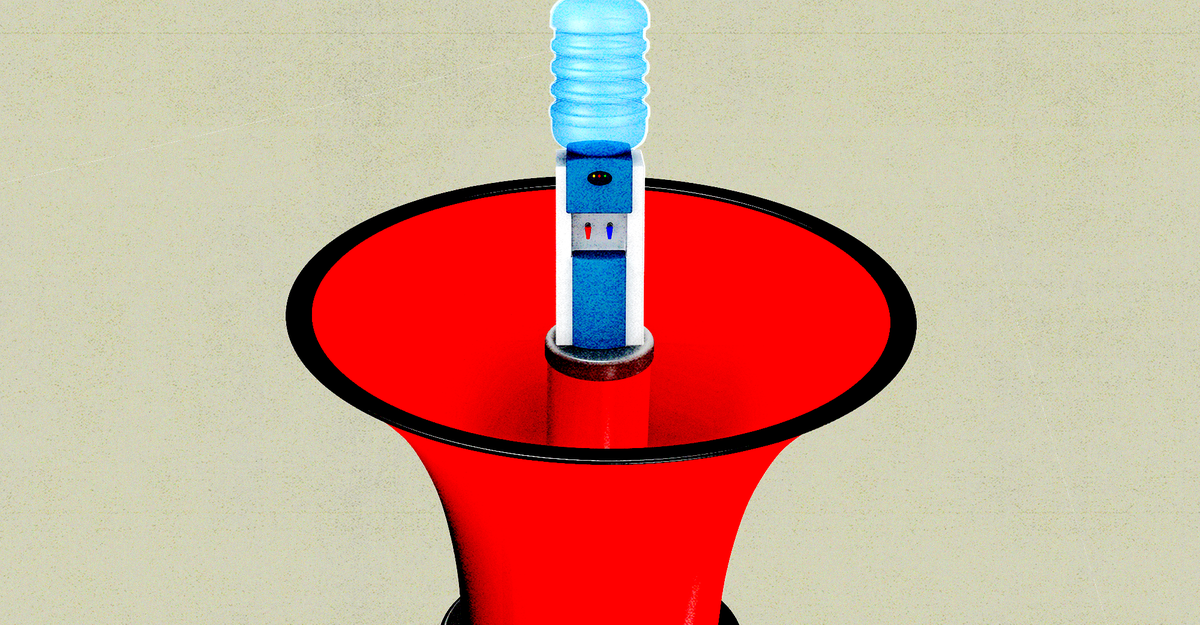 Political Hobbyism Has Entered the Workplace

A new style of activism in the white-collar workplace is reshaping corporate life.

Many college-educated people think they are deeply engaged in politics. They follow the news—reading articles like this one—and debate the latest developments on social media. They might sign an online petition or throw a $5 online donation at a presidential candidate. Mostly, they consume political information as a way of satisfying their own emotional and intellectual needs. These people are political hobbyists. What they are doing is no closer to engaging in politics than watching SportsCenter is to playing football.
For Querys Matias, politics isn’t just a hobby. Matias is a 63-year-old immigrant from the Dominican Republic. She lives in Haverhill, Massachusetts, a small city on the New Hampshire border. In her day job, Matias is a bus monitor for a special-needs school. In her evenings, she amasses power.

Matias is a leader of a group called the Latino Coalition in Haverhill, bringing together the Dominicans, Puerto Ricans, and Central Americans who together make up about 20 percent of the residents of the city. The coalition gets out the vote during elections, but it does much more than that.

It has met with its member of Congress and asked for regular, Spanish-speaking office hours for its community. It advocates for policies such as immigration reform for “Dreamers” and federal assistance in affordable housing. On local issues, the demands are more concrete. Dozens of the group’s members have met with the mayor, the school superintendent, and the police department. They want more Latinos in city jobs and serving on city boards. They want the schools to have staff available who can speak with parents in Spanish. They want to know exactly how the city interacts with U.S. Immigration and Customs Enforcement.

Matias is engaging in politics—the methodical pursuit of power to influence how the government operates. If she and the community she represents are quiet and not organized, they get ignored. Other interests, sometimes competing interests, prevail. Organizing gives them the ability to get what they want. Much as the civil-rights movement did, Matias is operating with clear goals and discipline, combining electoral strategies with policy advocacy.

Unlike organizers such as Matias, the political hobbyists are disproportionately college-educated white men. They learn about and talk about big important things. Their style of politics is a parlor game in which they debate the issues on their abstract merits. Media commentators and good-government reform groups have generally regarded this as a cleaner, more evolved, less self-interested version of politics compared with the kind of politics that Matias practices.

In reality, political hobbyists have harmed American democracy and would do better by redirecting their political energy toward serving the material and emotional needs of their neighbors. People who have a personal stake in the outcome of politics often have a better understanding of how power can and should be exercised—not just at the polls, once every four years, but person to person, day in and day out.

In the United States, political habits vary significantly by race and education. In a 2018 survey, I found that white people reported spending more time reading, talking, and thinking about politics than black people and Latinos did, but black people and Latinos were twice as likely as white respondents to say that at least some of the time they dedicate to politics is spent volunteering in organizations. Likewise, those who were college-educated reported that they spend more time on politics than other Americans do—but less than 2 percent of that time involves volunteering in political organizations. The rest is spent mostly on news consumption (41 percent of the time), discussion and debate (26 percent), and contemplating politics alone (21 percent). Ten percent of the time is unclassifiable.

Furthermore, the news that college-educated people consume is unlikely to help them actively participate in politics, because, as the Pew Research Center has found, they are more likely than non-college-educated Americans to rely on national rather than local sources of news. Daily news consumers are very interested in politics, so they say, but they aren’t doing much: In 2016, most reported belonging to zero organizations, having attended zero political meetings in the past year, and having worked zero times with others to solve a community problem.

What explains the rise of political hobbyism? One important historical explanation is the culture of comfort that engulfs college-educated white people, a demographic group that is now predominately Democratic. They have decent jobs and benefits. There has been no military conscription for some 50 years. Harvard’s Theda Skocpol argues that as the percent of Americans with a college degree has increased over time, they have come to feel less special, less like stewards of their community, and less like their communities depend on them. As the college-educated population has grown over time, community participation has, surprisingly, plummeted.

In other words, college-educated people, especially college-educated white people, do politics as hobbyists because they can. On the political left, they may say they fear President Donald Trump. They may lament polarization. But they are pretty comfortable with the status quo. They don’t have the same concrete needs as Matias’s community in Haverhill. Nor do they feel a sense of obligation, of “linked fate,” to people who have concrete needs such that they are willing to be their allies. They might front as allies on social media, but very few white liberals are actively engaging in face-to-face political organizations, committing their time to fighting for racial equality or any other issue they say they care about.
This article has been adapted from Politics Is for Power: How to Move Beyond Political Hobbyism, Take Action, and Make Real Change, by Eitan Hersh.

Instead, they are scrolling through their news feeds, keeping up on all the dramatic turns in Washington that satiate their need for an emotional connection to politics but that help them not at all learn how to be good citizens. They can recite the ins and outs of Special Counsel Robert Mueller’s investigation or fondly recall old 24-hour scandals such as Sharpiegate, but they haven’t the faintest idea how to push for what they care about in their own communities.
Reactions: Titus Andronicus and Nole Lou

If you think the status quo in politics isn’t great, then the time wasted on political hobbyism is pretty tragic. But political hobbyism is worse than just a waste of time. As I argue in my new book, Politics Is for Power, our collective treatment of politics as a sport incentivizes politicians to behave badly. We reward them with attention and money for any red meat they throw at us. Hobbyism also cultivates skills and attitudes that are counterproductive to building power. Rather than practicing patience and empathy like Matias needs to do to win over supporters in Haverhill, hobbyists cultivate outrage and seek instant gratification.

In the Democratic Party coalition, racial minorities have long operated in tension with the well-educated, cosmopolitan wing of the party. It’s a tension between those who have concrete demands from politics and seek empowerment and those who have enough power that politics is more about self-gratification than fighting for anything. Only if you don’t need more power than you already have could you possibly consider politics a form of consumption from the couch rather than a domain of goals and strategies.

In the 1950s and ’60s, there was a brief movement of activism by “amateur” or “club” Democrats, as they were called. These were middle-class white professionals who met regularly in well-to-do neighborhoods to talk about politics and push a liberal agenda, including civil rights. A criticism levied against these groups was that they were all talk. In 1967, for instance, in their book Black Power, Kwame Ture (formerly known as Stokely Carmichael) and the political scientist Charles Hamilton wrote that African Americans tried for too long to work with groups such as the club Democrats. The authors argued that liberal white professionals didn’t really value black empowerment, often actually impeded black empowerment, and failed to understand the life-and-death consequences for political power. “Let black people organize themselves first,” they wrote, “define their interests and goals, and then see what kinds of allies are available.”

Liberal white hobbyists living in well-to-do white enclaves, especially in blue states, might look at politics today and think that the important stuff is happening elsewhere—in poorer areas of their own state, in swing states, in Republican states, in Washington, D.C.—anywhere but where they live. Ture and Hamilton saw this pattern back in the 1960s. “One of the most disturbing things about almost all white supporters,” they wrote, “has been that they are reluctant to go into their own communities—which is where the racism exists—and work to get rid of it.” Fast-forward to the present day—to a world of increasing inequality in resources, where rich neighborhoods will feature yard signs claiming that everyone is welcome but where zoning rules claim otherwise: If you don’t think there is any work to do in your own town in advancing the cause of racial equality, you are not looking very hard.

In immigrant communities, minority communities, poor communities, politics is about empowerment. When politics is about empowerment, like it is for Matias, community service and political engagement are closely connected. Helping parents navigate school systems, helping neighbors fill out government forms, making sure families have health care and food and security—this is both community service and a fight for basic human needs. Those needs can also be served through attaining political power. And how does one gain power for their values, in the way that Matias does? By working in local organizations that demonstrate to a community of people that you care about their needs. Then, when an election comes or an important meeting happens, the community shows up. That’s the basic formula. That’s real politics. It’s precisely the kind of work that political hobbyists expect someone else to perform while they nod along to MSNBC.

College-educated hobbyists can engage in real politics, too. They’ll need to figure out what needs are unmet and how they can serve them. They’ll need to find local organizations in which they can serve. More fundamentally, they’ll have to figure out which communities they’re willing to fight for. As things stand, their apathy suggests that they already have figured that part out.
Reactions: Titus Andronicus
You must log in or register to reply here.

What people/ businesses/ products do you hold their politics against?

The Atlantic: It’s Not Filter Bubbles That Are Driving Us Apart

Fetterman and Walker show perfectly just how f'd up things are in American politics...