The Atlantic: How Six States Could Overturn the 2024 Election 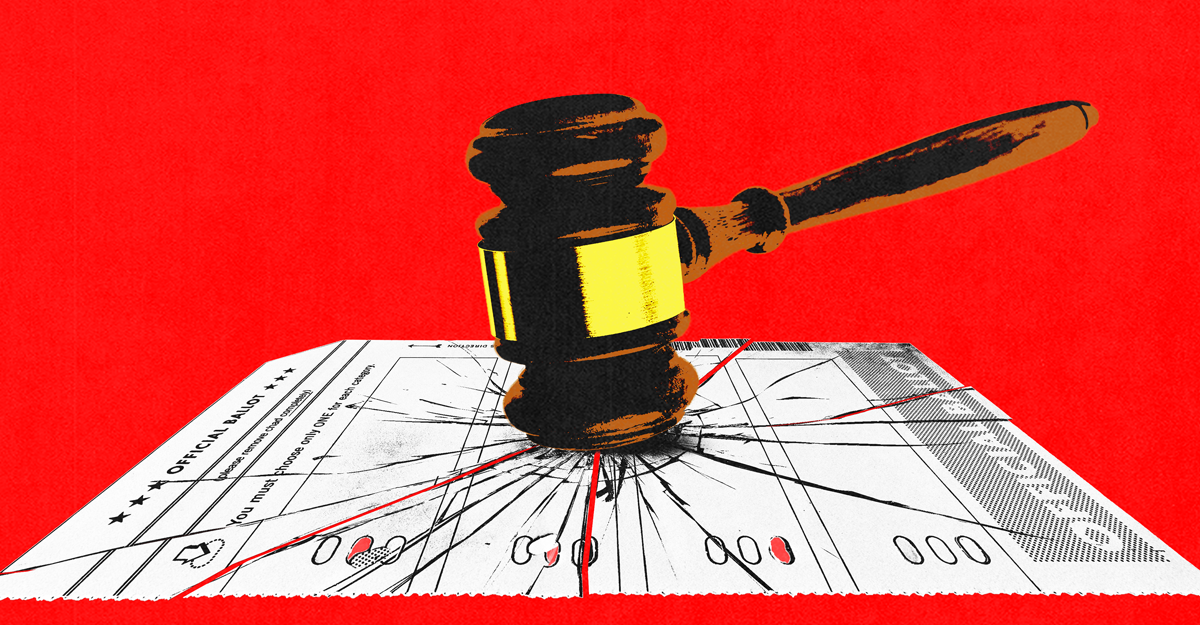 How Six States Could Overturn the 2024 Election

The Supreme Court may let state legislatures decide the presidency.

The Supreme Court may let state legislatures decide the presidency.
By Barton Gellman

Late last month, in one of its final acts of the term, the Supreme Court queued up another potentially precedent-wrecking decision for next year. The Court’s agreement to hear Moore v. Harper, a North Carolina redistricting case, isn’t just bad news for efforts to control gerrymandering. The Court’s right-wing supermajority is poised to let state lawmakers overturn voters’ choice in presidential elections.

To understand the stakes, and the motives of Republicans who brought the case, you need only one strategic fact of political arithmetic. Six swing states—Pennsylvania, Michigan, Wisconsin, Arizona, Georgia, and North Carolina—are trending blue in presidential elections but ruled by gerrymandered Republican state legislatures. No comparable red-trending states are locked into Democratic legislatures.


Joe Biden won five of those six swing states in 2020. Donald Trump then tried and failed, lawlessly, to muscle the GOP state legislators into discarding Biden’s victory and appointing Trump electors instead. The Moore case marks the debut in the nation’s highest court of a dubious theory that could give Republicans legal cover in 2024 to do as Trump demanded in 2020. And if democracy is subverted in just a few states, it can overturn the election nationwide.

Republican lawyers, taking note of their structural advantage among battleground-state lawmakers, set forth the “independent state legislature” (ISL) doctrine. The doctrine is based on a tendentious reading of two constitutional clauses, which assign control of the “Manner” of congressional elections and the appointment of presidential electors in each state to “the Legislature thereof.” Based on that language, the doctrine proposes that state lawmakers have virtually unrestricted power over elections and electors. State courts and state constitutions, by this reading, hold no legitimate authority over legislatures in the conduct of their U.S. constitutional functions.

That is a genuinely radical proposition. It has never been accepted by any state or federal court, and the Supreme Court itself ruled as recently as 2019, in Rucho v. Common Cause, that “state constitutions can provide standards and guidance for state courts to apply” in redistricting cases. In another redistricting case four years earlier, the Court confirmed long-standing precedent that “legislative” powers are defined and controlled by state constitutions. The idea that legislatures stand unbound by any limit from their own founding documents is a fringe debating point invented for Republican political advantage.


Even so, three justices—Samuel Alito, Neil Gorsuch, and Clarence Thomas—have spent two years campaigning for the independent-state-legislature doctrine in judicial statements and dissents. None of those writings carried the force of law, but together they served as invitations for a plaintiff to bring them a case suitable to their purpose. A fourth justice, Brett Kavanaugh, wrote a concurrence in which he invited the North Carolina Republicans in the Moore case to return to the Supreme Court after losing an emergency motion. Where John Roberts and Amy Coney Barrett stand on the doctrine is unclear.

The immediate question in Moore is whether the state supreme court, applying the state constitution, can override the legislature’s choice on the manner of drawing election districts. (Until ISL came along, the long-standing answer was “yes.”) But advocates of the independent-state-legislature doctrine have their eyes on a bigger prize: the presidency.

If you give the legislature a blank check on the manner of appointing presidential electors, then a Republican majority could—in the most muscular version of ISL—simply disregard a Biden victory in the state’s popular vote and appoint Trump electors instead.

Even this Supreme Court might not go that far. It might acknowledge that, once having passed a law providing for a popular vote for president, a state legislature could not strip voters of that power after they voted. But in that case, ISL still offers plenty of room to overturn the people’s will.

In litigation over the 2020 election, Texas and other Republican-led states showed exactly how that argument would work when they asked the Supreme Court to block the certification of Biden electors in four swing states. Texas argued that the election results in Pennsylvania, Georgia, Wisconsin, and Michigan were unconstitutional because “executive and judicial officials made significant changes to the legislatively defined election laws,” for example by changing deadlines for mail-in ballots because of the coronavirus pandemic. The Supreme Court made no ruling on the merits, declining to hear the case because Texas had no standing to sue.


But if the Supreme Court adopts the ISL doctrine in Moore, the argument that Texas made will become a model in 2024. The conditions that Texas cited in its argument are almost always present in contemporary elections. Legislatures pass laws on the conduct of the vote, but election administrators have to interpret those laws and set implementing rules such as precinct locations, polling times, and counting procedures. State courts sometimes mandate changes in the rules to comply with their state constitutions. It’s all but impossible to conduct an election without making rules or choices that the legislature did not specifically authorize.

The pernicious threat of ISL, wrote Richard L. Hasen, an election-law expert at UCLA, is that “a state legislature dominated by Republicans in a state won by Democrats could simply meet and declare that local administrators or courts have deviated from the legislature’s own rules, and therefore the legislature will take matters into its own hands and choose its own slate of electors.”

But in a commentary on the Moore case, former White House Counsel Bob Bauer and the Harvard Law Professor Jack Goldsmith identified another legal threat to presidential elections that they regard as more serious. According to the Electoral Count Act, state lawmakers may discard presidential voting results and appoint electors instead by declaring that the voters have “failed to make a choice”—a phrase that is undefined in the law and was exploited in rogue vote-stealing efforts in 2020. A legislature could seize on any irregularity, or baseless allegations of fraud, to claim that voters had failed to make a choice.
Reactions: Moral

This scenario is gravest if Republicans win back the House and Senate in November. It is the job of Congress to make a formal count of presidential electors, and the political interests of a GOP-led House and Senate would align with GOP state lawmakers who appointed GOP electors.

This is where reform of the Electoral Count Act, a 19th-century statute, comes in. I have written before, at length, about flaws in that law that leave the nation at risk of a broken election. A bipartisan group of senators led by Joe Manchin and Susan Collins released a draft bill last week that would make it harder for state lawmakers—or Congress—to subvert a presidential election.

Prospects for the bill’s passage are unclear, but the draft would make several valuable reforms. For one thing, it deletes the whole provision allowing lawmakers to appoint electors if voters have “failed to make a choice” on Election Day. Instead it mandates that electors “shall be appointed, in each State, on election day, in accordance with the laws of the State enacted prior to election day.” That clears up important ambiguities and forbids a state legislature to change the rules after the voters have cast their ballots.

The draft also attempts to ensure that there can be only one valid slate of electors certified in each state, specifies that the governor is (usually) the certifying authority, and gives jurisdiction to federal courts to certify a slate of electors if the state refuses to do so. If Congress passed the law, it would be agreeing to accept as “conclusive” the state’s or the court’s decision on which electors to certify.


Some of the nation’s leading election-law scholars have welcomed the bipartisan draft. But it’s unclear whether the Supreme Court’s right wing would accept the rewritten statute as constitutional. The Collins-Manchin bill arguably strips Congress of powers it holds under the Twelfth Amendment to decide which electors to count, and the Court might decide that Congress cannot relinquish those powers. Proponents of the independent-state-legislature doctrine, meanwhile, may be skeptical of giving final say on certification of electors to a governor or a federal judge, rather than to the legislature. Alito, Thomas, Gorsuch, or other justices may likewise be unwilling to accept that Congress can prevent state lawmakers from appointing an alternative slate of electors when the outcome of an election is in controversy.

Whether or not Congress decides on statutory reform, Moore could set the stage for a major shift in voting law in the run-up to the 2024 election. The Court’s right wing appears to be spoiling for that. Under traditional norms for granting certiorari, the Supreme Court would not even have put this case on its calendar. The petitioners, led by the Republican speaker of the North Carolina House, never made the ISL argument during their state trial, and legal parties ordinarily cannot raise a question on appeal that they have not raised below. According to the latest proposed schedule, the Supreme Court won’t hear Moore sooner than December. On its face, the case will be moot by then: The North Carolina redistricting map applies only to the 2022 election, which will take place the month before. Nor is there a significant conflict of opinions in lower courts for the justices to resolve.

None of these factors restrained the Supreme Court’s right-wing justices. Just as they did in overturning Roe v. Wade, a ruling they need not have made to uphold the Mississippi abortion law, the right-wing justices seized on the first available vehicle for a paradigm-shifting decision. Nothing good will come of it.
Reactions: Moral

It’s gonna be an absolute disaster when this gets through SCOTUS. Will be the next Citizens United in terms of long term negative impacts to American political society.

StormHawk42 said:
It’s gonna be an absolute disaster when this gets through SCOTUS. Will be the next Citizens United in terms of long term negative impacts to American political society.
Click to expand...

It's a bit scary, for sure. There may be some argument for the interpretation of the doctrine which gives the state legislature the power republicans are clamoring for here. I don't know where I would end up after exploring this question thoroughly.

Regardless... it seems plainly a bad idea that runs counter to our expectations of how free and fair elections ought to be conducted. The risks are quite clear.

Yeah, you might be able to concoct a salient legal argument (due in part to vagueness of language and intent) ... but for what?

The what isn't good.
You must log in or register to reply here.

Off Topic Yesterday at 4:29 PM
cigaretteman

Opinion Why the Trumpist threat in 2024 just got more dangerous