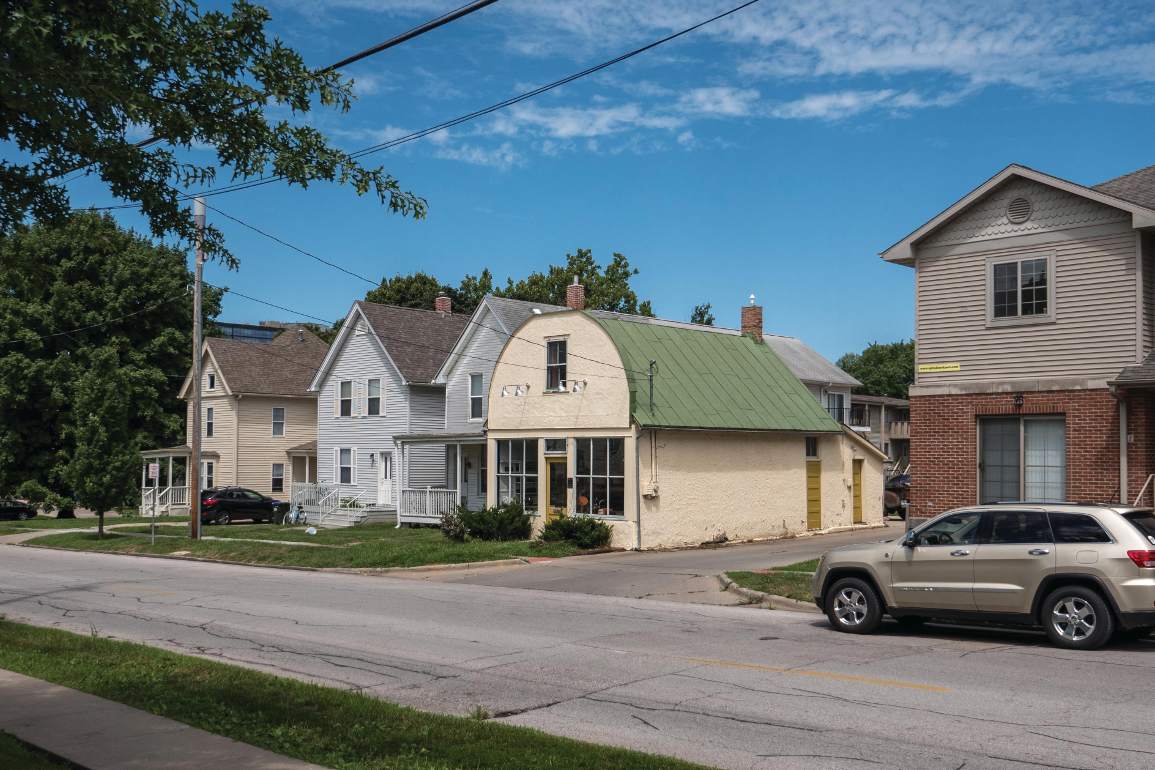 In 2014, a small building on the block between South Johnson and South Van Buren streets in Iowa City was added to the National Register for Historic Places. Its inclusion was well-warranted; it had served as a small grocery store for nearly a century, beginning in the late 1800s. The store at 518 E Bowery St is one of the only buildings remaining from the initial development of the area, and incredibly well-preserved at that. Its presence speaks to a time before supermarkets came in and shuttered local grocers.

On the building’s nomination form, researchers theorized that, prior to Bowery Street becoming a haven for student rental properties, its residents were largely working class, employed by the factories and workshops that used to line Gilbert Street or by trades associated with the nearby railroad. Left out of this picturesque narrative of a resilient little storefront surviving over a century of change, however, is something more nefarious: the contrived efforts made to prevent people of color from living in or purchasing property in the neighborhoods surrounding this old grocery store — people like myself included.

During the heyday of the Bowery Street corner store, Iowa City avoided some of the more egregious forms of housing segregation, such as the notorious redlining system created by the Home Owners’ Loan Corporation in the 1930s, applied in Davenport, Des Moines, Cedar Rapids and even Dubuque. Perhaps this was due to the relatively small size of the city at the time. (Iowa City’s population boosted after 1945, as people flocked to higher education, and again in the ’70s following post-industrial stagnation in towns such as Waterloo and Dubuque.) Or, given the fact that only 0.73 percent of the city’s population in 1930 were nonwhite (down to 0.53 percent in 1940), bureaucrats may not have seen it necessary to differentiate between “desirable,” “declining” and “hazardous” neighborhoods, given they were all exceedingly white.

Nonetheless, enterprising white people in Iowa City found other means of writing racial segregation into the built landscape. One was the inclusion of race-based restrictions in housing covenants. Essentially a list of conditions upon which a property was bought and sold, covenants were common before municipal zoning laws or building codes regulated building placement, land use or other minutiae, such as the ability to raise livestock in your backyard. However, another clause found its way into many covenants — one prohibiting the sale or occupancy of a property to people deemed nonwhite or Jewish, designating a property for the “sole and exclusive use and benefit of the Gentile people of the Caucasian Race.”


In these race-restricted covenants, the presence of nonwhite or Jewish individuals owning or living in a property was tantamount to raising cattle, opening a gas station or setting up a camping ground in a residential neighborhood. All were regarded as potential nuisances that would hurt an area’s reputation or property values, and thus were prohibited for the common good.

In some areas, such as the near entirety of University Heights, racially restrictive covenants accompanied brand-new developments, eliminating the mere possibility of integrated neighborhoods. In other cases, such as the area around Bowery and South Johnson Street, covenants were established in the 1940s, decades after the streets were platted out and houses first built there, some of which still stand today. These covenants would not be found to be a violation of the equal protection clause of the 14th Amendment until the passage of the Civil Rights Act in 1968 — less than two years before the planned termination date of the covenant, Jan. 1, 1970.

The erasure of immigrant and minority history in our human-made environment is all around us, even if — by its very nature — evidence of erasure can be somewhat elusive.

For example, in my hometown of Cedar Rapids, the historic Bethel AME Church is now surrounded by parking lots and clinics for the MedQuarter medical district, the Black neighborhood that it once served having been “obliterated by the development of Mercy Medical Center,” per the building’s Wikipedia page. One of the few Cedar Rapids locations in The Negro Motorist Green Book is now a staff parking lot for that very same hospital, without any indication of what used to be there.

In less than two years, from 1967 to ’69, a Hispanic neighborhood by the Cargill plant downtown was completely demolished to make way for a cloverleaf exit on I-380, Exit 20B. Is it merely a coincidence that Czech immigrants were relegated to a low-lying flood plain near the meatpacking factories on what was then the edge of town? The entirety of what is now considered to be New Bohemia, Czech Village and the Oak Hill Jackson neighborhood was redlined as “hazardous” by the Home Owners’ Loan Corporation.

Historic preservation enthusiasts (who tend to skew white, female and elderly) pine for the old days, when there was nary a McMansion in sight. However, the dominant, nostalgia-driven narratives in historic preservation also routinely erase the darker aspects of urban development in the United States prior to 1968. That foursquare house with the great big porch out front? It was first built in 1926, “Sale To Whites Only.” That cute bungalow your friend always points out when you go on a walk with her? “No Jews Either.” Those details tend to be left out of the National Register of Historic Places registration form.

Rules for determining the supposed significance of a building in order for it to be preserved, while ostensibly unbiased, in practice gravitate towards associating that building with civic or business leaders — people who, especially in the past, tended more likely than not to be white, male and wealthy. Furthermore, it is the buildings associated with the wealthier and the whiter that are more likely to be spared the bulldozer and wrecking ball in the first place, or to be photographed and written about in public records for posterity. By design, housing injustices were often unrecorded: verbal agreements with no documentation, steering by real estate agents or a landlord simply refusing to rent rooms to people of color — some of which still goes on today — were common.

Ironically, as preservationists interact primarily with what still exists, they fail in their mission to remember the past. They perpetuate the erasure of what has previously been deemed insignificant, superfluous or threatening to those in power.

In response to these biases and oversights, as well as in the context of recent demonstrations against systemic racism in the United States, a subcommittee has been formed in the Iowa City Historic Preservation Commission in order to “preserve historically underrepresented communities’ stories and consider how to share those stories,” upon the suggestion of the current chair, Kevin Boyd. Some work has already been done to that effect, such as the preservation and commemoration of Tate Arms and the Iowa Federation Home, living spaces for Black students at the University of Iowa at a time when non-white students were prohibited from the dormitories.

However, there is still much that should be done. City and Commission efforts to study and preserve what remains of Iowa City’s first Black and Hispanic neighborhoods — largely in the current Riverfront Crossings East District and around Oak Grove Park, respectively — would be a good start. Until then, I encourage readers to browse the online project Mapping Segregation in Iowa City, headed by Professor Colin Gordon at the University of Iowa, which provided much of the information in this article.

There is a particular dissonance between my fondness for old buildings and my likely exclusion from many of them when they were first built. To imagine a time — one when my grandparents were university students themselves — that I would have been banned from living in a space by virtue of the color of my skin (unless I was a member of the help; there was often an exception for “employment-occupancy by domestic servants who are not caucasian”), leaves me at a loss for words.

To use social progress as cover for transgressions in our community’s past would be a disservice to the practice and a deliberate distortion of history. This dissonance mentioned earlier need not be seen as a point of exclusion or shame—but rather as a point, among many, from which to form a more inclusive and open practice of historic preservation in Iowa.