For 50 years, Alaska’s lone House seat was held by the same larger-than-life Republican — a sharp-edged congressman with a history of incendiary remarks.
The woman leading the race to replace Representative Don Young after Tuesday’s electoral contests is in many ways his opposite: a Democrat with a reputation for kindness, even to the Republicans she is trying to beat.
On Election Day, Mary Peltola, 48, exchanged well wishes over text with her more famous and more outspoken Republican rival on the ballot, Sarah Palin. The two have been close since they were both expectant mothers working together in Alaska’s Statehouse, Ms. Palin as governor and Ms. Peltola as a lawmaker.
Advertisement
Continue reading the main story


“I think respect is just a fundamental part of getting things done and working through problems,” Ms. Peltola told reporters Tuesday, explaining her approach to campaigning as the first vote tallies rolled in.

Ms. Peltola, 48, was leading Ms. Palin, 58, in unofficial results on Wednesday, a strong showing that thrilled and surprised Democrats eager to see her become the first Alaska Native in Congress and the first woman ever to hold the seat.
Ms. Peltola, who is Yup’ik, is seen as having the same independent streak and devotion to Alaskan interests as Mr. Young, who died in March. Her father and the longtime congressman were close friends, and, as a young girl, she would tag along as he campaigned for Mr. Young. But she sharply diverges from Mr. Young and her top Republican contenders, including Ms. Palin, in her support for abortion rights, her understanding of fishing industries, her clear warnings about climate change and her commitment to sustain communities over corporate interests in developing Alaska’s resources.
“Mary has a real shot at this,” said Beth Kerttula, a Democrat and former minority leader of the Alaska House who served with Ms. Peltola in the State Legislature.
The winner of the House race could remain unknown for days or even weeks as Alaskan election officials continue to count mail-in ballots sent from some of the most far-flung reaches of the state.

Ms. Peltola took 38 percent of the vote in the special election to fill the House seat through January. She is ahead of two top Republicans: Ms. Palin, the state’s former governor and Senator John McCain’s 2008 running mate, and Nick Begich III, a businessman and son of the best-known Democratic family in Alaska politics. Ms. Peltola was also leading Ms. Palin, Mr. Begich and 20 other candidates in a second, separate primary race to fill that seat beyond 2023. If she wins the special election to fill the seat immediately, she will have an incumbent’s advantage in the general election in November.

Ms. Peltola has sought to highlight her Native roots in a state where more than 15 percent of the population identifies as Indigenous. As a Yup’ik woman, she said, she has sought to use the teachings of her community in her broader appeals for bipartisanship. “Dry fish and pilot bread — that is how I got other legislators in the room when I was rebuilding the bipartisan Bush caucus,” she said in an ad introducing herself to voters. (“Bush caucus” refers to a group of legislators from rural Alaska.)

On Tuesday night, Ms. Peltola mingled with a couple dozen supporters at a brewery in central Anchorage. She embraced relatives, campaign workers and longtime friends who had served with her in the Legislature. “I’ve really been an advocate of thinking beyond partisanship and seeing people beyond party lines,” she said in an interview. “I think Alaskans are very receptive to that. We often vote for the person and not the party.”
Ms. Peltola — the only Democrat in the 22-candidate primary — served in the Alaska House from 2009 to 2019 before becoming the executive director of the Kuskokwim River Inter-Tribal Fish Commission, which works with tribes to manage salmon resources. She has also served as a councilwoman in Bethel, a small city in western Alaska, and as a judge on the Orutsararmuit Native Council Tribal Court.
She has had a sharp rise in the public eye since she came in fourth out of 48 people in a June special-election primary. The candidates included Ms. Palin, Mr. Begich and even a councilman legally named Santa Claus. Al Gross, an independent who unsuccessfully ran for Senate in 2020 and came in third, soon dropped out of the race and endorsed Ms. Peltola, helping clear her path for a strong performance on Tuesday.
Democratic and Republican pollsters and strategists said Ms. Peltola’s lead in the race stemmed from her focus on forging a coalition across class, party and ethnic lines, the skepticism of Ms. Palin’s political comeback and the bickering between Ms. Palin and Mr. Begich in the campaign. Another advantage was the new, complex voting system that allowed voters on Tuesday to rank their preferences in the special election and was widely seen as designed to favor more centrist candidates.
Leaving a polling location in South Anchorage, Maeve Watkins, 52, a nurse, and her 20-year-old daughter, Isabelle, a university student, said they were drawn to Ms. Peltola for her strong stance on abortion rights and her pledges to protect Alaska’s resources.
“She is a quiet force,” Ms. Watkins said. “She is such a good listener. She’s all about kindness and hearing from everyone, but, at the same time, she has a backbone.” 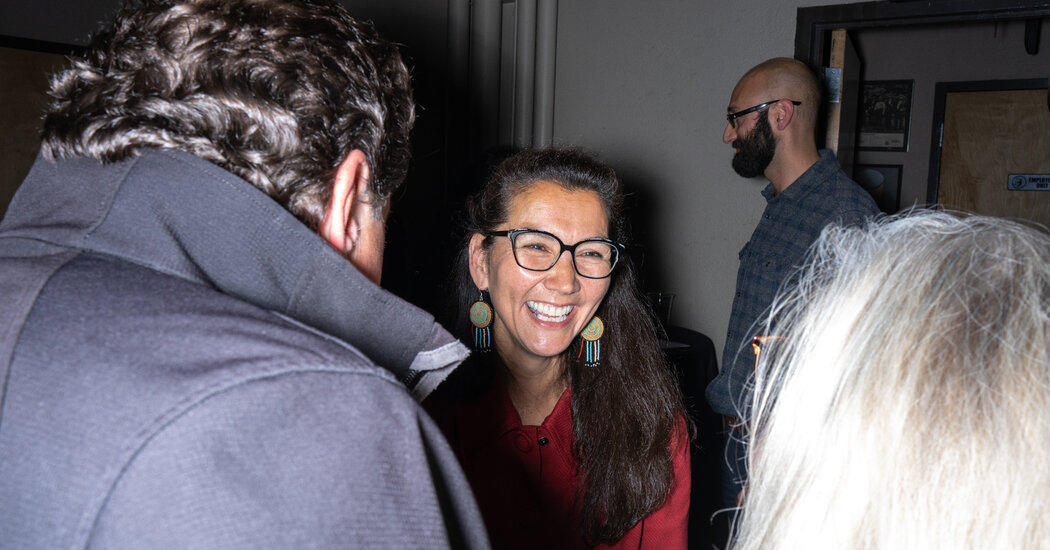 Mary Peltola, a former state lawmaker, surprised even some of her own supporters by taking the lead over Sarah Palin for an open congressional seat.

Need to replace the lying Governor too.
You must log in or register to reply here.

Alaska GOP votes to censure McConnell over his support for Murkowski

Analysis: Could Sarah Palin have cost the GOP a House seat?

The Eagerness of Ginni Thomas