The Jan. 6 committee, which held its ninth and likely final hearing last Thursday, has lionized the figure of the Decent Republican.
Liz Cheney, the vice chair of the committee, was its obvious star, imbued with moral authority by the fact that she’d sacrificed her position in Republican leadership, and possibly her political career, to stand up to Donald Trump. But there were many others.
Rusty Bowers, the Trump-supporting speaker of the Arizona House who refused to help the former president subvert his state’s election results, was a portrait of rectitude, reading from his journal, “I will not play with laws I swore allegiance to.” Cassidy Hutchinson, a former top aide to Trump’s chief of staff, defied attempts at intimidation to describe a president at once calculating and berserk.
“When you look back at what has come out through this committee’s work, the most striking fact is that all this evidence comes almost entirely from Republicans,” the committee’s Democratic chairman, Bennie Thompson, said on Thursday.
Advertisement
Continue reading the main story


This attempt to separate Trump from the Republican Party made political sense. The committee was trying to reach beyond committed Democratic voters who were already appalled by Trump, and the Republicans who testified had the credibility that comes with acting against their own political interest. But the emphasis on Republican valor meant that the story the committee told, while compelling, was incomplete. Going forward, the threat to the American experiment comes not just from Trump but from the Republican base, which is making the figure of the Decent Republican a quaint curiosity.
The problem for Decent Republicans is that their party’s internal democracy makes a commitment to democracy writ large impossible. For decades, prominent right-wing politicians, pastors and pundits — Cheney very much included — cultivated in their base the belief that Democrats represent totalitarian evil. Not surprisingly, the base came to see Democratic victories as intolerable, and rejected candidates who would respect the results of general elections. As The Washington Post reported, a majority of Republican nominees for House, Senate and important statewide offices either doubt or deny that Joe Biden won in 2020.

Plenty of Republican officials, and ex-officials, wish it were the reverse. Draper has a detailed re-creation of the Feb. 3, 2021, meeting where House Republicans first voted on removing Cheney from her position as Republican conference chair, a vote she survived. “How is it going to look if we kick out Liz Cheney and keep Marjorie Taylor Greene?” asked Tom Reed, a moderate Republican from upstate New York.
Advertisement
Continue reading the main story


Initially, Kevin McCarthy, House minority leader, persuaded the party to close ranks behind both Cheney and Greene. “I’m not letting Dems pick us off one by one,” he said, adding: “You elected me leader. Let. Me. Lead.”

But McCarthy is, fundamentally, a follower. By May, Draper writes, House Republicans were telling him that “Cheney was becoming a major distraction and a problem for their voters back home.” Greene, meanwhile, had a deep connection to those voters, who considered Democrats demonic and the elections they win fake. This gave her power that McCarthy deferred to.
According to Draper, McCarthy invited Greene “to high-level conferences in his office, making a show of sitting next to her and soliciting her opinions.” Last year Democrats stripped Greene of her committee assignments for promoting conspiracy theories and suggesting that the House speaker, Nancy Pelosi, should be executed. If Republicans win the House, McCarthy has promised to put Greene on more powerful committees than she was on before. A source told Draper that McCarthy even offered Greene a leadership position.
The truth is, if Republicans win — a recent New York Times/Siena College poll shows them ahead by three points among likely voters — Greene will be a leader no matter what McCarthy does. Chances are she’ll be at the forefront of an expanding MAGA squad, with at least one Republican who was at the Capitol on Jan. 6, and maybe more. A Georgia Republican who has promised to be a “great teammate” for Greene, Mike Collins, has a campaign video in which he shoots a gun at what looks like a garbage can full of explosives marked “Voting Machine.”
It goes without saying that these Republicans will disband the Jan. 6 committee and impeach Joe Biden. They’ll probably seek vengeance for Greene — and Paul Gosar, who lost his committee assignments for tweeting an anime video altered to show him killing Alexandria Ocasio-Cortez — by stripping Ocasio-Cortez and other progressives of their committee assignments. Expect them to shut down the government more than once and to launch investigations into the Department of Justice over its investigation of Trump. If the 2024 election is disputed, they’ll do all they can to swing it to Republicans. It’s what their voters are sending them to Congress to do.
“Our institutions only hold when men and women of good faith make them hold, regardless of the political cost,” Cheney said at the most recent Jan. 6 hearing. “We have no guarantee that these men and women will be in place next time.” Indeed, we have a guarantee that many of them won’t be. 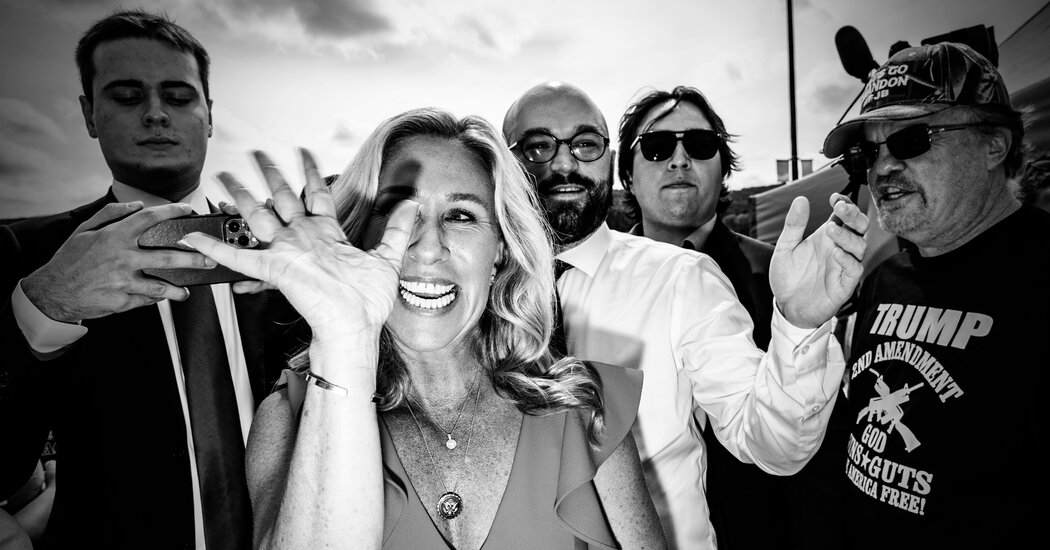 The Jan. 6 hearings were the final hurrah for Decent Republicans.

This must be one of the shithole countries Trump talked about
Reactions: Rudolph, win1forthe, lucas80 and 2 others

She was one of the Republicans that was run off because she refused to lie.
Reactions: Rudolph, ThorneStockton, runkpanole and 4 others

Sad, but not surprising.

The GOP and their conservative media ecosystem helped create this monster, and now they're beholden to it. It sucks for them, and it really sucks for the rest of us.
Reactions: cigaretteman and lucas80
R

MTG just might win the Trump suckage contest and be chosen by him as his running mate. Could you imagine those two dumb arses campaigning together?

Randon said:
MTG just might win the Trump suckage contest and be chosen by him as his running mate. Could you imagine those two dumb arses campaigning together?
Click to expand...

Only in Federal prison

Randon said:
MTG just might win the Trump suckage contest and be chosen by him as his running mate. Could you imagine those two dumb arses campaigning together?
Click to expand...

Kari Lake most likely. Sarah Sanders is devoted and a skilled propagandist, but, Trump will want a woman who looks good. Kimmie is too old.
You must log in or register to reply here.

Off Topic Thursday at 12:44 PM
funksouljon

Off Topic Friday at 9:57 AM
DFSNOLE