The Myth of the Good Trump Official

A central theme of the Jan. 6 hearings has been Republican redemption. A parade of Republican witnesses has testified to being pushed beyond the limits of their loyalty to Donald Trump. For some, the breaking point came when he tried to enlist them in a scheme to overturn state elections. Others revolted at the former president’s attempts to corrupt the Justice Department, or at his role in inciting an insurrection. A rioter, awakened to Trump’s lies, testified about being misled; in a poignant moment after the seventh hearing, he apologized to the Capitol Police.
Republican Representative Liz Cheney, the Jan. 6 committee’s vice chair, has been perhaps its most prominent voice. At Thursday’s prime-time hearing, the last until September, she painted die-hard believers in Trump’s big lie as noble victims. “Donald Trump knows that millions of Americans who supported him would stand up and defend our nation were it threatened,” said Cheney. “They would put their lives and their freedom at stake to protect her. And he is preying on their patriotism. He is preying on their sense of justice. And on Jan. 6, Donald Trump turned their love of country into a weapon against our Capitol and our Constitution.”
It is a sign of the committee Democrats’ love of country that they have allowed the hearings to proceed this way. They are crafting a story about Jan. 6 as a battle between Republican heroism and Republican villainy. It seems intended to create a permission structure for Trump supporters to move on without having to disavow everything they loved about his presidency, or to admit that Jan. 6 was the logical culmination of his sadistic politics.
Advertisement
Continue reading the main story


If you believe, as I do, that Trump’s sociopathy makes him a unique threat to this country’s future, it makes sense to try to lure Republicans away from him rather than damn them for their complicity. There is a difference, however, between a smart narrative and an accurate one. In truth, you can’t cleave Trump and his most shameless antidemocratic enablers off from the rest of the Republican Party, because the party has been remade in his image. Plenty of ex-Trump officials have come off well in the hearings, including the former deputy national security adviser Matthew Pottinger, the former acting attorney general Jeffrey Rosen and, in video testimony, the former White House counsel Pat Cipollone. That shouldn’t erase the ignominy of having served Trump in the first place.

I have a lot of respect for Cheney, who is likely sacrificing her future in Republican politics in her attempt to hold Trump accountable, and for the bravery of witnesses like Cassidy Hutchinson, who testified despite the Trump camp’s reported attempt to intimidate her. But whatever they say now, the witnesses who worked for Trump enabled his mounting authoritarianism. Each contributed, in his or her own way, not just to Jan. 6, but also to eroding our democracy so that Jan. 6 may be just a prequel. Each helped bring us to a point where, according to a recent survey, more than half of Americans believe a civil war will erupt in the United States in the near future.

“It was a privilege to serve in the White House,” Pottinger said during his testimony on Thursday. “I’m also very proud of President Trump’s foreign policy accomplishments.”
Pottinger worked for the Trump administration from its beginning until Jan. 7, 2021. He was one of many who didn’t resign over Trump’s defense of the rioters in Charlottesville, Va., his attempted extortion of President Volodymyr Zelensky of Ukraine or his claims to have won an election he clearly lost, to cite just a few milestones. During Pottinger’s testimony, he said that Jan. 6 “emboldened our enemies by helping give them ammunition to feed a narrative that our system of government doesn’t work, that the United States is in decline.” But there’s no way to separate that from the rest of Trump’s legacy, or from Pottinger’s own. He shouldn’t be proud.

One of the few Trumpists who seems to have really reckoned with what she participated in is Stephanie Grisham, who is Trump’s former press secretary, though she never held a news conference. “I don’t think I can rebrand; I think this will follow me forever,” she told New York magazine’s Olivia Nuzzi last year. “I believe that I was part of something unusually evil.”

They all were, everyone who kept that catastrophic administration functioning at a minimal level while Trump built the cult of personality that made Jan. 6 possible. It’s important to remember their culpability because Trump is probably going to run for president again, and he could win. If he does, Republicans who like to think of themselves as good people, who don’t want to spend their lives in the right-wing fever swamps, will be faced with the question of whether to serve him. They will see the former Trump officials who were able to rebrand despite sticking with him almost to the end, and they might think there’s not much to lose.
In his bracing book, “Why We Did It: A Travelogue From the Republican Road to Hell,” Tim Miller, a former Republican National Committee spokesman, tries to understand why friends and associates who once hated Trump eventually submitted to him. “There were thousands of people who at some level complied with Trump who weighed the costs,” he wrote. “Who knew the dangers,” who might have chosen a different path if “they could have imagined a different, more fulfilling future for themselves.” The Jan. 6 committee is trying, against the suck of Trump’s dark gravity, to point the way to such a future. To do that, it has been liberal with absolution. That doesn’t mean absolution is deserved. 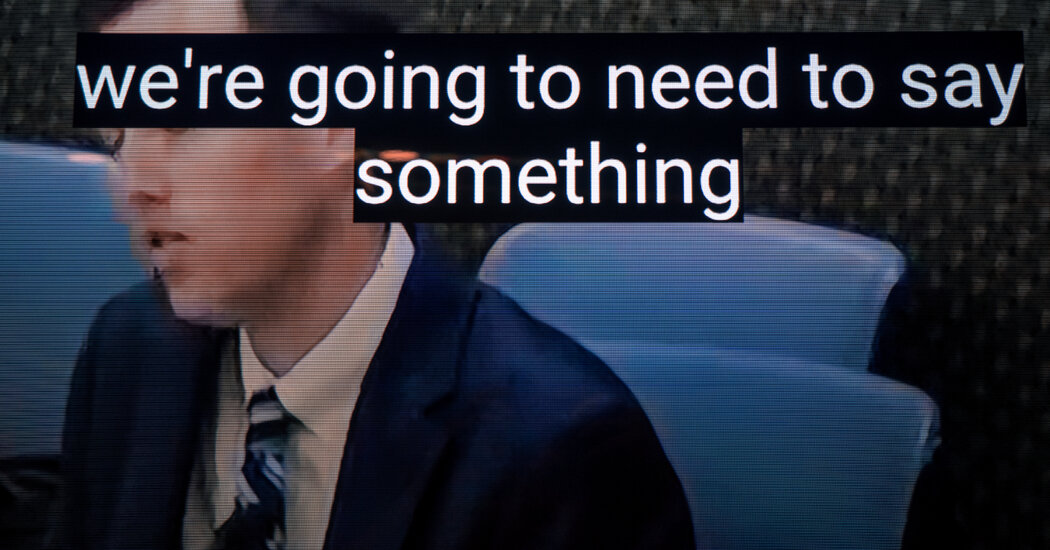 Opinion | The Myth of the Good Trump Official

By Matt Bai
Contributing columnist |
July 22, 2022 at 4:51 p.m. EDT
Matthew Pottinger, former deputy national security adviser, and Sarah Matthews, former deputy White House press secretary, testify at the Jan. 6 committee hearing on July 21. (Patrick Semansky/AP)
I don’t want to be uncharitable toward the witnesses who have come before the nation to testify about the events of Jan. 6, 2021. Many have shown genuine courage and patriotism.
I think of Cassidy Hutchinson, an idealistic 26-year-old aide who found herself caught between her conscience and the men who were supposed to be her mentors. It took strong character for Hutchinson to tell her story while the superiors she trusted dodged subpoenas.
Sign up for a weekly roundup of thought-provoking ideas and debates
But I felt far less moved Thursday night as I watched former White House aides Sarah Matthews and Matthew Pottinger, both well-traveled veterans of Republican wars, take their turns as John Dean wannabes. I don’t share Rep. Liz Cheney’s (R-Wyo.) view that Matthews and Pottinger should be long remembered for their “bravery and honor.”
What should we remember? That they realized, at the last possible moment, that they were enabling a president who cared nothing for his country and its values? That they suddenly found the spine and rectitude to storm out on jobs they were going to have for only a few more weeks anyway?
David Von Drehle: A Trump aide’s ‘media’ remark diagnoses our political cancer
What did that cost them, exactly? A couple days of orderly packing?
ADVERTISING
There were plenty of Republicans who declined to serve Donald Trump from the outset of his administration, even though they loved government service. There were others who sacrificed ascendant careers in government and lifelong friendships because they resolved to continue opposing him.

Follow Matt Bai's opinionsFollow
There were also a lot of serious Republicans — many of them in military uniforms — who felt it was their duty to serve the country and try to rein in Trump’s worst impulses. I thought they were wrong, but it was a reasonable choice to make.
And then there were people like Matthews, who eagerly worked for Trump’s reelection campaign, and who, according to her own testimony Thursday, traveled with him for years to the crazy, Mussolini-like rallies where he mixed conspiratorial fiction with insults.
It was interesting to hear Matthews say, almost as an aside, that she knew Trump had the power to stop the riot on Jan. 6 because she had seen firsthand how his followers hung on his every word and would do whatever he asked. The cynicism here is hard to stomach. She well understood that Trump was dangerously manipulating nativist masses for his own selfish ends — but, hey, it was all part of the game, right?
Advertisement
Yet here was Matthews at the hearing, rewriting her tarnished résumé in real time, talking about how appalled she was that Trump was “pushing the lie that there was a stolen election” on “one of the darkest days in American history.”
Like it wasn’t entirely foreseeable. Like she hadn’t helped Trump plant that lie over the course of many months, mindless of the consequences.
Matthews, Pottinger, Judd Deere, Eric Herschmann, Pat Cipollone, Kayleigh McEnany — none of them are really all that different from Josh Hawley, the senator shown fleeing the Capitol after having riled up the rioters with a raised fist. All of them enabled a president who stirred up the worst emotions in American life, who lit the fuse on a crude bomb and then recklessly hurled it into the heart of our democracy. It just took a little longer for things to play out.
And yet, because Matthews and Pottinger also high-tailed it home after the failed coup, the committee repeatedly teed them up for self-righteous preening with questions like: How do you feel, as a former Marine and White House official, about the peaceful transfer of power? (Pottinger, surprise, thinks it’s a good thing.)
Rep. Adam Kinzinger (R-Ill.) praised both witnesses for having “refused to be associated with President Trump’s dereliction of duty.” Cheney called Matthews “an inspiration to American women and to American girls.”
Oh, come on. Is that really what Cheney — who took a principled stand against Trump when it was clear she would pay for it with her promising career — is telling her three daughters now? That they should emulate this skilled abettor of lies who suddenly realized on Jan. 6 that maybe Trump wasn’t such a great president after all?
That’s certainly not what I’d tell my young daughter, if she weren’t so disgusted by the meanness and futility around our politics that she’d rather watch a test pattern on TV than sit through 10 minutes of these hearings, as important and dramatic as they are.
If we have Matthews and Pottinger to thank for airing the truth about Trump’s final days, then we have them to thank for that legacy, too.

You can read the comments from Rubio and Lindsey Graham before the 2016 Republican Primaries. Republicans all knew who this guy was.

Any of them could answer the simple question, if it’s between his own interests and the right thing, what will Trump do?
Reactions: nelly02 and cigaretteman
You must log in or register to reply here.

Off Topic Yesterday at 12:06 PM
CarolinaHawkeye

Off Topic Monday at 2:53 PM
cigaretteman