They were nice bees...

This is something you have to see to bee-lieve!

A Florida couple recently learned that they were in a sticky situation when a seven-foot-tall beehive holding an estimated 80,000 bees — and 100 lbs. of honey — was uncovered behind a shower wall in their home during a bathroom renovation project, according to the New York Times.

Stefanie and Dan Graham of St. Petersburg, Florida, said that they removed a beehive near their shower several years before this discovery and continued to spot the insects inside their home afterward.

"We both really love nature, and we love bees," Stefanie told the Times. "We're like, 'We'll leave you alone. You leave us alone.' They were nice bees. So we were like, 'Sure, go ahead, live in our shower.' "

So when the couple recently decided to update their bathroom, they called in a professional beekeeper, Elisha Bixler — who runs the bee-centered company, How's Your Day Honey — in case any of the insects were uncovered during the project. The Grahams were shocked to find that the bees they had spotted in their home belonged to a hive of thousands.

After arriving at the Graham home to take care of the bee situation, Bixler told the Times that she used a thermal detector gun to locate the hive, which "showed that the temperature was around 96 degrees." The measurement, the outlet noted, "was typical for a hive."

Breaking away at the walls within the bathroom, Bixler discovered how serious of a bee situation the Grahams had. "As soon as I saw where they were, I started breaking away the tile and unveiling this massive seven-foot hive," she said. "Most of it was honey."

Bixler sorted through the bees — a process which the Times noted took more than five hours and came at the cost of $800, which was not covered by insurance — and was able to find the queen bee, who she put in a protective cage and placed inside a box with the other bees.

"That makes all the bees go into the box with her," Bixler explained to the outlet. "She wants to be back in her wall. She thinks that's her home."

The Times reported that Bixler then used a "special vacuum" to remove the leftover bees from the hive before taking the insects to her farm. She will later relocate the bees to different apiaries in the area, where the insects won't be bothered by renovation projects. 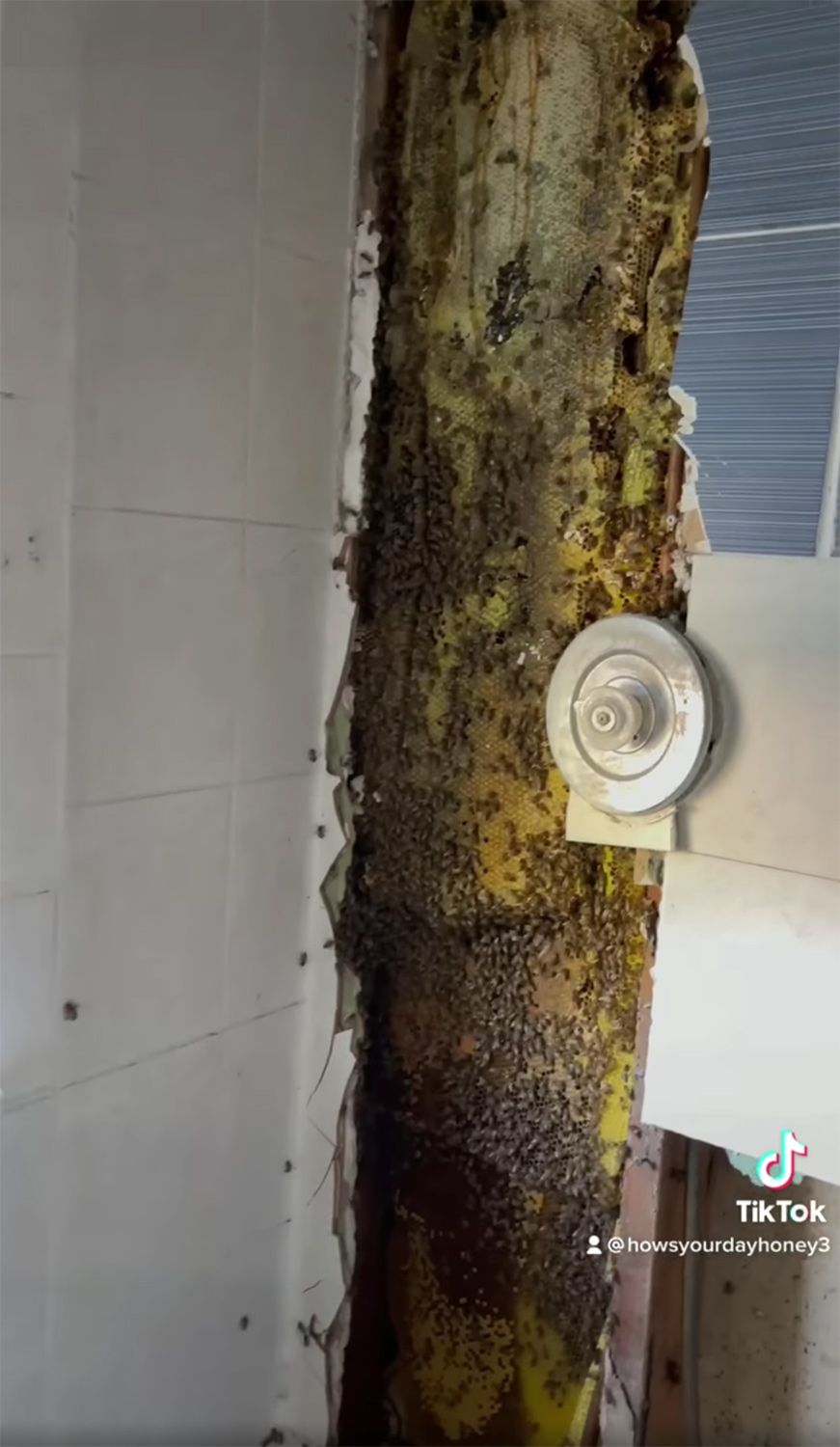 I wonder if the beekeeper also got the 100 pounds of honey?

a process which the Times noted took more than five hours

That's some epic dedication to a job like that. Sifting and sorting to find the needle in the haystack. No way I would have the patience to do it.

That's the first thing I thought of as well!

The Tradition said:
I wonder if the beekeeper also got the 100 pounds of honey?
Click to expand...

I would hope so. What is the average person going to do with 100 pounds of honey anyway? I don't know exactly but I think our family consumes no more than 5 pounds of honey in a year.

Obviously Oblivious said:
I would hope so. What is the average person going to do with 100 pounds of honey anyway? I don't know exactly but I think our family consumes no more than 5 pounds of honey in a year.
Click to expand...

The homeowners could jar it and sell it at the farmer's market to recoup their expenses.

Obviously Oblivious said:
I would hope so. What is the average person going to do with 100 pounds of honey anyway? I don't know exactly but I think our family consumes no more than 5 pounds of honey in a year.
Click to expand...

Unearthing Egypt's pyramids, modern archaeologists have found artifacts dating back thousands of years, including pots filled with honey that never spoiled.
…
"Honey will darken and/or crystallize, but it is still safe to eat," she said. Metal or plastic containers can oxidize the honey, and heat can change its flavor. So, for best results, store it away from any heat-producing electronics in your kitchen.
Even more important is sealing honey in an air-tight, glass container to prevent it from fermenting, Grad said. And be careful to use clean, dry utensils when scooping from the jar; moisture contamination will ruin honey.
Honey's low moisture content keeps bacteria from surviving. And without bacteria at work, honey just doesn't spoil. Plus, honey is acidic enough to ward off most of the bacteria and organisms that spoil other food.
What's more, the bees add their own enzymes to honey, and these enzymes produce hydrogen peroxide. Yes, that's the same antiseptic we use to treat wounds.
"Because honey is naturally antimicrobial, it has been used throughout history for almost every illness of mind and body," Grad said. "In the past, physicians in the battlefields would pack honey into the wounds of soldiers to prevent bacteria from growing." Even today, hospitals use medical-grade honey to treat strains of drug-resistant bacteria, she added.
Reactions: Obviously Oblivious

The Tradition said:
Bixler told the Times that she used a thermal detector gun to locate the hive, which "showed that the temperature was around 96 degrees." The measurement, the outlet noted, "was typical for a hive."
Click to expand...

Sounds to me like they're onto something. Bees are good for the environment, but also provide great insulation.
You must log in or register to reply here.

They survived the Dallas hair salon shooting. Here’s their message.

Wouldja.....WARNING, you will need to be able to live without your head.

‘How to Murder Your Husband’ Writer Convicted of Murdering Husband