Eight inches of rain fell in Iowa City from midmorning Friday, July 13, 1962, until 7 a.m. Saturday. No one died in the flash flooding, but a man was killed when his gas station, which had been surrounded by Ralston Creek floodwaters, exploded.


On Saturday evening, Daniel Mowry, 51, and his wife, Erna, were cleaning out their restaurant, Doug’s Diner, and the Home Oil Co. filling station they operated next door at 630 Iowa Ave.


The Mowrys had taken over the diner from Doug and Lola Fairbank in 1956 and began operating the service station in April 1962, just three months before the flash flood.

Daniel Mowry walked from the diner to the service station at about 7:40 p.m. An explosion rocked the building, destroying the garage and damaging the dinner.


Mowry was found lying by the door between the service station and the diner. He was extricated from the rubble and taken to an Iowa City hospital with a skull fracture, broken ribs and second- and third- degree burns over 95 percent of his body. He died Sunday.


A man who witnessed the blast said he saw the roof lift from the garage and cinder blocks fly in all directions.


Authorities cordoned off a one-block area around the station and checked homes for gas leaks. They evacuated two homes, including one on Iowa Avenue just west of the station belonging to Clark “Doc” and Betty Mighell, who’d once owned and operated the diner and gas station.


A week after the explosion, Iowa City Fire Chief Vernal Shimon said floodwaters had covered the gas tanks at the station. Fumes accumulated and somehow ignited. Arson was not suspected, he said.


A year later, in July 1967, Erna Mowry filed a $125,000 lawsuit against Clark and Bernice Mighell, owners of the property where her husband was killed.

Also named in the lawsuit were Capitol Oil Co., Iowa-Illinois Gas and Electric, which had a natural gas line at the station, and American Oil Co., which supplied white naphtha gas to the station.


Erna Mowry stated in the lawsuit that the naphtha gas had washed out of the underground tanks after the flood. Her husband, she said, had called the natural gas and gasoline companies to check for leaks. After inspectors checked the properties, they said there was no danger, the lawsuit stated.


A bit of history on the Mighells, who were named in the lawsuit.


Clark “Doc” Mighell graduated from Iowa City High and went to Valparaiso University in Indiana, where he met and married Bernice “Betty” Merkerson.


The two moved to Cedar Rapids in June 1920 and then moved to Ottumwa, where Mighell worked for his family’s oil service company.


In 1930, they moved to Iowa City, where Mighell built a full-service gas station, the Home Oil Co., at the corner of Iowa Avenue and North Dodge Street.


In 1943, the Mighells opened the 2 Mile Inn diner (later renamed Doug’s Diner) next to their service station. In 1947, Mighell was elected an alderman in Iowa City.


One of the concerns he brought up to the council was the need for “flood control on Ralston Creek,” less than a half-block south of his businesses.


During the July 13-14, 1962, flash flood, Ralston Creek surged out of its banks, reaching heights of 3 to 4 feet along its path through eastern Iowa City.


The U.S. Geological Survey later reported the water flow in the creek had reached its highest level since record keeping began in 1924.


The flash flooding “took a heavy toll on the University of Iowa Art and Theater buildings,” The Gazette reported. “The basements of both were flooded to a depth of 3 to 4 feet after rainwater spilled into a heating tunnel connecting the two buildings.”


The basement of the new city hall was inundated, water poured into warehouses, and approaches to bridges on Maiden Lane and Lafayette Street were washed out, while other streets were covered with water. 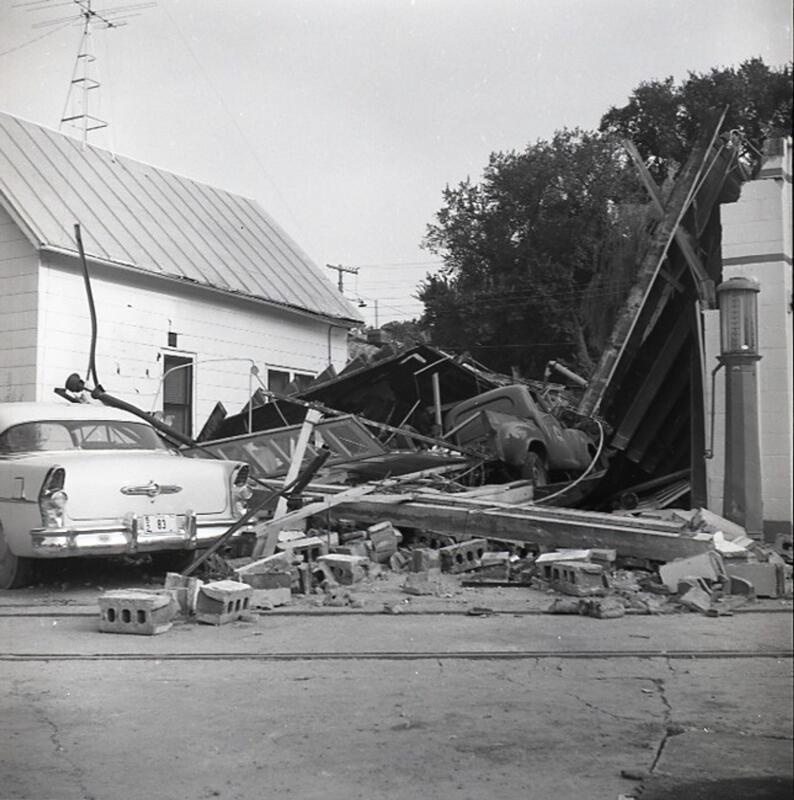 Station had been surrounded by Ralston Creek flash flood

So, is that where Lou Henri’s and the Maid Rite, and several other restaurants have been located?

lucas80 said:
So, is that where Lou Henri’s and the Maid Rite, and several other restaurants have been located?
Click to expand...

It might be. I was trying to figure out where it was. Having checked the interwebs, it appears that is where it was: https://www.google.com/search?client=firefox-b-1-e&q=630+iowa+ave+iowa+city

cigaretteman said:
It might be. I was trying to figure out where it was. Having checked the interwebs, it appears that is where it was: https://www.google.com/search?client=firefox-b-1-e&q=630+iowa+ave+iowa+city
Click to expand...

I believe that's correct, I recall a gas station being there when I was kid in the early 80's

QChawks said:
I believe that's correct, I recall a gas station being there when I was kid in the early 80's
Click to expand...

I first moved to Iowa City in 1974 (I'm on my third stint in IC), and I don't recall a gas station being there then. I believe it was a Maid-Rite at that time.
You must log in or register to reply here.

Anyone ever try this "gas station heroin"?