Trump’s Guys Have Their Work Cut Out for Them

By Gail Collins
Opinion Columnist
Sign up for the Opinion Today newsletter Get expert analysis of the news and a guide to the big ideas shaping the world every weekday morning. Get it sent to your inbox.
If Democrats do better than expected in next week’s elections, let’s hope they send a thank-you card to Donald Trump.
Just because it’d drive him crazy. But his meddling is also a real factor: If you look at some of the most competitive races, the awfulness of the Republican nominee is thanks in good part to Trumpian support.
“My record is unparalleled, my endorsements, it’s totally unparalleled,” he bragged earlier this year. It certainly was extensive — he reportedly made about 200 primary endorsements. But there weren’t a ton of heavy lifts. His choices were mainly incumbents and others who were virtually unopposed.
“It’s like the Celtics winning a game against the Little Sisters of the Poor,” said a friend of mine.
Advertisement
Continue reading the main story


Still, when there was a serious race, Trump had a major-league talent for picking the least attractive possibility.
Take Georgia. Democratic Senator Raphael Warnock should probably be in deep, deep trouble given the general political climate. But the polls show a near-even race. Warnock sure is lucky that Trump made such a heroic effort to promote Herschel Walker, who was terrible even before he plunged into his serial abortion scandals.
And then there’s J.D. Vance, who Trump is backing in the Ohio Senate race. The former president showed up for a Vance rally last month in Youngstown, standing right next to the contender, who, he told the crowd, “is kissing my ass, he wants my support so much.”

A comment that has been quoted a time or 20 by Vance’s opponent, Tim Ryan.
To be fair — if you really feel like being fair — Trump’s favorites generally did win. ( “Nobody’s ever had a record like this. I’m almost unblemished.”)
Of course, it’s natural that voters in Republican primaries would care about the opinion of the last Republican president. Trump’s endorsement certainly made a difference in Arizona — where the deeply unappealing Blake Masters won the Senate nomination with his help.

And his backing was also very important in Pennsylvania, where Republicans are now stuck in the governor’s race with Doug Mastriano, a state senator who’s argued that women who have abortions relatively early in a pregnancy should be charged with murder.
The general elections are a different kind of competition, where the Trump name can be a little less, um, attractive. Wisconsin observers couldn’t help noticing that once Tim Michels had won the Republican nomination for governor, his campaign website scrubbed all references to “Endorsed by President Trump,” only to put them back up an hour later. Such is the life of the Trump acolyte.
In New York, the Democratic candidate for governor, Kathy Hochul, cannot remind voters enough that her opponent, Lee Zeldin, has Trump’s backing. Zeldin, who was happy to have Trump appear at a September fund-raiser, now likes to focus on crime, and you will probably not hear the 45th president’s name in his ads unless Trump gets mugged on Park Avenue.
Even when he’s not promoting anybody, Trump is … keeping in touch. It’s hard to avoid his emails, the vast, vast majority of which are asking for money. My absolute favorite, which arrived last month, announced he “just couldn’t wait any longer to tell you this EXCITING NEWS.”
Which was — wait for it:
“I HAVE BEEN NAMED THE #1 PRESIDENTIAL GOLFER IN HISTORY!”
The namer was a conservative website called the DC Enquirer. We will not mention the very different opinion of experts like the sportswriter Rick Reilly, who wrote about Trump’s game in his book “Commander in Cheat.”
But our former president was sharing this exciting news to remind us that “we still have a few boxes left of our LIMITED EDITION Trump Golf Balls.” A collector’s item!
You can get any of this stuff by clicking a box and making a contribution — pick any amount you want, although that vibrant blue $250 box is doing a special happy dance. All the money goes to Trump’s own personal election fund-raising operation, which cynics might just refer to as Donald’s Piggy Bank. From which he’s forked out more than $13 million for TV ads over the last month to help out his fellow Republicans.
Advertisement
Continue reading the main story


That may sound nice, but put in another context, it amounts to about 15 percent of what he had on hand. And about one-fifth of the $71 million Republicans are getting from the Senate Leadership Fund, Mitch McConnell’s super PAC. McConnell, by Trump’s calculation, is a “Broken Old Crow.” So, of course, nothing Mitch does counts.
I guarantee the emails will keep on coming. What else can Trump do? He’s still banned from Twitter and his attempt at a substitute, Truth Social, probably has fewer followers than some minor celebrities. Although definitely more than a semi-popular college sophomore.
Well, hey, D.J.T. does need some diversion. His business organization is wrestling with multitudinous court cases in New York right now — tax fraud is a central topic.
He’s been on the road a lot, making speeches, raising money and being protected by Secret Service agents who the Trump Organization has charged up to $1,185 per night for hotel rooms. Yeah, he’s so grateful for security over the past few years he’s billed us more than $1.4 million.
Let’s see what happens next. If his pitiful candidates don’t survive, maybe some Republicans will ask for their money back. 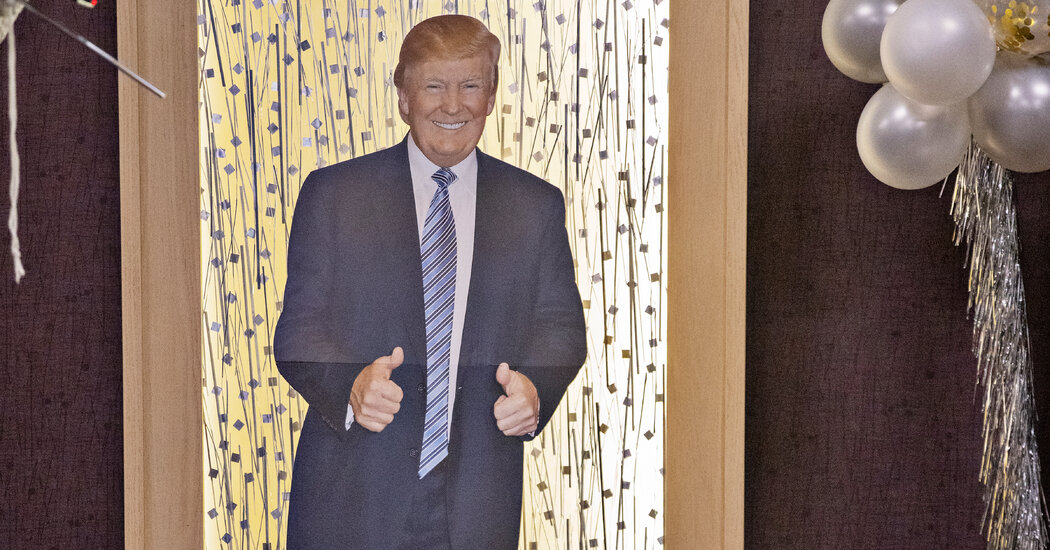 Opinion | Trump’s Guys Have Their Work Cut Out for Them

And now a word from their sponsor …

Looks like South Carolina is now the early campaigning place to be!

She said it was very sexy to be raped.

Trump’s GOP foes are scared. But not as much as they should be.