A federal grand jury in Washington is examining the formation of — and spending by — a super PAC created by Donald J. Trump after his loss in the 2020 election as he was raising millions of dollars by baselessly asserting that the results had been marred by widespread voting fraud.
According to subpoenas issued by the grand jury, the contents of which were described to The New York Times, the Justice Department is interested in the inner workings of Save America PAC, Mr. Trump’s main fund-raising vehicle after the election. Several similar subpoenas were sent on Wednesday to junior and midlevel aides who worked in the White House and for Mr. Trump’s presidential campaign.
The new focus on Save America was reported earlier by ABC News.
Among the roughly half-dozen current and former Trump aides in the White House and the 2020 presidential campaign who are said to have received subpoenas this week were Beau Harrison, an aide to Mr. Trump in the White House and in his post-presidency, and William S. Russell, who similarly worked in the West Wing and now for Mr. Trump’s personal office, according to several people familiar with the events.


The fact that federal prosecutors are seeking information about Save America PAC is a significant new turn in an already sprawling investigation of the roles that Mr. Trump and some of his allies played in trying to overturn the election, an array of efforts that culminated with the violent mob attack on the Capitol on Jan. 6, 2021.

Those parts of the Jan. 6 inquiry related to Mr. Trump have so far largely centered on a plan to create slates of electors pledged to him in seven key swing states that Joseph R. Biden Jr. had won.
The new subpoenas appeared to have been issued by a different grand jury in Washington than the one that has been gathering evidence about the so-called fake electors plan, which has focused on questions surrounding pro-Trump lawyers like Rudolph W. Giuliani and John Eastman.
At least one of the new subpoenas bore the name of a veteran federal prosecutor in Washington who specializes in fraud cases, suggesting that this avenue of inquiry is devoted primarily to examining the spending and fund-raising at Mr. Trump’s super PAC.

At a hearing held in June by the House select committee investigating Jan. 6, Representative Zoe Lofgren, Democrat of California, laid out the panel’s account of how Save America PAC and Mr. Trump’s campaign raised $250 million after the election by claiming they were fighting widespread fraud when they knew there was none.
Advertisement
Continue reading the main story


“Throughout the committee’s investigation, we found evidence that the Trump campaign and its surrogates misled donors as to where their funds would go and what they would be used for. So not only was there the big lie, there was the big rip-off,” Ms. Lofgren said. “Donors deserve to know where their funds are really going. They deserve better than what President Trump and his team did.”
The revelation that Save America PAC had fallen under scrutiny comes as Mr. Trump is at the center of a remarkable swirl of investigations at the state and federal levels, reaching from Georgia to New York to Florida.
This week, a federal judge in Florida ordered the appointment of an independent arbiter, known as a special master, to review a trove of more than 11,000 documents seized last month from Mr. Trump’s private club and residence. The search of the estate, Mar-a-Lago, was part of a Justice Department inquiry into whether Mr. Trump illegally retained national defense papers at the property and obstructed repeated attempts by government officials to retrieve them. 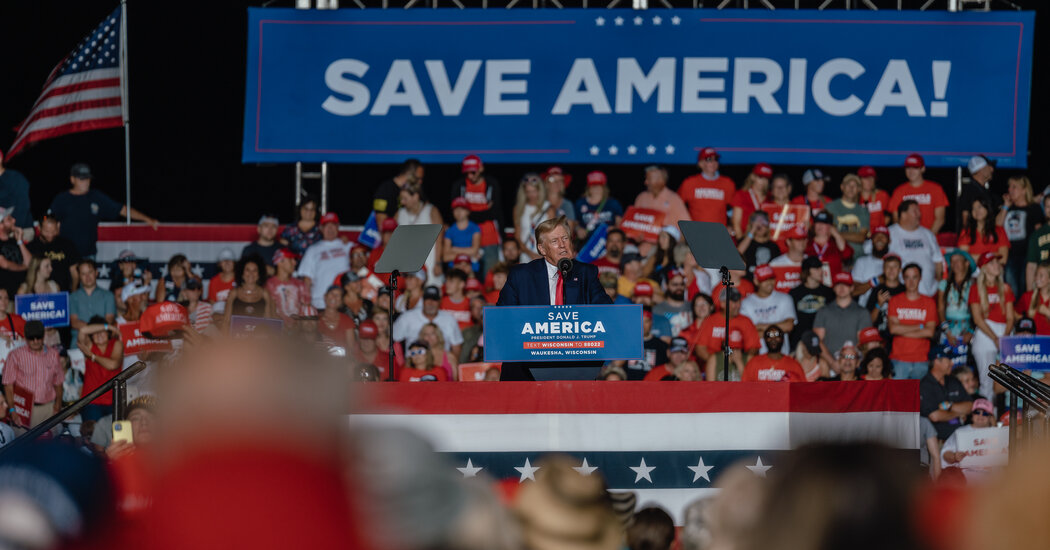 A federal grand jury has issued subpoenas seeking information about Save America PAC, which was formed as Donald J. Trump promoted baseless assertions about election fraud.

I think the people who sent him their money should be put away in mental institutions first. Amazing how people will send money to millionaires by just getting asked for it by them.

FAUlty Gator said:
I think the people who sent him their money should be put away in mental institutions first. Amazing how people will send money to millionaires by just getting asked for it by them.
Click to expand...

Yeah, it's truly bizarre!
You must log in or register to reply here.