Lawyers for former President Donald J. Trump asked a federal judge on Monday to deny the Justice Department’s request to immediately restart a key of part of its criminal investigation into his hoarding of sensitive government documents at his residence in Florida.
Renewing their request for an expansive independent review of records seized from Mr. Trump, the former president’s legal team argued that seized records marked as classified should remain off limits to the F.B.I. and prosecutors. They asked the judge, Aileen M. Cannon, to maintain her order barring agents from using any of the materials taken from his estate, Mar-a-Lago, until a so-called special master has vetted all of them.
The 21-page filing was an aggressive rebuke of the Justice Department’s broader inquiry into whether Mr. Trump or his aides illegally kept national security secrets at the property or obstructed the government’s repeated attempts to retrieve the materials. It played down the criminal inquiry as a “storage dispute” and insinuated that officials may have leaked information about the contents of the files.
Advertisement
Continue reading the main story


“This investigation of the 45th president of the United States is both unprecedented and misguided,” the filing said. “In what at its core is a document storage dispute that has spiraled out of control, the government wrongfully seeks to criminalize the possession by the 45th president of his own presidential and personal records.”
TRUMP LEGAL TEAM FILING
Read the response to prosecutors’ proposal to exempt classified records from a special master review.
The filing on Monday was the latest salvo in what threatens to become a protracted court fight over a special master and the sorts of powers that person should have in filtering the trove of seized documents. Another dispute is whether the special master’s review should extend to blocking investigators from using any records potentially protected by executive privilege.
The new filing, which came as Mr. Trump returned to the Washington area, underscored how he has succeeded for now in using what amounts to a procedural sideshow to stall the criminal investigation, even after his representatives falsely said in June that his office had returned any documents marked as classified in his possession.
Prosecutors had asked Judge Cannon last week to let investigators resume working with about 100 documents marked as classified that formed a small portion of the nearly 13,000 items the F.B.I. seized during a court-authorized search of Mar-a-Lago on Aug. 8.

They said the prohibition on using those materials was hindering the intelligence community’s review of the potential harm caused by the insecure storage of national security secrets and a classification review of the materials, arguing those efforts were inextricably intertwined with the criminal investigation.
Advertisement
Continue reading the main story


But on Monday, Mr. Trump’s lawyers dismissed the government’s claims, saying that those assertions appeared to be “exaggerated” and that only a “brief pause” would be required for the special master’s review to be completed. (Mr. Trump’s lawyers said on Friday that they expected the review to take three months.)
“This convenient, and belated, claim by the government relative to enjoining the criminal team’s access to these documents only arises because the F.B.I. concedes the intelligence community review is actually just another facet of its criminal investigation,” they argued.
Still, the dispute over the special master has already delayed a briefing on the seized materials to top leaders in Congress and leaders of congressional intelligence committees, a person familiar with the matter said.
The clash traces back to an order issued early last week by Judge Cannon, a Trump appointee, in which she said she would appoint a special master with broad authority to review all the seized materials. In her order, Judge Cannon said they could be scrutinized not only for any potentially covered by attorney-client privilege, a relatively common measure, but also for executive privilege, which would be unprecedented in a federal criminal inquiry.
As part of her order, Judge Cannon told the Justice Department that it would have to wait until the special master’s work was done to use any of the records in its investigation. But the judge conceded that the intelligence community could use the materials in a separate assessment of how the former president’s hoarding of the records might have affected national security.
On Thursday, the Justice Department shot back, telling Judge Cannon in yet another filing that the intelligence assessment and the criminal inquiry were “inextricably linked.” Prosecutors asked her to lift her ban on using the seized materials and requested she restrict the scope of the special master’s review to unclassified documents, excluding about 100 seized files bearing classification labels.

Moreover, prosecutors informed her that if she did not grant by Thursday their request to stay the portion of her ruling that is keeping investigators from working with the documents marked as classified, they would ask the Court of Appeals for the 11th Circuit, in Atlanta, to intervene and block it.
Advertisement
Continue reading the main story 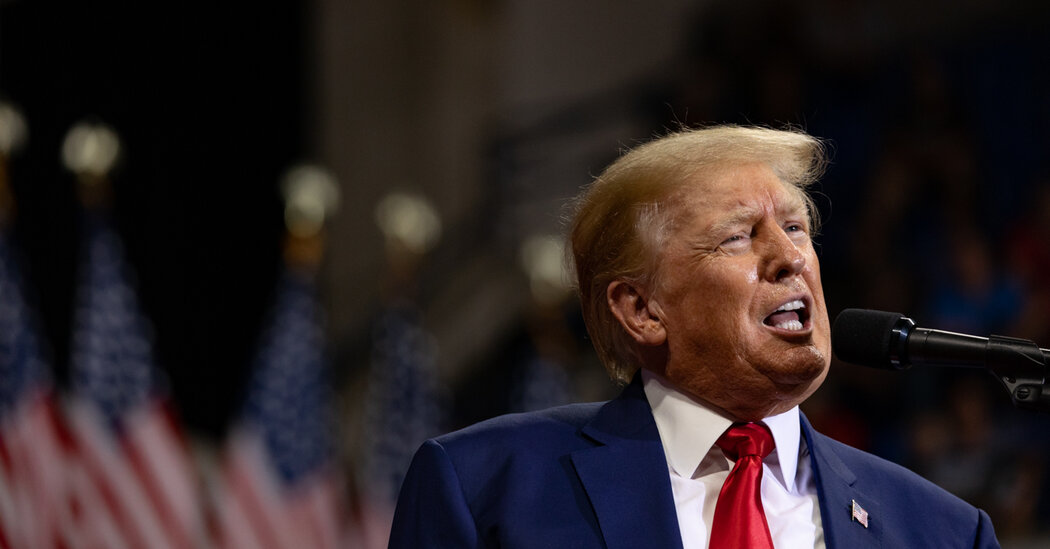 It was the latest salvo in a court fight over a special master, which has stalled an investigation into the former president’s hoarding of government documents.