Former president Donald Trump’s company charged the Secret Service as much as five times more than the government rate for agents to stay overnight at Trump hotels while protecting him and his family, according to expense records newly obtained by Congress.

The records show that in 40 cases the Trump Organization billed the Secret Service far higher amounts than the approved government rate — in one case charging agents $1,185 a night to stay at the Trump International Hotel in D.C. The new billing documents, according to a congressional committee’s review, show that U.S. taxpayers paid the president’s company at least $1.4 million for Secret Service agents’ stays at Trump properties for his and his family’s protection.

“The exorbitant rates charged to the Secret Service and agents’ frequent stays at Trump-owned properties raise significant concerns about the former President’s self-dealing and may have resulted in a taxpayer-funded windfall for former President Trump’s struggling businesses,” Rep. Carolyn B. Maloney (D-N.Y.) wrote to Secret Service Director Kimberly Cheatle.

The records contradict the repeated claim made by Eric Trump, the president’s son and the Trump Organization’s executive vice president, that the family’s company often gave the Secret Service agents the hotel rooms “at cost” or sometimes free, providing steep discounts for the security team to stay at Trump properties.
Neither the Secret Service nor the Trump Organization immediately responded to messages from The Washington Post about the new congressional report.
While the documents do not cover all Secret Service expenses at Trump properties during his presidency and reflect only a fraction of those expenses since he left office, they offers a more detailed financial accounting than previously known of what taxpayers paid for Trump’s frequent choice to stay at his properties. Trump visited his properties more than 500 times during his presidency.

Maloney, chairwoman of the House Oversight and Reform Committee, obtained the records as part of her investigation into how Trump may have profited off his security agents’ duty to follow him wherever he traveled. She wrote a letter Monday to Cheatle demanding a complete accounting of what taxpayers have paid — and continue to pay — the Trump Organization.
“Given the long-standing concerns surrounding the former President’s conflicts of interest and efforts to profit off the presidency, the committee has a strong interest in obtaining a complete accounting of federal government spending at Trump properties,” Maloney wrote. “The Committee continues to examine potential legislation to prevent presidential self-dealing and profiteering, as well as to curb conflicts of interest by ensuring that future presidents are prevented from exercising undue influence on Secret Service spending. ”
In 2019, Eric Trump said the Trump Organization was saving the Secret Service agents — and taxpayers who paid the bill — huge sums.

“If my father travels, they stay at our properties free,” he said. “So everywhere that he goes, if he stays at one of his places, the government actually spends, meaning it saves a fortune because if they were to go to a hotel across the street, they’d be charging them $500 a night, whereas, you know we charge them, like $50.”
In 2020, Eric Trump reiterated that Trump Organization was giving these public servants — and ultimately taxpayers — discounted rates.
“We provide the rooms at cost and could make far more money renting them to members or guests,” he said.
But the reality was different, the records reveal. During Trump’s presidency, Secret Service supervisors frequently asked for special waivers to let the agency pay far more than the government-approved nightly rate for a hotel in D.C. — usually $195 to $240. Instead, they paid the higher costs the Trump Organization was charging.

In April 2017, when Eric Trump and his wife, Lara, were staying at the Trump International Hotel in D.C., the president’s company charged the Secret Service agents $1,160 — more than four times the government rate at the time — the records show.
In November 2017, when Donald Trump, Jr., stayed at the same hotel, the government was charged $1,185 a night for his security detail staying overnight at the hotel to protect him — almost six times the government rate, which varies based on time and location.
Maloney stressed that the Secret Service continues to pay the Trump Organization while protecting Trump since he left office, and she is concerned by reports of excessive fees the agency is charged for the former president’s travels. Her committee obtained records that stretch over his four-year presidency and continue from President Biden’s inauguration to September 2021.
Maloney noted in her letter to the Secret Service director that records turned over to her committee do not include the agency’s payments for a series of visits to Trump’s private club at Mar-a-Lago; some visits to his property at Bedminster, N.J.; and for stays at Trump properties outside the United States during frequent foreign travel by Trump and his family.

I’m shocked that there’s gambling going on in this establishment … “Louie to Rick in Casablanca “
Reactions: TheCainer and cigaretteman

Least surprising news ever
Reactions: Wendy79, 3boysmom, mthawkeyes and 6 others

I was thinking the same thing

Because first and foremost, since he was old enough to talk, tRump has been a grifter and con man. Everyone with any knowledge of him in the years before he became Pres was aware of that. So he did not change when he became Pres, or now. It's just that about 33 % of the population are too ignorant to know, understand the obvious. Or some want to ride his coattails as much as they can (see: Grassley) his and their character be damned. He is just proving every day how much this is true,
Reactions: TheCainer, funksouljon, MitchLL and 3 others

cigaretteman said:
Former president Donald Trump’s company charged the Secret Service as much as five times more than the government rate for agents to stay overnight at Trump hotels
Click to expand...

And, lied about it.
Reactions: TheCainer, 3boysmom, fsu1jreed and 2 others 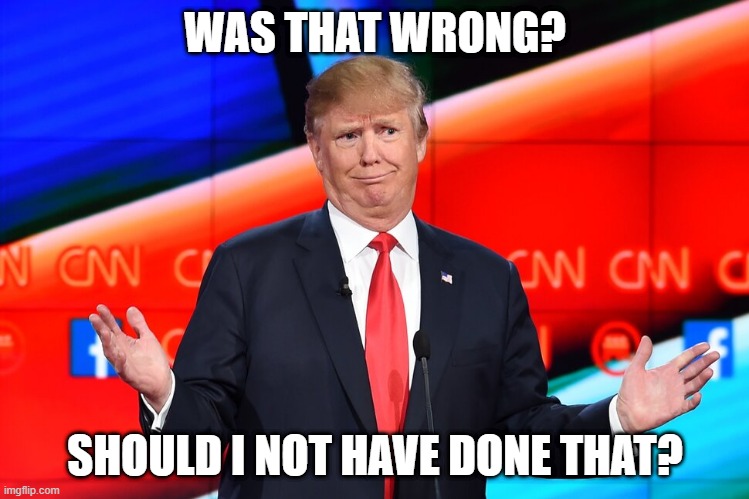 I’m sure there will be major repercussions for this offense.

When eric said they let the SS have the rooms "at cost" he meant the cost to have built them
Reactions: sabula, cigaretteman, TheCainer and 1 other person

Fiscally responsible conservatives are going to hear about this and abandon Trump any minute now.
Reactions: pink shizzle, cigaretteman and TheCainer

For real. Guess now that he isn't there to have his agents run blocker for investigations, all the things that we were told "well, no one is investigating, so it can't be true. Its just your TDS." excuses are proving to be unfounded denials based on the swamp expanding, not draining.

aka the fox guarding the hen house.

Pretty sure this was repeatedly called out 2018-2020.
Reactions: cigaretteman
P

funksouljon said:
For real. Guess now that he isn't there to have his agents run blocker for investigations, all the things that we were told "well, no one is investigating, so it can't be true. Its just your TDS." excuses are proving to be unfounded denials based on the swamp expanding, not draining.

aka the fox guarding the hen house.

It was called out right away when it was clear Trump wasn't going to actually divest himself from his interests.
Reactions: Pinehawk and funksouljon
You must log in or register to reply here.

What is the problem with New Jersey?

The Trump and Biden classified-document revelations are not the same