In December 1972, the critic Pauline Kael famously admitted that she’d been living in a political bubble. “I only know one person who voted for Nixon,” she said. “Where they are, I don’t know. They’re outside my ken.” A pithier version of her quote (“I can’t believe Nixon won. I don’t know anyone who voted for him.”) has been used to exemplify liberal insularity ever since, both by conservative pundits and by the kind of centrist journalists who have spent the past several years buzzing in the ears of heartland diner patrons, looking for clues about Donald Trump’s rise.
The most important fact about the Trump era, though, can be gleaned simply by examining his vote tallies and approval ratings: At no point in his political career — not a single day — has Mr. Trump enjoyed the support of the majority of the country he governed for four years. And whatever else Jan. 6 might have been, it should be understood first and foremost as an expression of disbelief in — or at least a rejection of — that reality. Rather than accepting, in defeat, that much more of their country lay outside their ken than they’d known, his supporters proclaimed themselves victors and threw a deadly and historic tantrum.
The riot was an attack on our institutions, and of course, inflammatory conservative rhetoric and social media bear some of the blame. But our institutions also helped produce that violent outburst by building a sense of entitlement to power within America’s conservative minority.
The structural advantages that conservatives enjoy in our electoral system are well known. Twice already this young century, the Republican Party has won the Electoral College and thus the presidency while losing the popular vote. Republicans in the Senate haven’t represented a majority of Americans since the 1990s, yet they’ve controlled the chamber for roughly half of the past 20 years. In 2012 the party kept control of the House even though Democrats won more votes.
Advertisement
Continue reading the main story


And as is now painfully clear to Democratic voters, their party faces significant barriers to success in Washington even when it manages to secure full control of government: The supermajority requirement imposed by the Senate filibuster can stall even wildly popular legislation, and Republicans have stacked the judiciary so successfully that the Supreme Court seems poised to overturn Roe v. Wade, an outcome that around 60 percent of the American people oppose, according to several recent polls. Obviously, none of the structural features of our federal system were designed with contemporary politics and the Republican Party in mind. But they are clearly giving a set of Americans who have taken strongly to conservative ideology — rural voters in sparsely populated states in the middle of the country — more power than the rest of the electorate.


With these structural advantages in place, it’s not especially difficult to see how the right came to view dramatic political losses, when they do occur, as suspect. If the basic mechanics of the federal system were as fair and balanced as we’re taught they are, the extent and duration of conservative power would reflect the legitimate preferences of most Americans. Democratic victories, by contrast, now seem to the right like underhanded usurpations of the will of the majority — in President Biden’s case, by fraud and foreign voters, and in Barack Obama’s, by a candidate who was himself a foreign imposition on the true American people.
But the federal system is neither fair nor balanced. Rather than democratic give and take between two parties that share the burden of winning over the other side, we have one favored party and another whose effortful victories against ever-lengthening odds are conspiratorially framed as the skulduggery of schemers who can win only through fraud and covert plans to import a new electorate. It doesn’t help that Republican advantages partly insulate the party from public reproach; demagogy is more likely to spread among politicians if there are few electoral consequences. This is a recipe for political violence. Jan. 6 wasn’t the first or the deadliest attack to stem from the idea that Democrats are working to force their will on a nonexistent conservative political and cultural majority. We have no reason to expect it will be the last.
And while much of the language Republican politicians and commentators use to incite their base seems outwardly extreme, it’s important to remember that what was done on Jan. 6 was done in the name of the Constitution, as most Republican voters now understand it — an eternal compact that keeps power in their rightful hands. Tellingly, during his Jan. 6 rally, Mr. Trump cannily deployed some of the language Democrats have used to decry voting restrictions and foreign interference. “Now it is up to Congress to confront this egregious assault on our democracy,” he said. “I know that everyone here will soon be marching over to the Capitol building to peacefully and patriotically make your voices heard. Today we will see whether Republicans stand strong for the integrity of our elections.”
The mainstream press has also had a hand in inflating the right’s sense of itself. Habits like the misrepresentation of Republican voters and operatives as swing voters plucked off the street and the constant, reductive blather about political homogeneity on the coasts — despite the fact that there were more Trump voters in New York City in 2016 and 2020 than there were in both Dakotas combined — create distorted impressions of our political landscape. The tendency of journalists to measure the wisdom of policies and rhetoric based on their distance from the preferences of conservative voters only reinforces the idea that it’s fair for politicians, activists and voters on the left to take the reddest parts of the country into account without the right taking a reciprocal interest in what most Americans want.

That premise still dominates and constrains strategic thinking within the Democratic Party. A year after the Capitol attack and all the rent garments and tears about the right’s radicalism and the democratic process, the party has failed to deliver promised political reforms, thanks to opposition from pivotal members of its own Senate caucus — Democrats who argue that significantly changing our system would alienate Republicans.
Given demographic trends, power in Washington will likely continue accruing to Republicans even if the right doesn’t undertake further efforts to subvert our elections. And to fix the structural biases at work, Democrats would have to either attempt the impossible task of securing broad, bipartisan support for major new amendments to the Constitution — which, it should be said, essentially bars changes to the Senate’s basic design — or pass a set of system-rebalancing workarounds, such as admitting new states ⁠like the District of Columbia. It should never be forgotten that fully enfranchised voters from around the country gathered to stage a riot over their supposedly threatened political rights last January in a city of 700,000 people who don’t have a full vote in Congress.
Jan. 6 demonstrated that the choice the country now faces isn’t one between disruptive changes to our political system and a peaceable status quo. To believe otherwise is to indulge the other big lie that drew violence to the Capitol in the first place. The notion that the 18th-century American constitutional order is suited to governance in the 21st is as preposterous and dangerous as anything Mr. Trump has ever uttered. It was the supposedly stabilizing features of our vaunted system that made him president to begin with and incubated the extremism that turned his departure into a crisis. 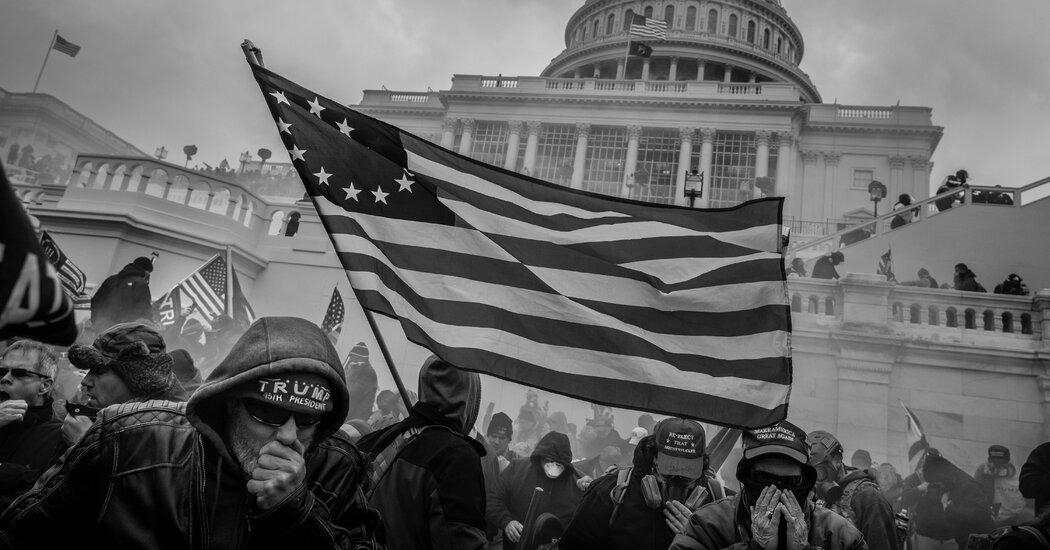 Our institutions, from the Electoral College to the media, have convinced conservatives that they are denizens of the real America.

Trump actually is the only person to blame for the riot. He should have been arrested for inciting a riot.
You must log in or register to reply here.

How bad a candidate was Kari Lake? This bad.

Off Topic Monday at 9:22 PM
Gimmered

Opinion Mike Pence sits alone in a corner of sadness

Off Topic Wednesday at 11:36 AM
BGHAWK
B