UI Law Professor: Democrats Have Been Shameless About Your Presidential Vote Too

By Derek T. Muller
Mr. Muller is a law professor at the University of Iowa who specializes in election law.
As Republicans in Congress prepare to formally contest the outcome of the 2020 presidential election on Wednesday, many of them have cited precedent for their effort: similar complaints lodged by Democrats in other presidential elections. After Republican victories in 2000, 2004 and 2016, for instance, Democrats in Congress used the formal counting of electoral votes as an opportunity to challenge election results.
But the history of Democratic efforts to contest the outcomes of presidential elections is not a history worth emulating. On the contrary, it only underscores that the certification of a president-elect’s victory by the House and Senate is an improper forum for the airing of political grievances and an inappropriate occasion to readjudicate the decisions of the states concerning things like vote tallies, recounts and audits.
While Congress has the power to decline to count electoral votes, it has done so only in extreme situations in the aftermath of the Civil War — when, for instance, a state was deemed to lack a functioning government. The Electoral Count Act of 1887, which sets the rules for Congress to count electoral votes, was enacted with the presumption that state procedures are trustworthy. The act instructs Congress to defer to state judgments when a state resolves controversies over the appointment of electors.
The act also requires broad political consensus to decline to count electoral votes. It instructs that on Jan. 6 after a presidential election, the president of the Senate (typically the vice president) presides over a session of the two chambers. If a member of Congress wishes to object to counting a state’s electoral votes, a member of the House and a member of the Senate must sign a written objection. The chambers separate for up to two hours of debate. If majorities of both chambers agree to the objection, the objection stands. If not, the votes are counted.
Advertisement
Continue reading the main story


Few objections were filed in accordance with the Electoral Count Act in the 20th century. But starting with George W. Bush’s victory in the 2000 presidential election, Democrats contested election results after every Republican win.
In January 2001, Representative Alcee Hastings of Florida objected to counting his state’s electoral votes because of “overwhelming evidence of official misconduct, deliberate fraud, and an attempt to suppress voter turnout.” Representative Sheila Jackson Lee of Texas referred to the “millions of Americans who have been disenfranchised by Florida’s inaccurate vote count.” Representative Maxine Waters of California characterized Florida’s electoral votes as “fraudulent.”

On Politics with Lisa Lerer: A guiding hand through the political news cycle, telling you what you really need to know.
Vice President Al Gore presided over the meeting in 2001. He overruled these objections because no senator joined them. Part of the reason they didn’t join, presumably, was that Mr. Gore conceded the election a month earlier.
In January 2005, in the wake of Mr. Bush’s re-election, Democrats were more aggressive. Senator Barbara Boxer of California joined Representative Stephanie Tubbs Jones of Ohio to lodge a formal objection to Ohio’s electoral votes. The objection compelled Congress to spend two hours in debate, even though Mr. Bush won Ohio by more than 118,000 votes.
Representative Barbara Lee of California claimed that “the Democratic process was thwarted.” Representative Jerrold Nadler of New York said that the right to vote was “stolen.” Ms. Waters objected too, dedicating her objection to the documentary filmmaker Michael Moore, whose 2004 movie “Fahrenheit 9/11” painted a dark (and at times factually debatable) picture of the Bush presidency.
Advertisement
Continue reading the main story


The motion failed, but not before 31 members of the House, and Ms. Boxer in the Senate, voted to reject Ohio’s electoral votes — effectively voting to disenfranchise the people of Ohio in the Electoral College.
In January 2017, after Donald Trump’s victory, Democrats in Congress once again challenged the election outcome. Representative Jim McGovern of Massachusetts cited “the confirmed and illegal activities engaged by the government of Russia.” Ms. Lee of California argued that Michigan’s electoral votes should be thrown out because “people are horrified by the overwhelming evidence of Russian interference in our elections.” She also cited “the malfunction of 87 voting machines.”
There were objections against the votes in at least nine states. To his credit, Vice President Joe Biden rejected each objection on procedural grounds, stating that “there is no debate” and “it is over.”
Then as now, each member of Congress was within his or her rights to make an objection. But the objections were naïve at best, shameless at worst. Either way, the readiness of members of Congress to disenfranchise millions of Americans was disconcerting.
The last time Congress threw out all of a state’s electoral votes was in 1873. In addition to rejecting a portion of votes from Georgia (cast for a recently deceased candidate, Horace Greeley), Congress rejected Louisiana’s electoral votes because it concluded that the state lacked a functioning government, and it rejected Arkansas’s electoral votes for similarly grave reasons. Rejecting a state’s electoral vote is a disfavored remedy for extreme situations.
More recent efforts by Democrats to throw out electoral votes went nowhere in large part because the losing candidates — Mr. Gore, John Kerry and Hillary Clinton — had conceded the election and did not encourage Congress to reject the vote. This election is different, of course: Mr. Trump continues to argue that the election was “stolen” and “rigged,” and that “ballot stuffing” took place, and Vice President Mike Pence has indicated support for efforts to challenge the election outcome in light of those claims.
But there is no evidence to support those claims. State officials have certified the election results. Without more evidence (and none seems likely to come out), the electoral votes from every state should be accepted by all members of Congress — including all Republicans. 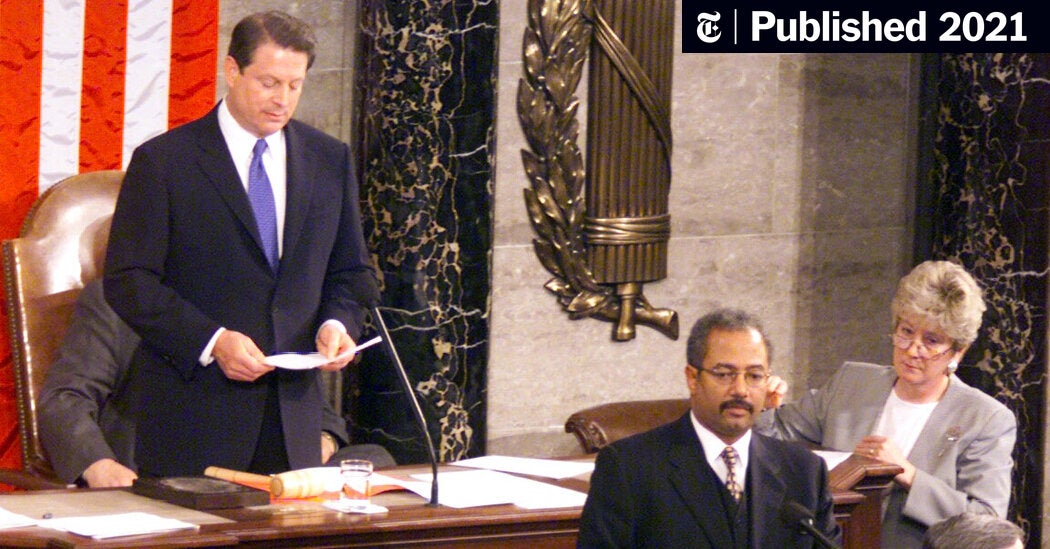 "There were objections against the votes in at least nine states. To his credit, Vice President Joe Biden rejected each objection on procedural grounds, stating that “there is no debate” and “it is over.”

They played this clip on NPR this morning. The nation is in much better hands.
Reactions: FtWorthhawkeye, artradley and cigaretteman

I’ve been thinking about this a lot. We are in a dangerous position now. Theoretically, if the GOP controlled the house and the Senate, they could with a simple majority reject California’s 55 votes for no reason whatsoever. So even if the Democrat candidate had won 324 electoral votes the GOP could overturn the election. Hell, they could reject ever electoral votes cast against them.

This is no longer unrealistic, and it is frightening. I think the best move would be to simply tweak the existing law, and require a 3/4 majority in both houses, rather than a simple majority. That would provide a reasonable level of safety from future Sedition Caucuses, while still providing a mechanism to handle legitimate disputes.
Reactions: WhiteSoxClone, ConvenientParking, bunsen82 and 2 others
B

artradley said:
I’ve been thinking about this a lot. We are in a dangerous position now. Theoretically, if the GOP controlled the house and the Senate, they could with a simple majority reject California’s 55 votes for no reason whatsoever. So even if the Democrat candidate had won 324 electoral votes the GOP could overturn the election. Hell, they could reject ever electoral votes cast against them.

This is no longer unrealistic, and it is frightening. I think the best move would be to simply tweak the existing law, and require a 3/4 majority in both houses, rather than a simple majority. That would provide a reasonable level of safety from future Sedition Caucuses, while still providing a mechanism to handle legitimate disputes.
Click to expand...

I think this would be a necessary safeguard.
Reactions: FtWorthhawkeye

If the last four years have taught us anything is that sedition is a thing. In America. Sedition. Many saw the rise of conservative press as a cancer. The cancer eating the cancer currently is the fact that ”conservatives” are turning on one another. As the old saying used to go until November 3, 2020, “Democrats fall in love, Republicans fall in line....”. I think we’re going to see Dems watching ”conservatives” eat each other this afternoon.
Reactions: Menace Sockeyes and cigaretteman
W

There is a trend where some bad precedent is set by certain Dems on a small scale or with small stakes and then Republicans follow that lead, but with the stakes considerably raised.

Objecting to the electoral college, as this professor points out, is one example. Refusing to vote on lower court judges due to an upcoming election is another example, as well as doing away with the filibuster for lower court judges.

Certain members of each party seem unable to comprehend that the shoe will eventually be on the other foot. Republicans might want to think about that now. The next time we have a wannabe dictator as president, it might be a Democrat leading a party controlling both houses of Congress and with less principled justices in the federal judiciary. And they've just laid the groundwork for that person.
Reactions: cigaretteman

We could clean up a majority of this by simply revisiting the requirement for each state to follow the election procedures dictated by their state legislature,.. no exceptions, covid or otherwise.
You must log in or register to reply here.

POLL: How Would You Vote on the 4 Charges Against Trump?

Opinion What a horrible way to run a country