A University of Iowa inspection of the sixth-floor Mayflower Residence Hall window a freshman fell from early Thursday has confirmed “no problems with the window and that it operates normally,” officials told The Gazette.


The first-year male student who fell, according to initial reports, was playing catch with other students in a residence hall room just before 4:30 a.m. Thursday when he “leaned back and fell through the screen of an open window.”


He landed on the north roof of Mayflower Residence Hall — meaning he fell about five stories, according to UI officials. The student was able to speak with first responders, who took him to the UI Hospitals and Clinics for treatment.

The university hasn’t publicly shared more details on his condition.


A preliminary assessment found no foul play, and the incident was completely accidental. The incident does remain under investigation, however.


Several UI residence hall policies could come into play in the UI investigation — including ones involving room windows and screens, which aren’t to be unhooked, for example.


Although all UI residence hall rooms have windows that open, some have air conditioner units in them — making them inoperable. Despite Thursday’s fall, the university isn’t eyeing any changes across its residence hall windows.


“The health and safety of students is a priority at the University of Iowa, and many students enjoy opening their windows in their living spaces for fresh air,” UI spokesman Chris Brewer told The Gazette.


“Hall sports can also include activities such as running/racing, jousting, gymnastics, ‘rough housing,’ etc.,” according to the policy.


And the residence hall system imposes “quiet hours” from 11 p.m. to 7 a.m. Sunday through Thursday and from 1 a.m. to 9 a.m. Friday and Saturday.


“When quiet hours are in effect no noise should be heard from another room or area.”


A private firm in 1966 built the eight-story Mayflower 12 blocks north of the Pentacrest and marketed it to students as a “luxury” dorm called the “May Flower Apartment Community,” according to the UI Office of Strategic Communication.


UI in 1979 leased portions of the building — which boasted a swimming pool on its lower level — to alleviate residence hall crowding, and the campus bought it outright in 1982. The residence hall’s setup pairs two rooms sharing one bathroom and one kitchen, housing four students each.


Although UI closed the pool in the 1980s to save money, it has since renovated the first floor to add a recreation room and classroom. Today it houses 1,032 residents. 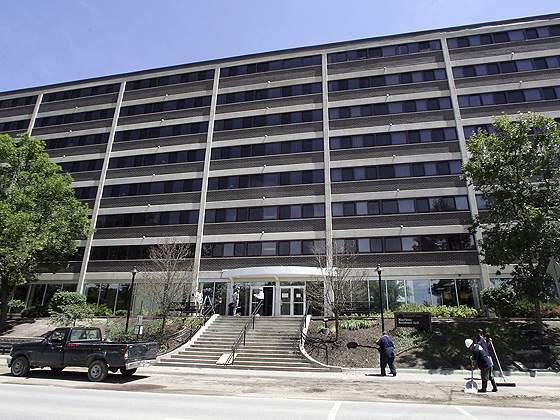 UI finds ‘no problems’ with dorm window student fell from

“The health and safety of students is a priority at the University of Iowa, and many students enjoy opening their windows in their living spaces for fresh air,” UI spokesman Chris Brewer told The Gazette.