Although University of Iowa Health Care recently received Board of Regents approval to up its spend on a new 469,000-square-foot hospital project in North Liberty by 33 percent to $525.6 million, the campus still needs state approval to proceed.


One year after the State Health Facilities Council on Aug. 31, 2021 granted UIHC approval to build the 300,000-square-foot hospital portion of its larger project, the council Aug. 30 will consider a UIHC request to up that portion’s budget from $230 million to $307.1 million — or 34 percent.


Should the five-member council deny its request, UIHC “would have to cease working on the project,” according to Becky Swift, the state’s certificate of need program manager.

The university could appeal the council’s decision.


The day after a UI attorney on July 26 submitted a cost overrun request to the state, UI officials on July 27 sought regent approval to up the total spend on its project — which includes a 169,000-square-foot academic, research, and clinic building that didn’t require state approval — from $395 million to $525.6 million.


“When we look at our budget and a change to that, one of the things we do is say, ‘Should we stop and wait for the market to change?’” Interim UIHC CEO Kim Hunter told the regents in making that July appeal. “So we really considered that. But understand that the impact of delaying our project is significant on patient care. Health care access for Iowans would be reduced. Providing complex care to our patients is already strained, and this would further strain that.”


The nine-member Board of Regents approved the budget increase after asking questions like why design and management fees are up, what happens if costs rise higher, how the hospital will manage construction change orders, and whether they can minimize costs by placing orders now.


In responding to those questions, UI officials committed to keeping spending as low as possible — expressing optimism they would succeed with lower construction bids than their worst-case preparations and potentially be back with another budget revision.


“When we realize those bids in roughly a month from now, we'll know where we stand and that will allow us to assess and come back to the Board of Regents with the results and hopefully a revised downward budget,” UI Senior Vice President for Finance and Operations Rod Lehnertz said at the time.

In the state application to up its project spend, submitted before regent’s OK’d the increase, UIHC officials told the Health Facilities Council they needed regent approval “to execute the last few bid packages, which will lock in the guaranteed maximum price associated with the project.”


“UIHC, the university, and the Board of Regents State of Iowa have taken steps to be continued good stewards of available construction moneys and have participated in the construction manager at risk contracting model to lock in a guaranteed maximum price for the project,” according to UIHC’s state application.


The construction manager at-risk model insulates the budget from “future upward fluctuation once all agreements are signed,” according to the university’s state application.


“The budget modification UIHC submits with this extension request reflects the top number UIHC will pay for the anticipated construction,” officials state in the application. “Anything in excess of the number reported today will be the responsibility of the construction manager.”


To date, UIHC has spent $12.4 million on site and land improvement work and on facilities, according to council documents.


In addition to wrapping planning and design for the entire project, officials report crews have:

Additionally, according to UIHC documents, “structural steel has been fabricated and the contractor is in the process of delivering the material to the site in preparation for erection beginning in the early part of August.”


Precast panels for the central utility plant have been ordered and are being made — with an expected September delivery.

“Russia and Ukraine are the No. 3 and No. 4 global aluminum producers,” according to UIHC documents. “Global shortages of microchips has also contributed to long production lead times (approaching 1 year) and petroleum price increases greater than 45 percent affected not only shipping costs but also petroleum based components.”

“Many major electrical equipment items now have lead times approaching 70 weeks, which will require additional labor resources to install the equipment in time to maintain the project schedule,” according to UIHC documents, which note electrician costs are up.

“To ensure on-time delivery, UIHC is having to be proactive and place orders far in advance of what would have occurred in previous years,” according to the documents. “UIHC has been able to leverage some of its long-standing relationships to lock in competitive pricing to ensure UIHC is getting the best available pricing for this necessary equipment.”

“At time of initial State Health Facilities Council approval, while UIHC did anticipate inflation and did reserve associated contingency, no one in the industry anticipated the magnitude with which these factors would affect construction given world events,” according to the university’s state application. 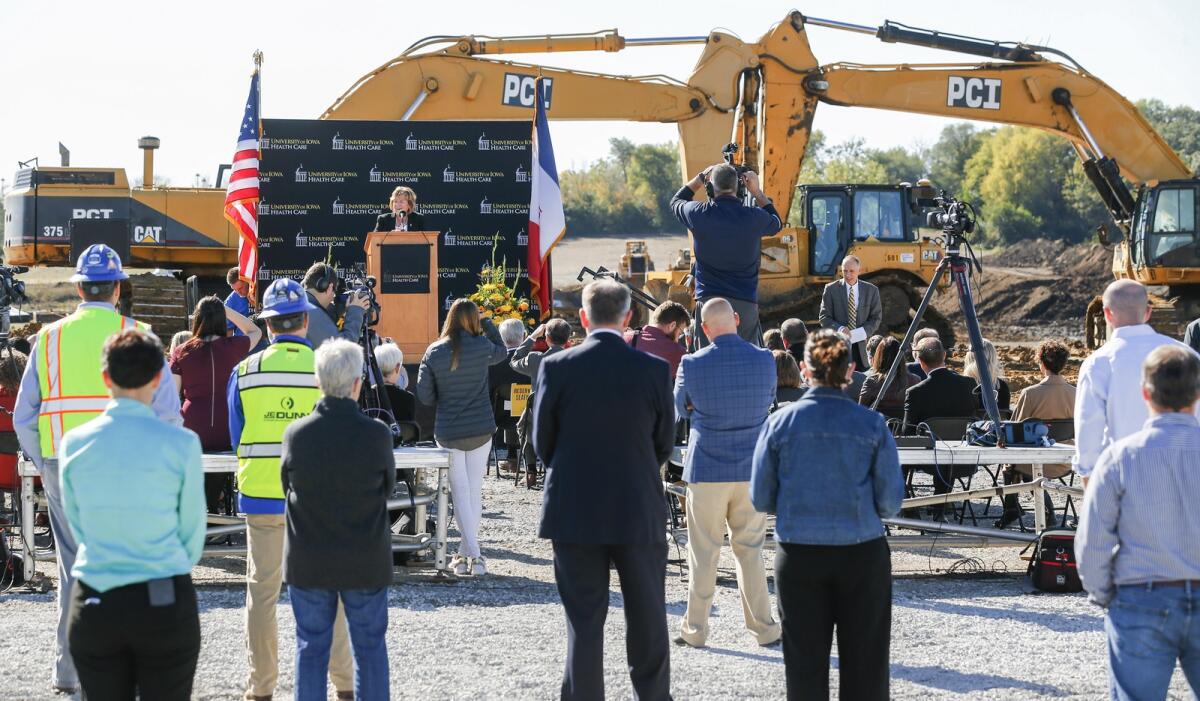 Although University of Iowa Health Care recently received Board of Regents approval to up its spend on a new 469,000-square-foot hospital project in North Liberty by 33 percent to $525.6 million, the campus still needs state approval to proceed.

This project is hugely important for the State of Iowa.

Helping to keep college educated Iowans home rather than being left with rednecks and poor residents. Iowa needs higher paying jobs and this facility certainly meets that criteria.

And it's not education related, so Reynolds is probably in support.
Reactions: HawkRCID and cigaretteman
E

Making the building with straight walls/windows would probably be a good start for the design.
Reactions: LetsGoHawks83 and cigaretteman

@cigaretteman did you have anything from the potential Mercy purchase? I didn't see anything if you did https://www.thegazette.com/higher-e...lth-care-offered-605m-to-buy-mercy-iowa-city/

CLUB215 said:
@cigaretteman did you have anything from the potential Mercy purchase? I didn't see anything if you did https://www.thegazette.com/higher-e...lth-care-offered-605m-to-buy-mercy-iowa-city/
Click to expand...

Among four proposals Mercy Iowa City entertained last year in its search for a partner was one from University of Iowa Health Care, offering over $605 million to take ownership of the community hospital and make it the “centerpiece” of a new UIHC “community division.” The...

CLUB215 said:
@cigaretteman did you have anything from the potential Mercy purchase? I didn't see anything if you did https://www.thegazette.com/higher-e...lth-care-offered-605m-to-buy-mercy-iowa-city/
Click to expand...

I have said for years that UIHC should buy Mercy Iowa City.
You must log in or register to reply here.