With a larger-than-expected freshman class materializing for this fall and hundreds of students still left to register for classes in the University of Iowa’s largest College of Liberal Arts and Sciences — where many begin their higher ed pursuits — only under 10 seats across its rhetoric courses were available as of Thursday.


The college also had few available seats in its interpretation of literature courses, diversity and inclusion courses and world language sections at the basic proficiency level — making it difficult for some first-year students to begin to fulfill, for example, the college’s “communication and literacy” general education mandate.


UI officials told The Gazette members of the campus’ academic advising team have been connecting multiple times a day with their collegiate partners to communicate about student needs.

“Over the past few weeks, we have added capacity in more than 50 introductory courses and created 10 to 20 new course sections,“ UI spokesman Steve Schmadeke said. ”Through strategic evaluation and teamwork, we are able to add spots to a class, shift instructor assignments, or release registration holds that are no longer needed.“


Emails obtained by The Gazette indicate the enrollment process this summer has been more challenging than others — and potentially more problematic for students aiming to complete degree requirements and graduate in four years.


“The idea of a student not getting into any classes is surely something you have thought about and wonder what you would do,” Schafer wrote in a July 6 email obtained by The Gazette. “If nothing happened at all with adding new seats, we would definitely be headed there. Given our constant communication with (the College of Liberal Arts and Sciences) and their efforts to open seats as needed, my hope is we avoid that situation.”


In that email, Schafer — among those tasked with coordinating a solution to a problem they didn’t create — laid out “what went wrong and who and/or what is to blame for the situation we are in.”

“It is a complex system and our troubles right now cannot be explained by pointing to one thing,” Schafer wrote. “There is no doubt that doing more proactive planning and predictions in the future will help.”


In an email to The Gazette on Thursday, Schafer said advisers never stop working to ensure student schedules are set before the start of classes and only rarely do students leave advising appointments without a full schedule.


“Advisors will follow up with students in the coming weeks if they need to adjust their schedules,” she said.


Academic advisers back in May flagged as a concern the lack of available courses for a larger-than-expected crop of first-year students in the College of Liberal Arts and Sciences — which last fall enrolled 14,033 undergraduates, more than four times the Tippie College of Business, the next closest, at 3,245 undergrads.


“We need to work together to avoid having students spillover into future (orientation advising) blocks and therefore taking seats from students who have yet to make a reservation,” Jill Trumm, senior associate director with the Academic Advising Center, wrote in a May 12 email to the center’s 30-plus academic advisers. “At a certain point, we will just run out of seats altogether.”


In that email — among several obtained by The Gazette between mid-May and last week — Trumm warned projections of fewer than 3,600 first-year students were off and the actual number of new students coming through their office would be closer to 4,100.


As the weeks progressed and new students funneled through orientation — during which they met with advisers to register for classes — the situation worsened, according to the emails.


“Things are stressful and difficult,” Schafer wrote June 30 to advisers. “I fully understand what this limited course availability is doing to your work and to students’ experiences and schedules.”


Promising that administrators were scrambling to get departments to open more seats, Schafer said, “I know this seems like putting a Band-Aid on a gushing wound.”


“And in many ways, it is,” she wrote, committing the college will be “more proactive with seat planning next year.”


“The person in (the liberal arts college) in that position had his position eliminated a few years back,” she wrote. “But (the college) has plans to create a similar position moving forward.”


Administrators also suggested enrolling freshman in classes that don’t satisfy their general-education requirements or necessarily align with their major. They “could be good electives,” Schafer wrote, acknowledging that “convincing an 18-year-old to take something they perceive as ‘not counting’ can be challenging.”


Cornelia Lang, associate dean for undergraduate education in the college, told The Gazette in an email Thursday that all majors use elective courses “as critical parts of students’ plans of study.”


And she said UI is “thrilled that we have more incoming first-year students than we were originally expecting.”


“There are always a lot of moving parts during summer orientation registration for incoming students, and the process has worked as intended over the past several weeks,” Lang said. “I am really pleased with the way our academic departments have worked with us to make adjustments, including expanding enrollments in some areas to ensure our incoming students can take the courses they want and need.”


Schafer in emails to her team expressed gratitude for their efforts to accommodate students and set them up with the best possible schedules — despite fraught conditions both evident and not to freshmen registering for the first time.


“I continue to appreciate the teamwork that goes into this massive effort of getting our entering class registered for fall,” she wrote. “It is not easy right now and you all are persevering through it all.”


Although a search in the UI course catalog might seem to show some open seats left for students, many come with caveats or restrictions. A search for diversity courses in the College of Liberal Arts and Sciences — a gen ed requirement — on Thursday afternoon showed three “open” courses, although not really.


One of those courses — African American History to 1877 — had one open seat in the lecture but no “unreserved seats” in the required paired discussion sections for the course. Neither of the other two courses had any “unreserved seats.”


Seats can be reserved for a variety of reasons — including for students with specific majors or for “LINK students.” The IowaLink program is for “recruited, talented, and motivated students whose academic background might not have provided adequate preparation for some of the college courses.” Students admitted to the IowaLink program often were recruited for athletics or the arts. All open rhetoric seats, as of Thursday, were reserved for LINK students.


To the question of student registration struggles, UI spokesman Schmadeke said they don’t always get their first pick. “But we do everything we can to meet their needs,” he said.


That day, Schafer sent an email to advisers acknowledging their deep dissatisfaction with having to create fall schedules with which they and their students aren’t happy.


But, she added, “We do know that some classes will not be adding seats and we don’t want students to remain on a waitlist in a hopeful way and not have that pan out. We want to let students know that getting something when they can get it is better than waiting.” 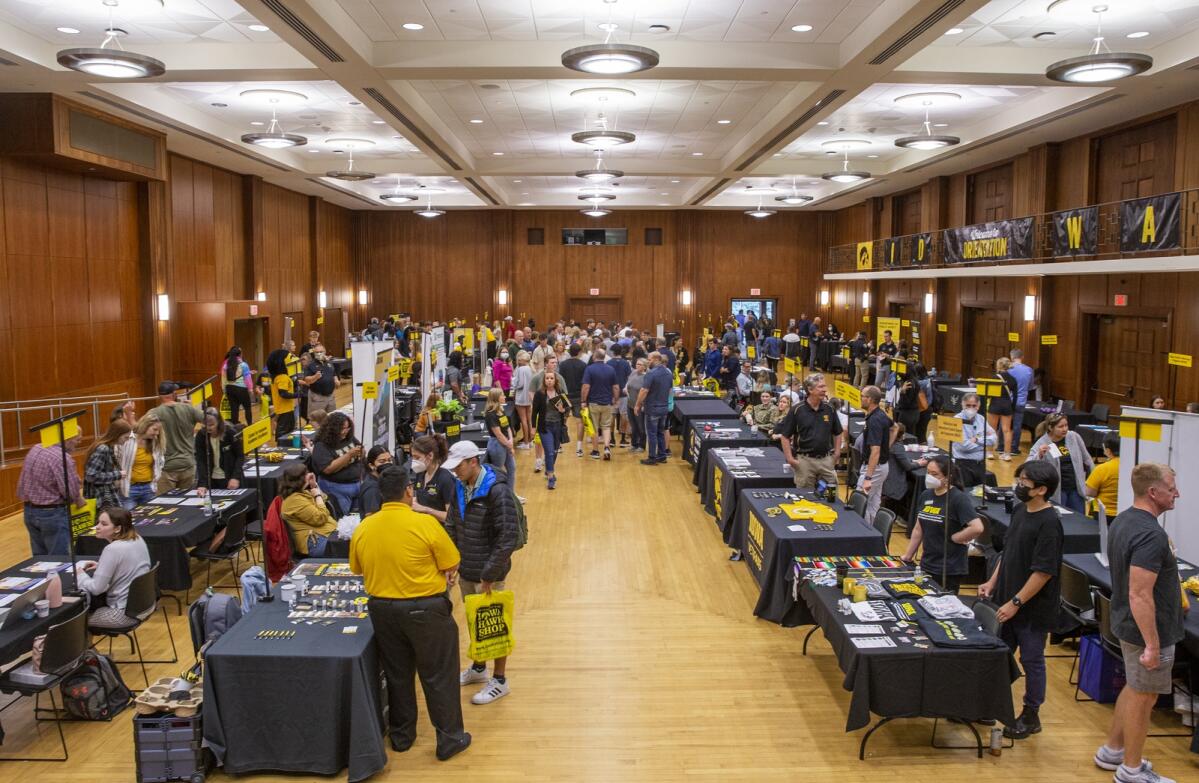 UI scrambling to find seats for more freshmen than expected

Emails obtained by The Gazette indicate the enrollment process this summer has been more challenging than others — and potentially more problematic for students aiming to complete degree requirements and graduate in four years.