Good luck with that:

Sen. Ben Sasse on Thursday called upon the Republican Party to embrace an optimistic future with "leaders who tell the American people that we can write our destiny."
In a widely watched address at the Ronald Reagan presidential library in California, Nebraska's two-term senator said the party "cannot be a cult of personality and grievance," but should provide "a big tent" for Americans who want to build "a big, optimistic, Reagan-like aspirational future."
"We've got to do better," Sasse said.
"We've got to be speaking to people who tuned both parties out long ago.

"We've got to be speaking to men and women who can't stand preach-to-the-choir-politics because in the real world they're the ones getting things done."

Sasse, whose name shows up on most lists of potential Republican presidential candidates in 2024, said "I'm a Republican because I'm a conservative.


"And I'm a conservative because I believe in gratitude. Everyone born here is blessed and the heart of keeping this Republic is starting with gratitude.
"American conservatives don't traffic in grievance. We don't believe in whining. Our party must reject politicians who tell the American people that we're victims."

Sasse said "the defining national security question of the next two decades" is going to be "whether there will be a second American century or whether it will be a CCP (Communist Chinese Party) order."
"We need a revival of American self-confidence," he said. "We need leaders who live and breathe that American self-confidence so we can inspire a generation of self-confident Americans.
"We can build a new American order that will see us through the coming conflict with the Beijing tyrant seeking to export surveillance-state autocracy."
The American people "don't like feckless leaders who humiliate the nation, as the last and current administrations did in bowing to the Taliban," Sasse said in a shot aimed at both former Republican President Donald Trump and Democratic President Joe Biden.


"The catastrophe in Afghanistan is a stark example of how defeatism at home produces chaos abroad," he said.
"Think how long it's been since the American people have heard a big, optimistic, Reagan-like inspirational message," Sasse said.
The "Time for Choosing" series is designed to provide "a forum for leading voices in the conservative movement to address critical questions facing the future of the Republican Party."
Sasse was most recently preceded by Gov. Larry Hogan of Maryland, a potential 2024 GOP presidential candidate who said during his address that Republicans are "desperately in need of a course correction" after the presidency of Donald Trump.


Next on the schedule following Sasse is Rep. Liz Cheney of Wyoming, who will speak later this month.
Cheney, vice chair of the House select committee that is investigating the Jan. 6 attack on the Capitol last year fueled by Trump, faces a tough Republican primary election challenge in August prompted largely by Trump who has campaigned against her. 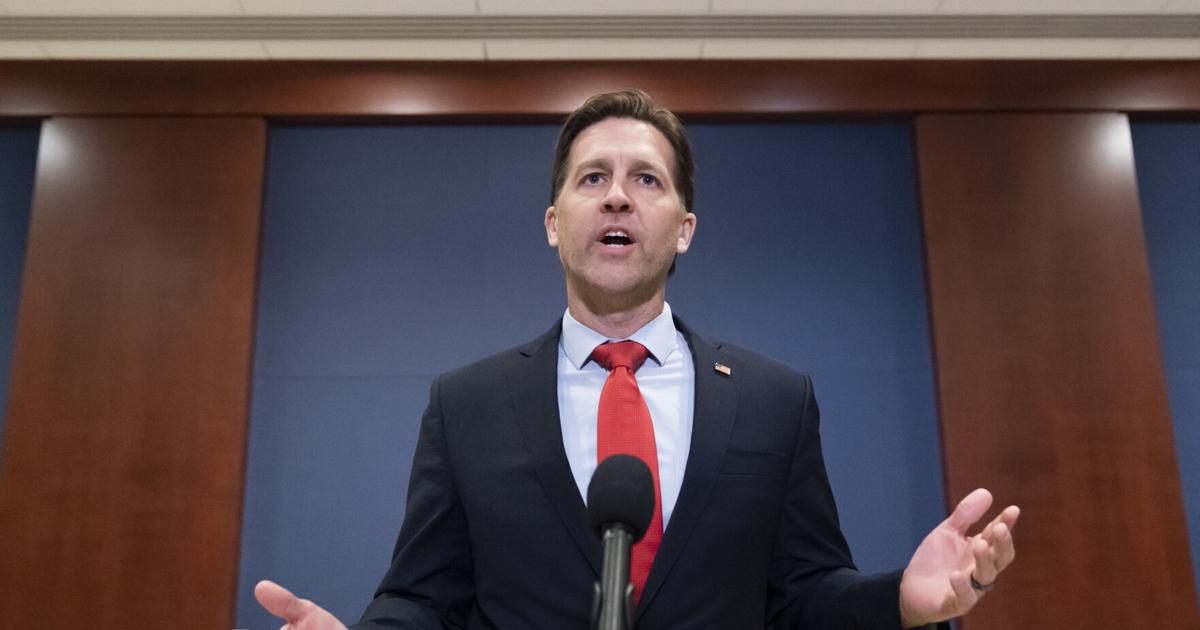 In a widely watched address at the Ronald Reagan presidential library in California on Thursday night, Sen. Ben Sasse called upon Republicans to build a big, bold, aspirational future in

What a freaking hypocrite. Look at his voting record.
Reactions: gohawks50, Chishawk1425, cigaretteman and 1 other person

ft254 said:
What a freaking hypocrite. Look at his voting record.
Click to expand...

F him. He had the chance to demonstrate leadership during the last SCOTUS nomination hearings. He failed. As I said back then, he will be around soon enough trying to sell a book where he bemoans the lack of civility and common sense in DC.
Reactions: hawkeyetraveler, Chishawk1425 and cigaretteman

Back when politics seemed a bit less apocalyptic and unpredictable than it is today, people would say that, in a presidential race, the more optimistic candidate usually wins. Barack Obama, George W. Bush, Bill Clinton, Ronald Reagan and John F. Kennedy — all different but extremely optimistic in their own ways — were offered as proof.
Sign up for a weekly roundup of thought-provoking ideas and debates
Today, optimists are in short supply in both parties, but particularly in the GOP. Can you think of any Republican who offers a sunny vision of the future?
Sen. Ben Sasse of Nebraska — who might or might not want to run for president, but has long had the look of someone who does — wants to be that optimist. On Thursday, he gave a speech to the Ronald Reagan Presidential Foundation & Institute that in a different time might have been seen as standard fare for someone laying the groundwork for a run at the White House. But today, it stands in stark contrast with where his party is going.


That contrast is so vivid that, when it’s laid out, it reveals as much about the dark vision of the GOP as any speech by one of the people far more likely to lead the party in the near future.
Sasse has some policy recommendations, most of which are ordinary conservative ideas, such as more military spending. But the meat of his speech from Thursday is a critique of Republican politics. He can’t frame it entirely that way, so he casts blame on both parties for what are primarily Republican sins, and tosses some arrows at Democrats for being too far left.
He does offer an honest assessment of what his party has become, arguing “What this party cannot be is a cult of personality and grievance.” He goes on:

American conservatives don’t traffic in grievance. Our party must reject politicians who tell the American people that we’re victims. We embrace leaders who tell the American people that we can write our own destiny. Americans have never wallowed in self-pity. The people who built this country and passed it on to us sought to make it better and more expansive and more inclusive. They weren’t whining.
Click to expand...

As a description of the Republican Party in 2020, it’s hard to come up with something more concise than “a cult of personality and grievance.” But when Sasse says American conservatives “don’t traffic in grievance,” you have to ask what planet he’s on. Grievance has certainly been at the heart of conservatism for the last decade and a half at a minimum, and probably much longer.

But at the moment, things seem to be going quite well for them. They are likely to take back at least one chamber of Congress, and their grip on the courts will enable them to roll back decades of social and political advancement. Some of their most popular politicians, especially Florida Gov. Ron DeSantis, are building something like a fascism for the 21st century, in which state power is a weapon to scapegoat minorities and punish enemies. And Republicans love it.


Sasse decries the “rage peddlers who want just this dysfunction, who lust only for performative shouting” — like Donald Trump, whose name he never mentions — but argues that we’re suffering from an optimism deficit:

Think how long it’s been since the American people have heard a big, optimistic, Reagan-like aspirational message. A 33-year-old American has seen a Republican president win the popular vote only once in her entire lifetime (and that was in the aftermath of 9/11, when the Dems decided to run an heiress-marrying, throwback anti-war candidate from the ‘60s). That is the only time a Republican has won the vote in the lifetime of anyone 33 and under in this country.
Click to expand...

Put aside the snide little dig at John F. Kerry (it’s hard not to think that Sasse is trying to show that he can be a jerk, too), and you get to the heart of his problem. Most Republicans see the fact that they can take power without winning the support of a majority of the public as a cause for celebration, not evidence of a problem.

From where they sit, minority rule is positively glorious. To take just one example: The last two Republican presidents (George W. Bush and Donald Trump) took office despite the fact that more voters chose their opponents. They built a Supreme Court supermajority in part because the design of the Senate gives Republicans obscenely disproportionate power. And that Supreme Court is giving them victories such as the upcoming demise of Roe v. Wade while validating their efforts to undermine democracy and entrench that minority rule.

What’s for a Republican not to like?
Meanwhile, rage and resentment work, especially in Republican primaries. They attract people, they motivate people, and they resonate with everything Republican politicians and media figures have been convincing their base to believe for years. And whining? Trump is without doubt the whiniest politician in American history, and his command of the GOP is unchallenged.

I have some problems with Sasse (he’s never been above promoting simple-minded populism), but he’s less repugnant than many of his Republican colleagues. If he wants to keep making the case to Republicans that they should cast off their noxious politics of grievance and find a more optimistic path, more power to him. Unfortunately, there’s little reason to think many Republicans will show any interest.

ft254 said:
What a freaking hypocrite. Look at his voting record.
Click to expand...

He is Projecting. A true MAGA.

Agree with all the comments above. His actions rarely match his words.

"The time for talk is over," while Sass keeps offering nothing but
Reactions: cigaretteman

Chishawk1425 said:
He is Projecting. A true MAGA.
Click to expand...

Yep, I'm guessing only MAGAs can define the tent.
You must log in or register to reply here.

The Man Who Won the Republican Party Before Trump Did