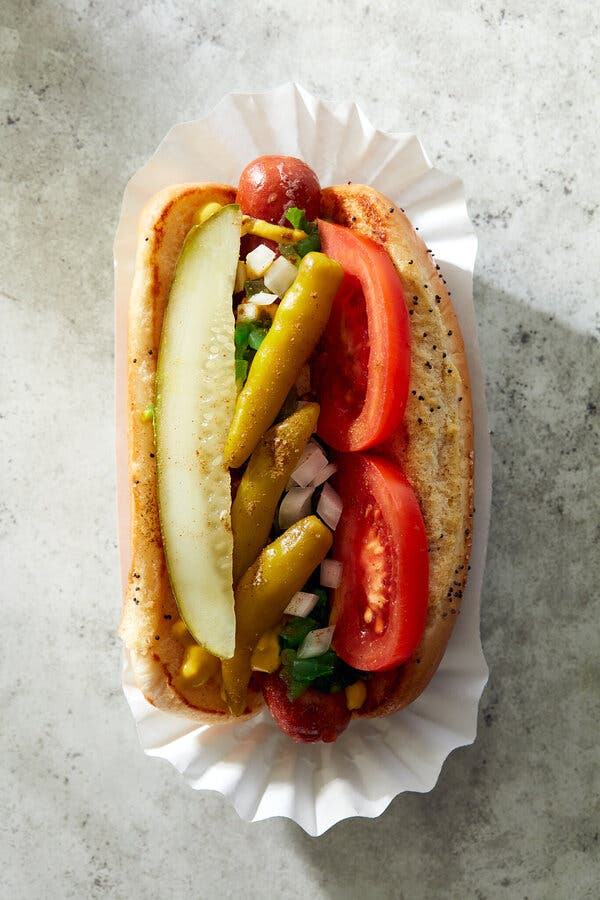 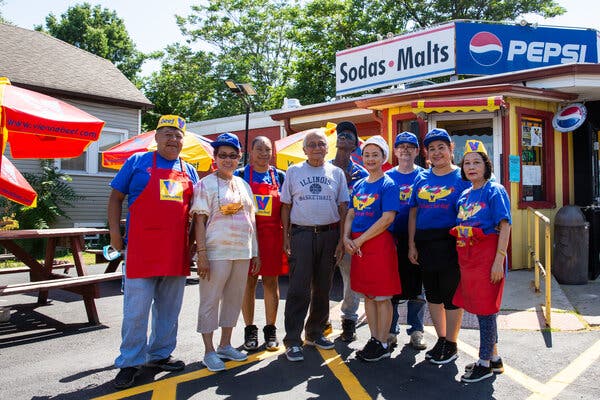 “This is the development of a family, or what family can look like,” said Heidi Ratanavanich about Al’s Drive-In, their family’s hot-dog stand in Maywood, Ill.Credit...Anjali Pinto for The New York Times

The hot dog comes in a freshly steamed bun, piping hot — so hot that you might have to blow on it before taking a bite. “Come as you are or Eat in your car,” reads the sign above the restaurant, which has been around since 1955.
Even in the Midwestern summer heat, Al’s dogs hit the spot. Chicago is indisputably a hot-dog town, and there may be no better time than summer to feel that sunshine in your hands.
The Chicago dog has a special place in the city’s heart: a humble, affordable food that anyone can enjoy, across cultures, creeds and proclivities. With French fries, it’s lunch; on its own, a snack. A source of civic pride, the Chicago-style hot dog is a nexus for many people’s relationship to a city they so adore.
Therein lies its magic: In its architectural specificity, the Chicago dog has been largely standardized and agreed upon, making it a unifying force that binds the city together. Everyone has their favorite spot, sure, and of course there are subtle and delicious differences among the many stands, but the product itself never strays too far from the canonical design.
So what makes a great one?
Image 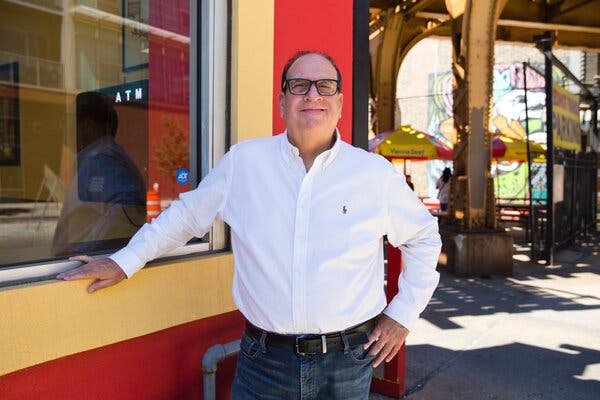 Raised on the North Side of Chicago, Jeff Greenfield runs Redhot Ranch, which specializes in a minimalist Chicago-style hot dog often referred to as the “Depression dog.”Credit...Anjali Pinto for The New York Times

For Jeff Greenfield, the owner of Redhot Ranch, it’s the natural casing of a Vienna Beef hot dog. That particular brand, he believes, provides the quintessential snap, yielding to a juicy frank bursting with well-balanced flavor.
In fact, you’d have to look hard to find a Chicago dog in the city that’s not made by Vienna Beef, a local company founded in 1893 by Emil Reichel and Samuel Ladany, immigrants from Austria-Hungary. According to Tom McGlade, a senior vice president of marketing at Vienna Beef, there are more hot-dog stands in the Chicago area serving the brand than there are Wendy’s, Burger King and McDonald’s locations combined.
So many of these stands display the vibrant logo on their signage as a badge of pride and authenticity that you might think the company was a favorite sports team.
Mr. McGlade, 62, added that the brand’s omnipresence might have to do with its relationship with the vendors. By staying regional and supporting small businesses, Vienna Beef has made itself a primary player in the story of the Chicago dog.
At RedHot Ranch (where Vienna Beef-themed umbrellas shade the picnic tables outside), the hot dogs are boiled in old-fashioned ceramic crocks. Mr. Greenfield, 68, loves a chargrilled dog as much as the next person, but says the old method yields the best flavor. Boiling the franks in water preserves their juiciness, letting you taste them as they are.
Reactions: Mike Zierath, blackbones and win4jj 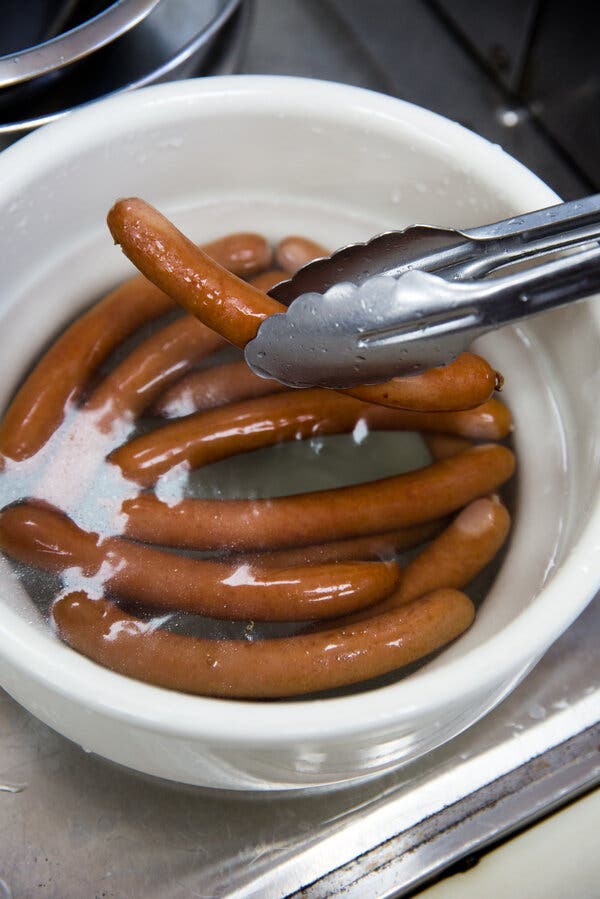 Before opening his first location on 35th Street, Mr. Greenfield purchased a bunch of ceramic crocks to boil his franks the old-fashioned way.Credit...Anjali Pinto for The New York Times 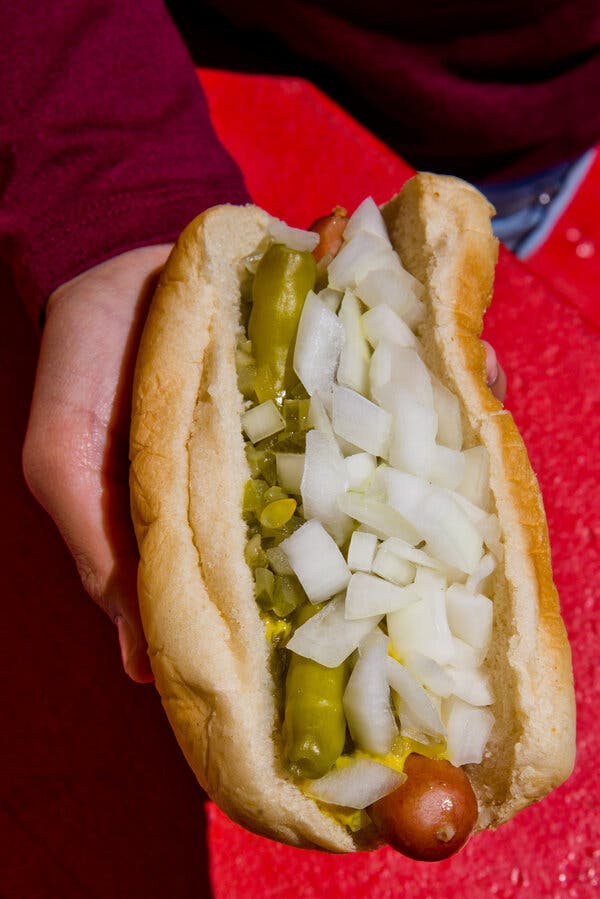 Some Chicagoans said the neon-green relish is optional. Others called it “goofy,” “nuclear” and mostly for fun.Credit...Anjali Pinto for The New York Times

“Boy, oh boy,” he said. “When you bite into them and you get that snap and that burst of flavor, it’s really remarkable.”
For those who don’t eat beef, vegan options abound — and lately, the demand for these alternatives has been high.
In May, Portillo’s, one of the city’s biggest local hot-dog chains, released its first vegan Chicago-style hot dog, called the Garden Dog. By mid-June, it had completely sold out of the franks.
On a recent visit to Clark Street Dog, the vegan hot dog was sold out as well. One could arguably blame William Clayton, a vegetarian who works behind the bar and eats several dogs a week. “I usually get two of them,” said Mr. Clayton, 39, who was waiting on a replenishing shipment that morning. “They’re on point. No snap, but firm.”
The hot dog may be an elemental part of the Chicago dog experience, but the “garden” that it’s dragged through is just as important.
At the Wiener’s Circle, a Chicago-style vegetable dog means all of the toppings and condiments in a bun, with no frank. “It’s actually good,” basically a more involved tomato sandwich, said Antoinette Morris, a shift supervisor who has worked there off and on for 22 years (all the while hurling insults at her adoring customers, as is the house schtick).
For Ms. Morris, 39, the celery salt is crucial, as are the sport peppers, which look and taste like a smaller, spicier pepperoncini. She likes to take a bite of pepper with each bite of hot dog. “But I like my food spicy,” she said.
Image 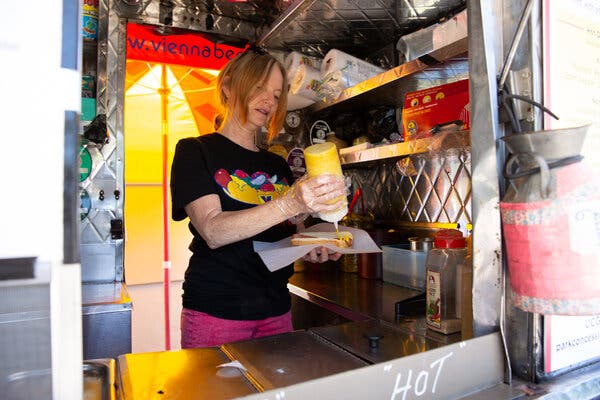 Kim Basille, who runs several hot dog carts around the city, said she loves Chicago because “it’s a working-class town,” and “people are down-to-earth and friendly.”Credit...Anjali Pinto for The New York Times

Kim Basile, a painter who runs the Kim and Carlo’s hot-dog carts outside the Shedd Aquarium and the Field Museum, said the sport peppers are the most common topping that people omit. She has also been selling vegetarian Chicago-style dogs since she started her business in 1995 to pay for art school. (After a detour of some years, she expects to finally graduate next spring.)
“It’s not like I’m a hard-core vegetarian or vegan or anything,” said Ms. Basile, 57, but she prioritized them for her customers anyway.
It was the day Ms. Basile started calling her dogs vegan, rather than just vegetarian, that she saw an uptick in sales. It didn’t hurt that after the pandemic, she found a good local company that supplied great-tasting vegan sausages. Their paprika-tinged flavor is comforting and chorizolike — no snap, but firm — and 10 to 15 percent of her customers, most of them repeat visitors, order it.
But since her carts are in a tourist-heavy area, Ms. Basile has also been able to watch as hundreds of people enjoy their first Chicago dog. In many ways, she has become a steward of the form, and as such, she respects that the classic version does not allow for ketchup. She even has a playful sign, next to a warning about voracious birds, that reads, “You must dance for ketchup!”
But personally, she couldn’t care less. For the most part, she said, people visiting Chicago for the first time want to try the real thing first.
Image 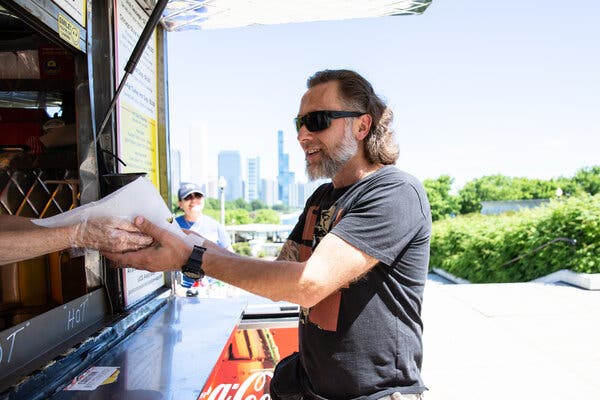 In Chicago, mustard is queen. Ketchup lovers who visit a Kim and Carlo’s hot dog cart will need to dance for their favorite condiment.Credit...Anjali Pinto for The New York Times

The ketchup issue is part of the lore of the Chicago dog, but it’s hard to tell for whom it’s a joke and for whom it’s a law. Many contend that ketchup on a Chicago-style hot dog is redundant, since relish and tomatoes already provide those sweet, vinegary flavors.
Mr. Clayton, the bartender at Clark Street Dog, remembers having to kick a belligerent man out of his bar for harassing a customer, a young woman who was enjoying a ketchuped dog with her beer.
“We don’t turn anyone away that wants ketchup on their hot dog,” said Mr. Greenfield of Redhot Ranch, “but usually we try to limit it to children 12 years and under.” (Mr. Kern of Portillo’s told the same joke, but the age barrier was 8 years old.)
Even so, there is a “Bell of Shame” that customers at his South Side location have to ring if they ask for ketchup. (This joke crescendos in the new FX show “The Bear,” set in Chicago, when one character asks another, “What kind of asshole is gonna put ketchup on a hot dog?”)
Before he started his own restaurants, Mr. Greenfield remembers frequenting Gene & Jude’s, a neighborhood hot-dog counter whose motto reads: “No Seats, No Ketchup, No Pretense, No Nonsense.”
The story goes that children were getting bags of hot dogs from Gene & Jude’s and going over to the McDonald’s next door to ask for ketchup packets. When that McDonald’s kept running out of ketchup, the restaurant started charging for it. 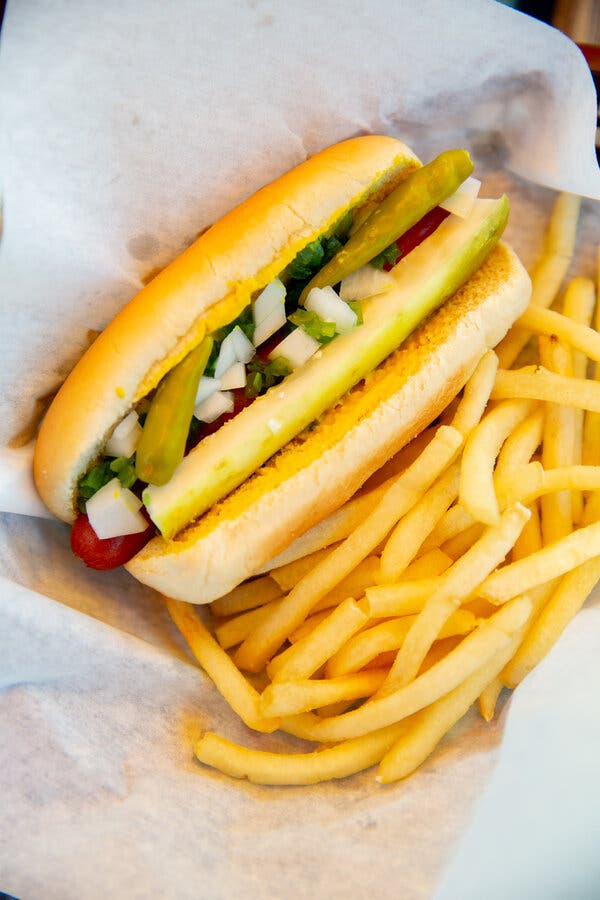 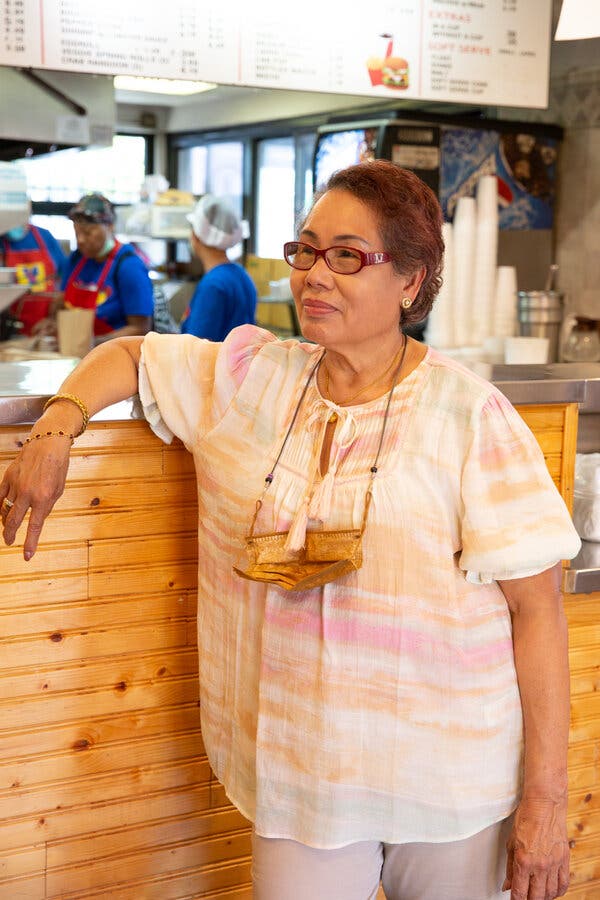 The Chicago dog was one of the first things Sue Ratanavanich and her husband ate when they moved to Illinois in 1979. Today, it’s a mainstay of her restaurant.Credit...Anjali Pinto for The New York Times

It seems that by the teen years, though, the ketchup impulse wears off. Al’s Drive-In, run by Heidi Ratanavanich’s family, is right across the street from Proviso East High School. The restaurant’s general manager, Art Boonma, said only about 0.5 percent of his customers ask for ketchup on their hot dogs.
But if you went to Al’s today and wanted ketchup, Mr. Boonma, 72, would probably give it to you. The more he sees his customers happy, he said, the happier he is.
Ratanavanich’s mother, Sue, 77, who owns Al’s, talks about the restaurant as an integral part of the community. She likes to brag that none of her employees ever really leave her; if they exit the job, they always come back to visit, often bringing their own children.
For Heidi Ratanavanich, that affinity is even stronger. “I grew up at Al’s,” they said. “As a kid, eating a hot dog was like eating food from home.”
The Chicago staple had become a vocation, and an object of affection for the family. So much so that Ratanavanich’s mother was even OK with the tattoo — at least it was a hot dog.
Recipe: Chicago-Style Hot Dogs

I would happily drink beer with a Chicago-style dog. Pilsener, Kölsch or gose would be my choices, but your own favorite style will also make a great combination. Few remember, but when the first Shake Shack kiosk opened in Madison Square Park, it was a hot-dog stand that offered a great Chicago-style dog. You could even get a little split of Champagne with it, which was a fine pairing with the brisk, tart-sweet components and the frank. It is not an outlandish notion. Though it’s no longer open, a London restaurant, Bubbledogs, specialized in American hot dogs with Champagne from small producers. Other sparkling wines like cava, crémant and sparkling riesling would be delicious, too. So would a still German riesling, whether dry or moderately sweet. ERIC ASIMOV

Chicago dogs are in fact the best hot dog sandwich.
Reactions: blackbones and dgordo
You must log in or register to reply here.