By Jonathan Rauch and Peter Wehner
Mr. Rauch is a senior fellow at the Brookings Institution. Mr. Wehner is a senior fellow at the Ethics and Public Policy Center.
American democracy has often confronted hostile forces from outside the United States; rarely has it been under as much of a threat from forces within the nation. The danger arises from illiberalism on the left and the right. Both sides are chipping away at the foundations of the American Republic; each side seems oblivious to its own defects.
Again and again, we have heard conservatives argue that even if you believe that Donald Trump is flawed and the MAGA movement is worrisome, the left is much more dangerous. We disagree. Fears about the left’s increasingly authoritarian, radical tendencies are well grounded; but they have blinded many conservatives to the greater danger posed by the right, which we believe is a threat to our constitutional order and therefore to conservatism itself.
We come to our view after writing and warning about the illiberal left for much of our careers. One of us wrote a book nearly 30 years ago criticizing those who would limit free thought by restricting free speech; the other has been sounding alarms about left-wing ideology since his days as an official in the Department of Education during the Reagan years.
Since then, the left has grown more radical, more aggressive and less tolerant. With the help of social media and influence in academia — and sometimes in newsrooms and corporate H.R. departments — a small number of die-hard progressives (they make up only about 8 percent of the public, according to one recent survey) exert a hugely disproportionate influence on the culture. Progressives are “often imposing illiberal speech norms on schools, companies and cultural institutions,” the liberal journalist Jonathan Chait writes. There have been many examples of squelching arguments that although controversial deserve full and frank airing in a free society. Universities have attempted to kick off their campuses Christian ministries that require their leaders to be Christian, and we have written in these pages about efforts to weaken protections for religious liberty.

Structural racism — the perpetuation of de facto discrimination by ingrained social arrangements and assumptions — is a reality in American life. But the hodgepodge of ideas in the bucket that has come to be known as “critical race theory” includes radical claims that deny the enduring value of concepts like equality of opportunity and objectivity and reject “the traditions of liberalism and meritocracy” as “a vehicle for self-interest, power, and privilege.” The most extreme versions of these ideas might not be taught in high schools (yet), but their influence is undoubtedly being felt.
The progressive movement, then, is increasingly under the sway of a totalistic, unfalsifiable and revolutionary ideology that rejects fundamental liberal values like pluralism and free inquiry. And conservatives aren’t hallucinating about its influence. Surveys show that 62 percent of Americans and 68 percent of college students are reluctant to share their true political views for fear of negative social consequences. A Cato Institute study found that nearly a third of Americans — across the political spectrum, not just on the right — say they’re worried about losing a job or job opportunities if they express their true political views. Another study suggested that the level of self-censorship in America may be three times what it was during the McCarthy era.
The left is not solely responsible for creating these fears, but it has played the most significant role. Yet even granting all that, the threat from the illiberal right is more immediate and more dangerous. If that wasn’t clear before the last presidential election and the violent attack on the U.S. Capitol on Jan. 6, 2021, it should be clear now.
Any account of the malignancy of the American right has to begin with Mr. Trump, whose twisted sensibilities continue to define the Republican Party. It was he who attempted what no president had ever tried: overturning an election. He based his effort on a huge campaign of disinformation. Mr. Trump pressured the vice president, governors, secretaries of state, election officials and appointees at the Department of Justice to join him in his efforts. One of his lawyers reportedly proposed a plan to nullify the election. Congress’s Jan. 6 committee will reveal more and possibly worse.
The Republican Party, rather than spurning Mr. Trump and his efforts, has embraced them. Around the country, prospective Republican candidates, far from opposing #StopTheSteal lies and conspiracy theories, are running on them in 2022, according to a Washington Post tally. Any prominent Republican today who disputes #StopTheSteal can expect to be targeted by the base, booed at any large gathering of Republicans, censured by party apparatchiks and possibly threatened with physical violence. 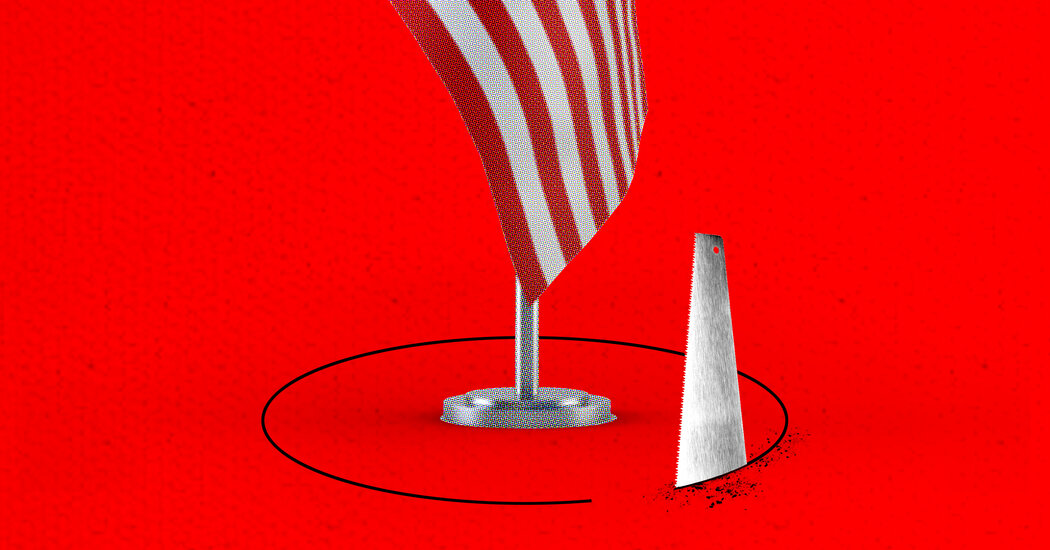 Illiberalism is a problem wherever it rears its head.

Dismayingly few Republican leaders stand foursquare against the base’s insistence that any election Mr. Trump and his followers might lose is rigged. The result is that Republicans are shattering faith in the integrity of our elections and abandoning their commitment to the peaceful transfer of power — the minimum commitment required for democracy to work. This is an unforgivable civic sin, but it hardly exhausts the lists of concerns.
Many Republicans are now openly hostile to the processes Americans rely on to separate fact from fiction. There’s also the deepening cult of despair that has led some on the right to believe that all means of resistance are appropriate. In fact, catastrophism is quite fashionable on the American right these days. Every election is a “Flight 93” confrontation against an apocalyptic enemy; every effort, no matter how extreme, is justified. That attitude is not merely at odds with reality; it is incompatible with liberal democracy’s foundational requirement that Americans compromise and coexist civilly in order to share the country.
Partly as a result, the MAGA movement is drifting toward authoritarianism. The most important media personality on the right, Tucker Carlson of Fox News, released a disingenuous three-part documentary in November suggesting that the Jan. 6 insurrection was a “false flag” operation. He and others in MAGA World, including Mr. Trump, also promote Hungary, which Freedom House said in its 2018 report is “sliding into authoritarian rule,” as a model for the United States. The Republican Party is also drifting ever closer to the open embrace of political violence and martyrdom, not merely excusing but defending actions like Ashli Babbitt’s effort to break into the House’s inner sanctum on Jan. 6 — actions that came within seconds of succeeding.
In a recent survey, nearly 40 percent of Republicans agreed that “if elected leaders will not protect America, the people must do it themselves, even if it requires violent actions.” Around the country, Republican officials who defend the election and count votes honestly have been threatened and have needed to leave their homes or live under guard. Josh Mandel, a Republican running for the open Senate seat in Ohio and leading in the polls, said in the aftermath of President Biden’s vaccine mandate: “Do not comply with the tyranny. When the Gestapo show up at your front door, you know what to do.”
Intimidating election officials, lying about elections and storming the Capitol are not actions promoted among mainstream Democrats. And while the progressive left undoubtedly has influence in the Democratic Party, if it exercised the near-total dominance that Republicans claim, Joe Biden would not have won the Democratic nomination. Conservatives certainly have their disagreements with President Biden, but he has not defunded the police, attempted to pack the Supreme Court or promoted the Green New Deal or Medicare for All.
But assume that your threat assessment is different from ours; that as a conservative Republican you believe the danger to the nation is greater from the far left than from the MAGA right. You should still speak out against what is happening to your movement and your party for two reasons: The sins of the left do not excuse the sins of the right; and what is happening on the right is wrecking authentic conservatism in ways the left never could.
In his new book, “We the Fallen People: The Founders and the Future of American Democracy,” a Wheaton College historian, Robert Tracy McKenzie, shows that the founders took a deeply conservative view of human nature. They believed that humankind is flawed and fallen, distracted by passions and swayed by parochial interests. Americans, the founders believed, were no exception. Yet they also believed that what John Adams called a “well-ordered Constitution” could go a long way to compensate for human flaws.

In classic conservative fashion, they designed the U.S. Constitution, and its attendant institutions and norms, both to constrain us and to help us be our better selves. The MAGA right has no love for those institutions and norms. It inflames ugly passions and warps reality. It is profoundly anticonservative, capable of twisting in any direction for the sake of raw power. It represents a profound break with the American conservative tradition.
And so to regard the radical left as a reason to excuse, minimize or ignore the malign movement on the right is an abrogation of conservative duty and principle. If MAGA prevails, conservatism will be gravely injured — and American democracy will be, too.
You must log in or register to reply here.

Opinion No, MSNBC is not the Fox News of the left