What a Dying Lake Says About the Future

By Paul Krugman
Opinion Columnist
A few days ago The Times published a report on the drying up of the Great Salt Lake, a story I’m ashamed to admit had flown under my personal radar. We’re not talking about a hypothetical event in the distant future: The lake has already lost two-thirds of its surface area, and ecological disasters — salinity rising to the point where wildlife dies off, occasional poisonous dust storms sweeping through a metropolitan area of 2.5 million people — seem imminent.
As an aside, I was a bit surprised that the article didn’t mention the obvious parallels with the Aral Sea, a huge lake that the Soviet Union had managed to turn into a toxic desert.
In any case, what’s happening to the Great Salt Lake is pretty bad. But what I found really scary about the report is what the lack of an effective response to the lake’s crisis says about our ability to respond to the larger, indeed existential threat of climate change.
Advertisement
Continue reading the main story


If you aren’t terrified by the threat posed by rising levels of greenhouse gases, you aren’t paying attention — which, sadly, many people aren’t. And those who are or should be aware of that threat but stand in the way of action for the sake of short-term profits or political expediency are, in a real sense, betraying humanity.

That said, the world’s failure to take action on climate, while inexcusable, is also understandable. For as many observers have noted, global warming is a problem that almost looks custom-designed to make political action difficult. In fact, the politics of climate change are hard for at least four reasons.
First, when scientists began raising the alarm in the 1980s, climate change looked like a distant threat — a problem for future generations. Some people still see it that way; last month a senior executive at the bank HSBC gave a talk in which he declared, “Who cares if Miami is six meters underwater in 100 years?”
This view is all wrong — we’re already seeing the effects of climate change, largely in the form of a rising frequency and intensity of extreme weather events, like the megadrought in the American West that is contributing to the death of the Great Salt Lake. But that’s a statistical argument, which brings me to the second problem with climate change: It’s not yet visible to the naked eye, at least the naked eye that doesn’t want to see.
Weather, after all, fluctuates. Heat waves and droughts happened before the planet began warming; cold spells still happen even with the planet warmer on average than in the past. It doesn’t take fancy analysis to show that there is a persistent upward trend in temperatures, but many people aren’t convinced by statistical analysis of any kind, fancy or not, only by raw experience.

Then there’s the third problem: Until recently, it looked as if any major attempt to reduce greenhouse gas emissions would have significant economic costs. Serious estimates of these costs were always much lower than claimed by anti-environmentalists, and spectacular technological progress in renewable energy has made a transition to a low-emission economy look far easier than anyone could have imagined 15 years ago. Still, fears about economic losses helped block climate action.

Finally, climate change is a global problem, requiring global action — and offering a reason not to move. Anyone urging U.S. action has encountered the counterargument, “It doesn’t matter what we do, because China will just keep polluting.” There are answers to that argument — if we ever do get serious about emissions, carbon tariffs will have to be part of the mix. But it’s certainly an argument that affects the discussion.
As I said, all of these issues are explanations for inaction on climate, not excuses. But here’s the thing: None of these explanations for environmental inaction apply to the death of the Great Salt Lake. Yet the relevant policymakers still seem unwilling or unable to act.
Remember, we’re not talking about bad things that might happen in the distant future: Much of the lake is already gone, and the big wildlife die-off might begin as early as this summer. And it doesn’t take a statistical model to notice that the lake is shrinking.
In terms of the economics, tourism is a huge industry in Utah. How will that industry fare if the famous lake becomes a poisoned desert? And how can a state on the edge of ecological crisis still be diverting water desperately needed to replenish the lake to maintain lush green lawns that serve no essential economic purpose?
Finally, we aren’t talking about a global problem. True, global climate change has contributed to reduced snowpack, which is one reason the Great Salt Lake has shrunk. But a large part of the problem is local water consumption; if that consumption could be curbed, Utah needn’t worry that its efforts would be negated by the Chinese or whatever.
So this should be easy: A threatened region should be accepting modest sacrifices, some barely more than inconveniences, to avert a disaster just around the corner. But it doesn’t seem to be happening.
And if we can’t save the Great Salt Lake, what chance do we have of saving the planet? 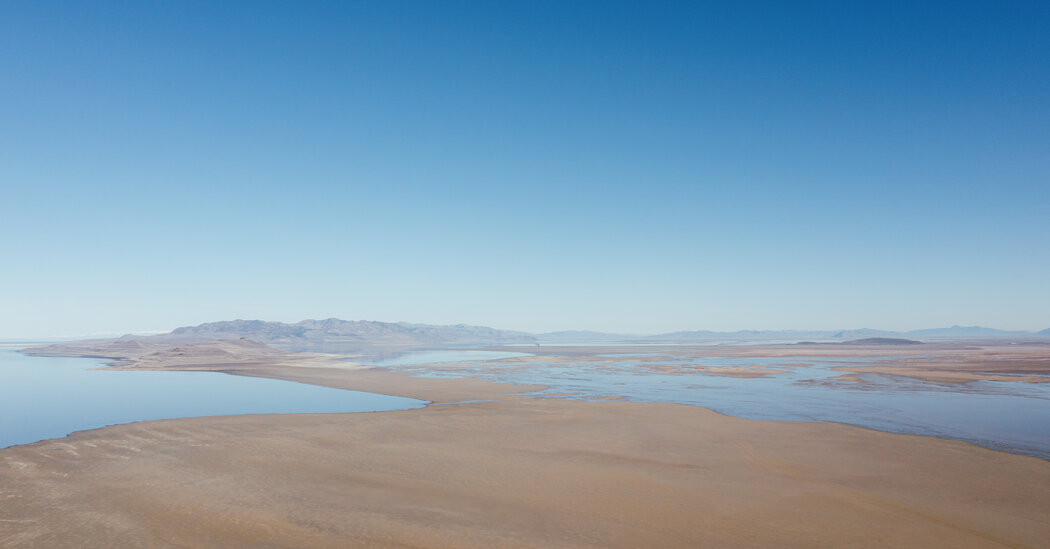 Opinion | What a Dying Lake Says About the Future

If we can’t save the Great Salt Lake, what can we save?

Utes fan arrested after threatening to blow up nuclear reactor if team lost...