Why Republicans Turned Against the Environment

By Paul Krugman
Opinion Columnist
In 1990 Congress passed an amendment to the Clean Air Act of 1970, among other things taking action against acid rain, urban smog and ozone.
The legislation was highly successful, greatly reducing pollution at far lower cost than business interest groups had predicted. I sometimes see people trying to use acid rain as an example of environmental alarmism — hey, it was a big issue in the 1980s, but now hardly anyone talks about it. But the reason we don’t talk about it is that policy largely solved the problem.
What’s really striking from today’s perspective, however, is the fact that the 1990 legislation passed Congress with overwhelming, bipartisan majorities. Among those voting Yea was a first-term senator from Kentucky named Mitch McConnell.
Advertisement
Continue reading the main story


That was then. This is now: The Inflation Reduction Act — which, despite its name, is mainly a climate bill with a side helping of health reform — didn’t receive a single Republican vote. Now, the I.R.A. isn’t a leftist plan to insert Big Government into everyone’s lives: It doesn’t coerce Americans into going green; it relies on subsidies to promote low-emission technologies, probably creating many new jobs. So why the scorched-earth G.O.P. opposition?

The immediate answer is that the Republican Party has turned strongly anti-environmental over time. But why?
Surveys from the Pew Research Center show the widening partisan divide over environmental policy. In the 1990s self-identified Republicans and Democrats weren’t that different in their environmental views: Republicans were less likely than Democrats to say that we should do whatever it takes to protect the environment, more likely to say that environmental regulation hurts the economy, but the gaps were relatively modest.
Since then, however, these gaps have widened into chasms, and not in a symmetrical way: Democrats have become somewhat more supportive of environmental action, but Republicans have become much less supportive.
Most of the divergence is fairly recent, having taken place since around 2008. I can’t help pointing out that Republican belief that environmental protection hurts the economy soared precisely during the period when revolutionary technological progress in renewable energy was making emissions reductions cheaper than ever before.

Republican voters may be taking their cues from politicians and media figures. So why have conservative opinion leaders turned anti-environment?

It’s not about belief in free markets and opposition to government intervention. One of the most striking aspects of recent energy disputes is the extent to which Republicans have tried to use the power of the state to promote polluting energy sources even when the private sector prefers alternatives. The Trump administration tried, unsuccessfully, to force electric utilities to keep burning coal even when other power sources were cheaper. Currently, as The Times has reported, many Republican state treasurers are trying to punish banks and other companies seeking to reduce greenhouse gas emissions.
Opinion Conversation The climate, and the world, are changing. What challenges will the future bring, and how should we respond to them?
What about the cynical view that the G.O.P. is simply in the pocket of fossil fuel interests? Obviously money talks, and contributions from coal and, to a lesser extent, oil and gas do flow mainly to Republicans. But the Inflation Reduction Act — which will open up many business opportunities — was endorsed by a number of large corporations, including energy companies like BP and Shell. Republicans were unmoved.
What has happened, I’d argue, is that environmental policy has been caught up in the culture war — which is, in turn, largely driven by issues of race and ethnicity. This, I suspect, is why the partisan divide on the environment widened so much after America elected its first Black president.
One especially notable aspect of The Times’s investigative report on state treasurers’ punishing corporations seeking to limit greenhouse gas emissions is the way these officials condemn such corporations as “woke.”
Wokeness normally means talking about racial and social justice. On the right — which is increasingly defined by attempts to limit the rights of Americans who aren’t straight white Christians — it has become a term of abuse. Teaching students about the role of racism in American history is bad because it’s woke. But so, apparently, are many other things, like Cracker Barrel offering meatless sausage and being concerned about climate change.
This may not make much sense intellectually, but you can see how it works emotionally. Who tends to worry about the environment? Often, people who also worry about social justice — either that, or global elites. (Climate science is very much a global enterprise.)
Advertisement
Continue reading the main story


Even Republicans who have to know better won’t break with the party’s anti-science position. As governor of Massachusetts, Mitt Romney had a decent environmental record; yet he joined every other Republican member of Congress in voting against the I.R.A.

What this means is that those people hoping for bipartisan efforts on climate are probably deluding themselves. Environmental protection is now part of the culture war, and neither policy details nor rational argument matters. 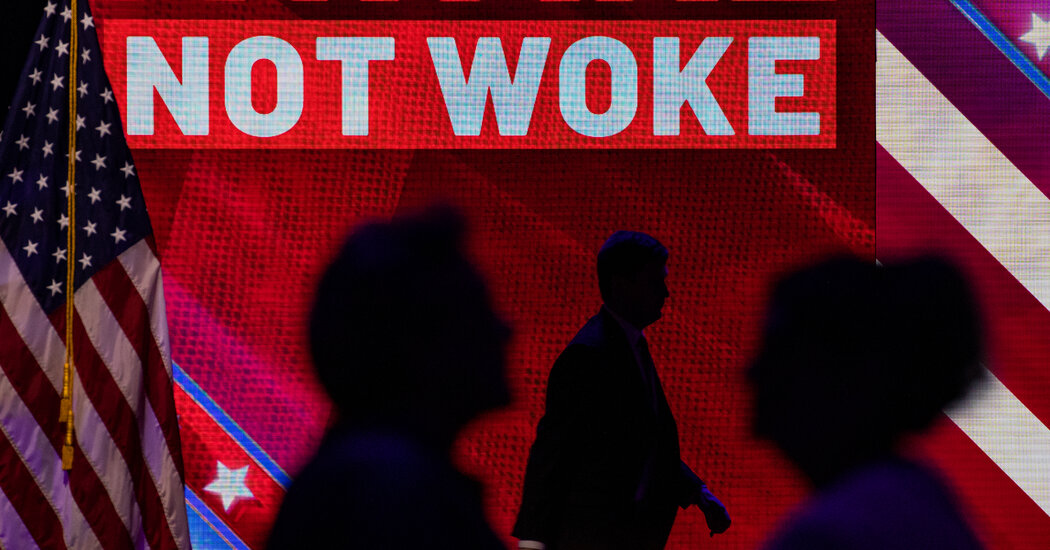 Opinion | Why Republicans Turned Against the Environment

Climate change gets caught up in the culture war.

Republicans aren't anti-environment,... Republicans are anti destroying the American economy in a futile gesture towards countering the global issue of climate change.
You must log in or register to reply here.

Climate protesters at Berlin airport glue themselves to runway...

Off Topic Thursday at 6:06 PM
tarheelbybirth

GOP to probe ‘cancer’ of climate-friendly investing after midterms