By Kevin D. Williamson
Mr. Williamson is the national correspondent for The Dispatch.
Sign up for the Opinion Today newsletter Get expert analysis of the news and a guide to the big ideas shaping the world every weekday morning. Get it sent to your inbox.
Because American politics has been so dominated by an entertainer, the most inevitable thing in the world is a sequel.
Donald Trump is expected to announce his inevitable 2024 presidential campaign on Tuesday in Florida. He is not as weak a candidate as many people might expect — or hope — him to be. I believe he is most likely to be the 2024 Republican nominee for president, and since we have only two major political parties, he could win in the general election — and that would be bad for the country.
Unless and until somebody else comes into the arena and proves otherwise, and despite disappointing Republican midterm election results that many people blamed Mr. Trump for, he remains the leader of the Republican Party. His style of personalized politics is incompatible with coalitional politics of any kind, and his agenda for personal rule in a second term is shaping up to be a nightmare.
He sets out in this pole position because the G.O.P. is a mess. What the midterms exposed again is that the party as it is currently configured doesn’t make any political sense and is a losing electoral proposition.
Advertisement
Continue reading the main story


But that is not necessarily a problem for Mr. Trump. In fact, a Republican Party that is in disarray and divided by bitter recriminations and factional rivalries is the perfect environment for him. After all, bitterness and recriminations are his main instruments, and it is when Republicans are at their lowest political ebb — when they are feeling the most vulnerable, victimized and marginalized — that Mr. Trump is at his political best.
Many of the Reaganites, Republican Party bosses and conservative intellectuals who had dominated the G.O.P. believe that they need die-hard Trump supporters — that they cannot win elections without them. But Trumpism’s political record is not especially impressive.
Mr. Trump himself is one of only 10 presidents who sought a second term and failed to win it, joining the ranks of William Howard Taft, Martin Van Buren and George H.W. Bush. Mr. Trump’s descent was far worse than Taft’s in that he took his party down with him, losing the presidency, the House and the Senate all in a four-year period, a performance reminiscent of the Republicans’ wipeout under Herbert Hoover in the Great Depression.
In the midterms, the man considered Mr. Trump’s most formidable competition for the Republican 2024 nomination — Gov. Ron DeSantis of Florida — won a smashing victory, defeating his Democratic opponent by almost 20 points. So in normal times, a normal political party would walk sideways away from the losers and, looking ahead, get behind the big winner. But these are not normal times, and the Republicans are not a normal political party.
It will not be easy to dislodge Mr. Trump. His bond with his supporters is personal — it is based on the promise of humiliating the right’s cultural enemies, not on policy, and it is not limited by transitory events like a disappointing midterm showing.

In the Trump cult’s theology, Mr. Trump is a god with a dual nature: He is simultaneously the macho, swaggering hero and the eternal victim at the mercy of the same powerful forces — “elites” — that his followers believe themselves to be victimized by. Hence the insistent refrain: “When you say Trump is evil and foolish, you are saying that we who voted for him are evil and foolish.” That doesn’t follow logically, but this line of thinking is about divine transubstantiation, not politics. Mr. Trump’s proposition to his followers is straight from the Bible he has probably never read: “If the world hates you, keep in mind that it hated me first.”
That isn’t thinking for a political campaign — it is thinking for a personality cult. Yet the electoral fiascos of 2018, 2020 and 2022 raise the question of whether keeping the cult satisfied is worth it. A great deal of the psychological energy behind Stop the Steal is directed at changing the subject from the fact that the 2020 coalition was, after all, a losing partnership. It did not perform any better in 2022.
Still, if Mr. Trump jumps into the G.O.P. primary early, he must be considered the presumptive Republican front-runner. His competition may include Mr. DeSantis, who last week actually did win an election — in a blowout, no less — and is surely thinking about the best way to kneecap Mr. Trump. No doubt Mr. DeSantis is thinking about the 2016 example of his fellow Floridian Senator Marco Rubio, who went all in on a rhetorical assault on Mr. Trump in the Republican primary and succeeded only in sidelining himself, a classic case of trying to kill the king and failing.
If Mr. Trump’s politics are fundamentally personal, you can be sure his governing agenda for his second term would be, too. It was laziness and ignorance, not good advice, that kept him from doing as much damage as he might have during his presidency. But his lieutenants have learned from those chaotic years, and they have a plan for staffing not only his administration but also much of the federal civil service with political loyalists under Schedule F, a new federal employee classification Mr. Trump created in 2020 by means of an executive order, since rescinded by President Biden.
Schedule F essentially would have converted many thousands of civil service positions into political appointments, a project that Mr. Trump plans to renew, thereby “making every executive branch employee fireable by the president of the United States,” as Mr. Trump put it. This would be a modern spin on “personal rule” as practiced by absolute monarchs such as King Charles I — an ironic vision for a party that still calls itself Republican.
The G.O.P. was wrong to think that Mr. Trump would be useful as a cat’s paw in 2016, and his serial failures on both the policy and political fronts should have been enough to demonstrate as much. Republicans do not learn quickly or easily, but they do learn.
Republicans who still believe that Mr. Trump will be the instrument of their political salvation in 2024 — or who are cynically willing to go along for the same reason — are much more likely to find him the instrument of their political destruction. And perhaps it is time for these dinosaurs to meet their asteroid. The loss of the current Republican Party — deformed, depraved, backward and, in the end, fundamentally anti-American — would benefit the country.
Advertisement
Continue reading the main story


Conservatives have always understood their attachment to the Republican Party to be a marriage of convenience — and now the most convenient thing for conservatives would be a divorce.


Kevin D. Williamson is the national correspondent for The Dispatch and a writer in residence at the Competitive Enterprise Institute. 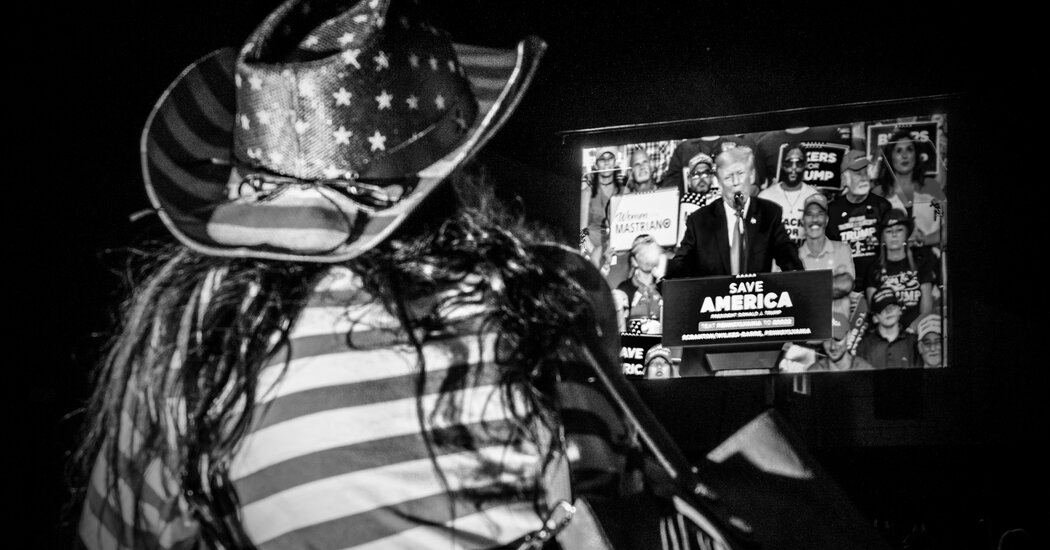 Opinion | Why Trump Could Win Again

He could win the Republican nomination and the presidency — and both would be bad for the country.

Thanks to the perpetual gift to dead slave owners known as the electoral college, the GQP nominee can lose the general election by millions of votes and still "win." We have to hope enough R voters are sufficiently turned off or switch sides in order to keep destructive fascists out of the White House.
Reactions: spiderland and cigaretteman
You must log in or register to reply here.