Wilko Johnson, the British guitarist who founded the incendiary 1970s blues-rock band Dr. Feelgood, recorded with singer Roger Daltrey of the Who and played the mute executioner Ilyn Payne in the HBO series “Game of Thrones,” died Nov. 21 at his home in Westcliff-on-Sea, in southeastern England. He was 75.

He was diagnosed with pancreatic cancer in 2013 and later underwent experimental surgery. His death was announced on his social media sites.

Offstage, Mr. Johnson seemed a most unlikely rock star — a former English teacher with a specialized background in medieval literature and the Icelandic sagas, a knowledge that probably served him well when he was cast in “Game of Thrones.”

In the HBO swordplay and fantasy series, Mr. Johnson portrayed Ser Ilyn Payne, a royal executioner rendered mute after his tongue was removed on the order of the Mad King. Although Mr. Johnson had never acted before, he said he found the work to be easy.

“They said they wanted somebody really sinister who went around looking daggers at people before killing them,” he told a British reporter. “Looking daggers at people is what I do all the time, it’s like second nature to me.”
Indeed, his quartet, Dr. Feelgood, mastered a raw and uncompromising style. Its music — an amped-up, high-energy version of Chicago blues and early rock-and-roll fueled by Mr. Johnson’s hyperaggressive guitar work — anticipated the intensity of such British punk bands as the Clash and the Sex Pistols.
“The words came at you like a blowtorched Chuck Berry,” the music writer Nick Coleman once quipped.


Onstage, Mr. Johnson cultivated an eccentric appearance, pacing back and forth in time to the music with a robot-like precision. He wore ratty black Nehru jackets and always sported an unkempt pudding-bowl haircut.

His guitar technique was striking — literally. He slashed at the guitar in an up-and-down motion without picks, his right hand — the strumming hand — positioned like the claw of a crab. Early in his career, the fingers on that hand would bleed from naked flesh hitting the strings. A red pickguard hid the blood.
(Decades later, when his guitarist son Simon mimicked the style and achieved the same bloodied hand after playing, Mr. Johnson told a reporter, “I was proud to see him bleeding in the name of rock ‘n’ roll.”)
With Dr. Feelgood, Mr. Johnson’s gripping presence was matched by that of Lee Brilleaux, the band’s singer and harmonica player, who often seemed primed to burst into violence onstage.

Mr. Johnson often wrote for Brilleaux’s gruff-staccato voice, as with the opening words of “All Through the City,” which describe a working-class industrial tableau of fires shooting from smokestacks: “Stand and watch the towers burning at the break of day.”


Mr. Johnson and his bandmates grew up near the oil and gas terminals of Canvey Island, commonly known as “Oil City,” an island in the Thames River estuary. They recorded their first album in 1975 and became part of the mid-1970s British music movement known as pub rock. Like the punk scene to follow, the pub rockers kept their music street-level, preferring small clubs to concert stadiums.
The band proved extremely popular in England with hits including “Sneakin’ Suspicion,” “Roxette” and “All Through the City.” Mr. Johnson wrote and co-wrote several of the songs and also created the band’s distinctive logo of a grinning man in sunglasses.

Backstage, the group was riven with tension. Mr. Johnson said he used amphetamines but was a teetotaler, which alienated him from his hard-drinking bandmates. “And it got to a situation,” he told the Essex Chronicle, “where I’m up in my room trying to write songs and they’re all in the bar having a drink.”


His bandmates fired him in 1977 during the recording of their fourth album, and he said he was “devastated” by being cut loose from people he considered his family. Meanwhile, Dr. Feelgood was eclipsed by the punk scene it helped instigate. Brilleaux died in 1994 of lymphoma. Mr. Johnson’s role in the group was highlighted in the 2009 documentary “Oil City Confidential,” part of a trilogy of films by director Julien Temple on British punk.
After leaving Dr. Feelgood, Mr. Johnson divided his time between leading his own trio and performing with Ian Dury and the Blockheads, which he joined in 1980. (Dury, known for mixing cockney dialect humor with funk and reggae rhythms, died in 2000.)
In 2013, Mr. Johnson announced that he had terminal pancreatic cancer and that a forthcoming tour would be his last. He then recorded the album “Going Back Home” with Who singer Daltrey and did a second farewell tour with him.

Wilko Johnson in 2013. (Paul Hackett/Reuters)
In concert, Mr. Johnson would point to what he called “the baby” — a large mass protruding from his lower abdomen — while Daltrey held his microphone up to the guitarist’s stomach. 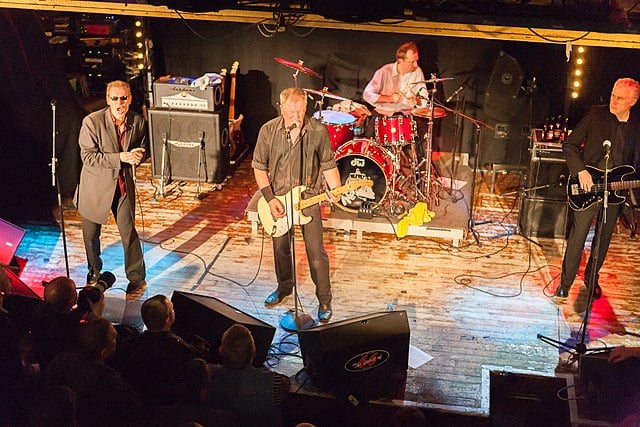 Our Top 10 Dr. Feelgood songs list looks at a band that released their first album in 1975 and has continued on though the present day, although with no

Mick Mars died in 1981. He's a real life version of Bernie.
Reactions: stillh8unlv
You must log in or register to reply here.