The Wisconsin Supreme Court on Friday prohibited the use of most drop boxes for voters to return absentee ballots, giving the state’s Republicans a major victory in their efforts to limit voting access in urban areas.
The 4-to-3 ruling by the court’s conservative majority will take effect for Wisconsin’s primary elections next month, though its true impact most likely will not be felt until the November general election. Gov. Tony Evers, a Democrat, and Senator Ron Johnson, a Republican, both face what are expected to be very close re-election bids.
The court adopted a literal interpretation of state law, finding that returning an absentee ballot to a municipal clerk, as Justice Rebecca G. Bradley wrote for the majority, “does not mean nor has it been historically understood to mean delivery to an unattended ballot drop box.”
Advertisement
Continue reading the main story


While state law allows absentee ballots to be returned in the mail, Justice Bradley wrote, “ballot drop boxes, however, are not mailboxes.”

Wisconsin Republicans and their conservative allies on the State Supreme Court have taken a range of steps since the 2020 election to try to limit the influence of voters over the state’s government.
In November, the court created a “least changes” standard for legislative redistricting that would apply to the gerrymandered 2011 map drawn by Republicans. The move locked in another decade of what are nearly Republican supermajorities in the State Legislature, even though the state is among the most closely divided in the country.
Republican state lawmakers in Wisconsin, spurred by Mr. Johnson, have recently sought to take control over the state’s election administration. The leading Republican candidates for governor this year have proposed eliminating the bipartisan Wisconsin Elections Commission — which was created by G.O.P. lawmakers and former Gov. Scott Walker, a Republican — and giving elected officials the authority to oversee state elections.
Republicans in the State Assembly have also authorized what is now a yearlong and still continuing investigation into the 2020 election overseen by Michael Gableman, a conservative former State Supreme Court justice who has suggested that state legislators should seek to decertify the results — something they have no authority to do.

The Supreme Court’s conservative majority also ruled last month that Walker appointees could stay in their posts after their terms expired until the Republican-controlled State Senate confirmed replacements selected by Mr. Evers — which G.O.P. senators have often declined to do.

On Friday, Mr. Evers called the court’s latest decision a blow to fair elections in Wisconsin.
“Politicians should not be able to abuse their power to prevent eligible voters from casting their ballots or cheat by changing the rules just because they didn’t like the outcome of the last election,” he said. “Today’s decision is another in a long line of Wisconsin Republicans’ successes to make it harder for Wisconsinites to exercise their right to vote, to undermine our free, fair and secure elections, and to threaten our democracy.”
Municipal clerks who oversee Wisconsin’s elections used drop boxes for years without controversy before the 2020 election, when about 500 were in place across the state, typically outside public libraries and municipal buildings.
After the election, which President Donald J. Trump lost in Wisconsin to Joseph R. Biden Jr. by about 20,000 votes, Mr. Trump’s campaign and his supporters filed an array of lawsuits seeking to invalidate votes cast in drop boxes because the method of returning ballots was not explicitly permitted under state law — though it was authorized by the Wisconsin Elections Commission.
It is not possible to determine precisely how many Wisconsin votes were cast in drop boxes in 2020. About 40 percent of votes were cast absentee, though that figure includes ballots returned in the mail and during in-person early voting. Before the pandemic, in-person early balloting was the predominant method of voting in advance of Election Day in Wisconsin.

In the opinion on Friday, Justice Bradley compared Wisconsin’s elections to contests rigged by dictators in Syria and North Korea and questioned whether past elections in the state had been legitimate.
“Thousands of votes have been cast via this unlawful method, thereby directly harming the Wisconsin voters,” she wrote. “The illegality of these drop boxes weakens the people’s faith that the election produced an outcome reflective of their will. The Wisconsin voters, and all lawful voters, are injured when the institution charged with administering Wisconsin elections does not follow the law, leaving the results in question.”
Advertisement
Continue reading the main story


The ruling will focus more attention on an election next year that will determine control of the court.

Justice Patience Roggensack, a conservative who has sat on the bench since 2003, is not seeking re-election. Leading Democrats in the state have coalesced behind Everett Mitchell, a judge in Dane County, which includes Madison. Janet Protasiewicz, a Milwaukee County judge, was endorsed by Justice Rebecca Dallet, one of the court’s three liberals.
Former Justice Daniel Kelly, a conservative who was appointed by Mr. Walker and lost re-election to the court in 2020, has said he is considering entering the race. The top two finishers in a primary in February will advance to a general election in April.
Republicans who control the Wisconsin Legislature are highly unlikely to enact legislation to permit drop boxes. Robin Vos, the powerful speaker of the Wisconsin Assembly, said in September that drop boxes should be allowed inside a municipal clerk’s office only during regular working hours.
“Should we have drop boxes everywhere where somebody could just go in with no security?” he said in an interview at his office at the State Capitol in Madison. “I don’t think that’s right.” 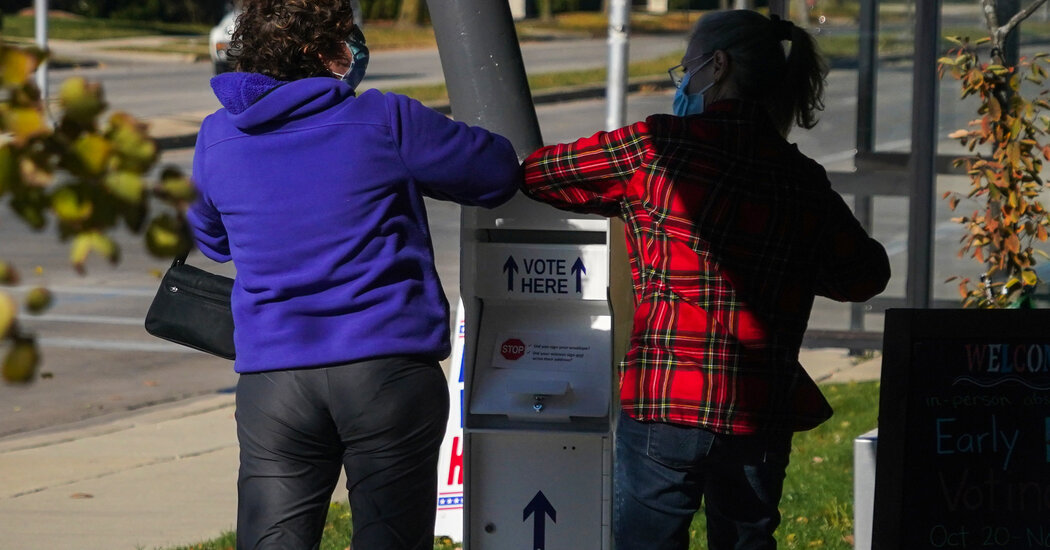 The ruling by the court, which has a narrow conservative majority, comes as Republicans have tried to limit voting access in the state’s cities.