Woman goes to work, gets swallowed whole by 22-foot python

When Jahrah, 54, left her home for work as a tree tapper on an Indonesian rubber plantation on Sunday morning, it was the last time her family would see her alive. When Jahrah failed to return home that afternoon, her husband sounded the alarm and went out to find her.

Are you on Telegram? Subscribe to our channel for the latest updates on Russia’s war in Ukraine.

The first sign that something was wrong was his discovery of his missing wife’s sandals, jacket, headscarf and knife on the forest floor.

The second sign was a heavily bloated snake, encountered by a search party looking for Jahrah the following morning.
“During the search the team found a giant python, measuring 7 meters [22 feet] in length, which we suspected had preyed on the victim,” the local police later said in a statement, which had referred to the victim simply as “Jahrah,” in line with the Indonesian custom of going by just one name. “The team captured the snake.”

The search team killed the reptile and sliced open its stomach, where they discovered Jahrah’s remains completely intact.


“The victim’s body was not destroyed when we found her inside the snake, meaning that she had only been recently swallowed whole,” the police said, after they found the reptile near the village of Betara in Indonesia’s Jambi province, located on Sumatra island.
Nonvenomous pythons usually prefer to not attack humans, choosing instead to feed on smaller animals — which they secure with a nonvenomous bite before suffocating to death through constriction and then eat.
But occasionally, humans are known to become their prey, too.
Snake conservationist Nathan Rusli, director of the Indonesia Herpetofauna Foundation, suspects a reticulated python was likely responsible. The species is the only reptile living in the Sumatran province of Jambi that is large enough to have consumed an adult human, he told The Washington Post.

“They are constrictors, so what they do is coil their body around you. They will give you a hug of death. You breathe in and your body gets smaller, it tightens its grip, and you can’t breathe out,” Rusli explained. “The top and bottom jaw of a snake is connected by ligaments, it’s quite flexible. They can swallow prey larger than the size of their head.”
Confirmed reports like these are relatively rare, occurring around once a year.
“Most cases are cases of farmers working in rubber and cacao plantations in Sumatra and Sulawesi, most cases occurs at night,” Indonesian snake expert Djoko Iskandar, a professor at Bandung Institute of Technology, told The Post. Only extremely long reptiles are able to successfully hunt adult humans, with the smallest Indonesian python known to have been involved in a fatal encounter still measuring over 18 feet long, Iskandar said.
Eek, a snake! Humans may be hard-wired to spot serpents — and fast.
Encounters between pythons and humans are becoming more common in Indonesia as people encroach on their habitats, which have come increasingly under threat, snake experts say.

In 2017, a 25-year-old villager on the island of Sulawesi was discovered inside a 23-foot-long python, suspected of killing him. The following year, this time on Muna island, a 54-year-old woman checking on her corn crops was swallowed whole in an area of the country known for its population of reticulated pythons.
Deforestation, which deprives snakes of their natural environment and food sources, is cited by experts as one factor behind the increasing frequency of fatal encounters between the reptiles and humans. Since 2000, Indonesia has lost 18 percent of its total tree cover, primarily as a result of deforestation, according to recent data from Global Forest Watch.
“If you destroy forest, the natural habitat of these animals, where are they going to go?” Rusli asked. “Especially if an area is fragmented, they’ll need to cross human settlements to get to another part of the forest.”

Additionally, trash, rats, and domestic animals associated with human life are easy prizes for snakes looking to feed, another attraction posed by the towns and villages increasingly encroaching upon their habitat. The pythons are also more likely to be hungry as a result of more competition from humans for the same food prey.
“It would be good not to demonize the snake too much,” Rusli suggested.

Quite possibly one of the worst ways to die.
Reactions: nolesincebirth and St. Louis Hawk

If pythons had a message board I bet the pooping thread would be epic in about a week.
Reactions: Tom Paris, MitchLL, Jimmy McGill and 16 others
S

HawkMachine said:
Quite possibly one of the worst ways to die.
Click to expand...

Third behind that head down cave guy and being burned alive.

Fourth is getting your balls bit off by a Laplander.
Reactions: pink shizzle

St. Louis Hawk said:
Third behind that head down cave guy and being burned alive.

Fourth is getting your balls bit off by a Laplander.
Click to expand...

What about getting your face ripped off by a chimp?
Reactions: St. Louis Hawk

I know this is horrible, but I kinda want to see a pic of the bloated snake.
Reactions: Jimmy McGill, hawkbirch, luvmyhawks and 1 other person

torbee said:
I know this is horrible, but I kinda want to see a pic of the bloated snake.
Click to expand...

I was considering chastising OP for not including a pic of the python's dinner.
Reactions: cigaretteman

Sorry, I'm #TeamSnake on this one. She's out there where the snake lived, snake's just doing snake stuff.

Like shark attacks in the ocean, snake attacks in the jungle are the result of taking risks and being out on the animals' turf. Get what you get.
Reactions: blackbones, McLovin32, HawkeyeShawn and 1 other person

Disturbing story. Just knowing snakes that large exist is terrifying. Just imagining all the ways a person can meet their end, this one has to rank up there with one of the worst

This is my favorite line of the story.

“In 2017, a 25-year-old villager on the island of Sulawesi was discovered inside a 23-foot-long python, suspected of killing him.”

Some top-notch investigative work to narrow down that cause of death.
Reactions: hawkeye54545, NoleinATL, noleclone2 and 1 other person

Mayland said:
This is my favorite line of the story.

“In 2017, a 25-year-old villager on the island of Sulawesi was discovered inside a 23-foot-long python, suspected of killing him.”

Some top-notch investigative work to narrow down that cause of death.
Click to expand...

I mean, that could happen
Reactions: cigaretteman and Mayland

Good for the python for being able to swallow her whole. Otherwise at age 54 she may have been tough and chewy.
Reactions: cigaretteman

Indonesia seems like the kind of place where it would be pretty easy to get rid of a wife who won’t stop nagging you.
Reactions: McLovin32 and cigaretteman 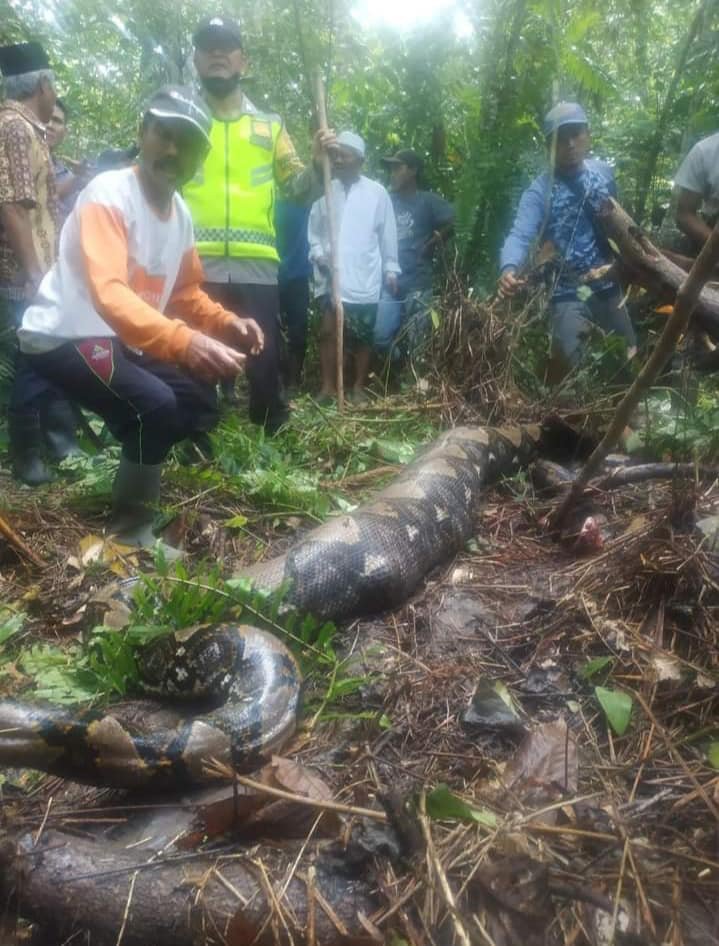 they say it's one of the worst ways to go.

I wonder how much metamucil was in the lady. Snake was just trying to keep healthy.

She shouldn't have dropped her knife, I'd have fileted that sumbitch if at all possible.

As Ron White says, “You don’t phuque with reticulated pythons!”

I really hope she was dead before she started getting swallowed. I'm assuming she suffocated prior.

Oh my what a way to die.
Reactions: cigaretteman
You must log in or register to reply here.

Snake on a plane: United flight from Tampa to Newark hosts uninvited passenger