Would You, Martini style? 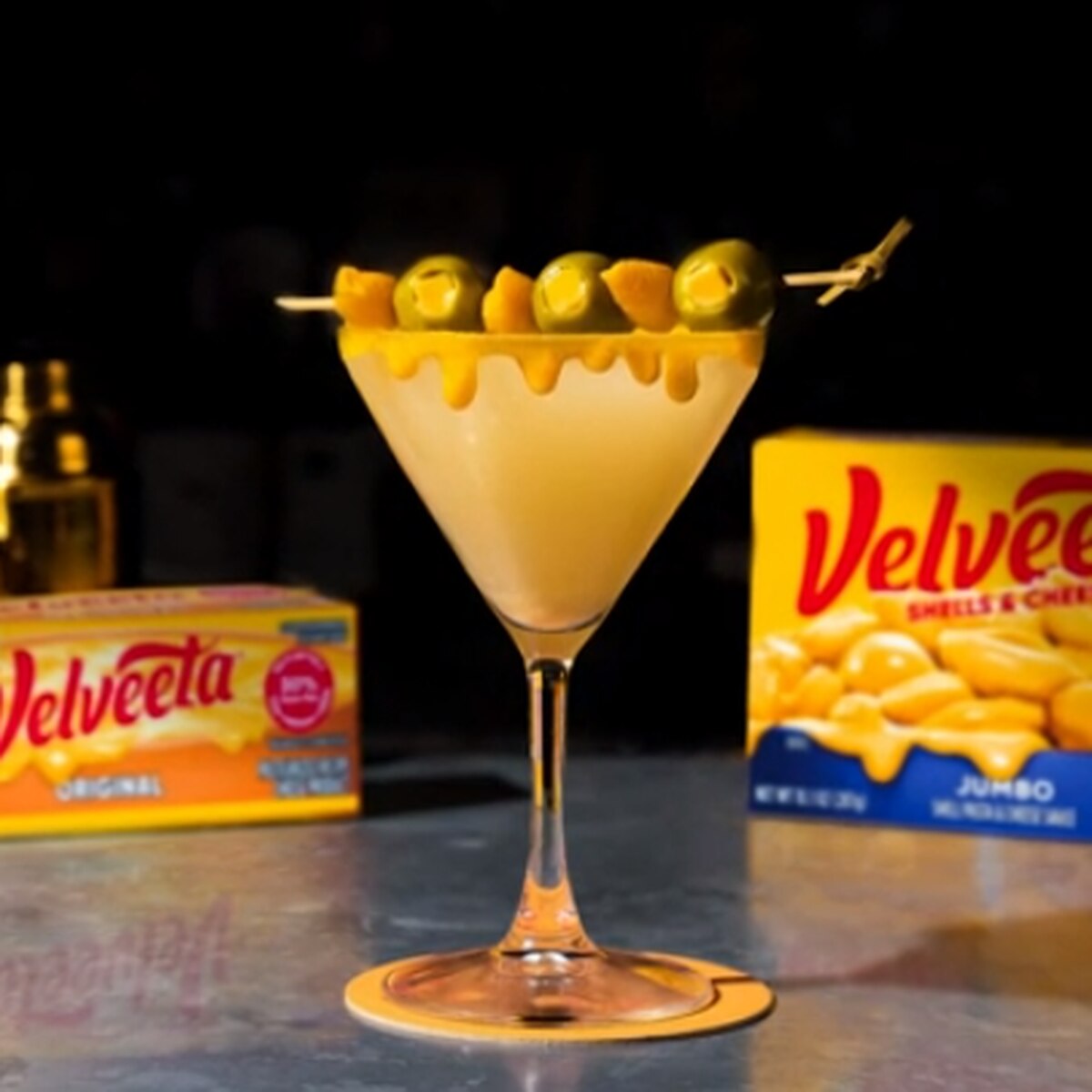 We’ve all heard that James Bond prefers his vodka martini shaken, not stirred. But what would this fictional British Secret Service agent have to say about a $15 Velveeta Martini?
Probably no good things. Luckily for him, and you, I tried this so-called “unapologetic, outrageously cheesy” drink to save you from a gimmick at the four-dollar-sign steakhouse.
Starting this Wednesday, Velveeta partnered with BLT Restaurant Group to release a limited edition “Veltini.” The drink combines a Velveeta-infused vodka, olive brine and vermouth in a cheese-rimmed martini glass with a cocktail pick of Velveeta-stuffed olives and Jumbo Velveeta Shells & Cheese. According to Kelsey Rice, senior brand communications manager for Velveeta, the Veltini is “rich and smooth and tastes like a dirty martini but taken to a whole new level with a delectable, outrageous twist and garnishes!”
In its advertisement, the Veltini commands a glossy, slick presence. But in person, the drink looks like a deranged cheese monster, with olives as beady eyes and a dripping Velveeta cheese rim as a lopsided mouth. A martini may not be everyone’s cup of tea, but at least the drink shines as a crisp sip for the right elegant occasion. The Veltini, on the other hand, looks as if someone had dumped a cheese plate into lukewarm bathwater. And ordering it inside the spacious, sophisticated BLT Steak near the White House feels like an inappropriate middle school joke.
A Velveeta Veltini is served in a cheese rimmed martini glass with a cocktail pick of Velveeta-stuffed olives and Jumbo Velveeta Shells & Cheese. (Jess Eng/TWP)
On first sip, the drink lacks all the cheesy flavors it claims to promote. Instead, an intense rush of olive and salt from the brine hits the back of your throat. Granted, it could be worse. Besides the alcohol, the other cheesy elements add little to the drink. The creamy cheese rim floats on the otherwise-smooth liquid like curdles in your mouth. The olives and pasta seem to come from a day-old grocery store pasta salad that no one wants to touch. Only toward the end of the drink, which took nearly an hour to finish, did I detect a strong cheese flavor.
ADVERTISING
Cheesy crossovers are always a gimmicky gamble, but once in a while, they pay off. Van Leeuwen’s Kraft Mac and Cheese Ice Cream received rave reviews from online critics for its subtle, yet “magical” and “shockingly delicious” cheesy flavors. Another beloved cheesy beverage is cheese tea, cold tea with a foamy layer of milk and cream cheese and a dash of salt, a combination that originated in Taiwanese night markets in 2010 and soon found an audience abroad. Velveeta is no newcomer to such stunts: In early June, it released its own cheese-scented and -colored nail polish with Nails Inc. But for a drink that claims to ooze cheese from all sides, the Veltini ultimately falls flat.
If you dare try the Veltini, you can order it between 5 and 8 p.m. at five BLT Steaks (in D.C., New York and Charlotte) and the Florentine, BLT’s Italian outpost in Chicago. According to a server, some diners were able to score the drink at earlier hours, if they asked nicely. For daredevil drinkers in other cities, you can even ship a kit for two Veltinis via Goldbelly — if you’re willing to shell out $50.
Velveeta and Veltinis dominated our dining experience, but the best cheesy bite came from the popovers that come complimentary with every BLT meal. These light and fluffy rolls offer strong Gruyere flavors, but you can’t tell from just looking at them. Which goes to show, perhaps less cheese is more cheese.

Dude, I'm a little hungover this morning and I seriously almost puked when I opened this thread.
Reactions: Colonoscopy and cigaretteman

Reactions: BelemNole, Colonoscopy, InsaneHawkJJP and 3 others
You must log in or register to reply here.

Why can’t I learn my lesson…

Made some homemade mac and cheese yesterday

Post here if you made it another day without drinking.