Worldwide LGTBQ aviation finds C.R. to be ‘a place to land’ as local Pride group prepares for big comeback

CEDAR RAPIDS — Often considered “flyover country,” Cedar Rapids is putting Iowa on the map as a place for the LGBTQ community to land.

The city of Cedar Rapids and The Eastern Iowa Airport will host the National Gay Pilots Association’s “Wings Over Iowa” fly-in event June 3-5, a first-of-its kind event that will bring members of the worldwide LGBTQ aviation community to Iowa’s second-largest city, officials announced in a news conference Wednesday at the airport.

For the aviation part of the event on June 5, there will be a static aircraft display, plus food and other vendors to provide more education about aviation. Other event details will be shared at a later date.

After meeting with LGBTQ community members and city officials here, seeing rainbow stickers in the windows of local businesses as a signal of true acceptance, Gambino said he knew NGPA needed to land in other places to grow its mission of building and uniting the LGBTQ aviation community. With the city’s aviation history, including its ties to the Wright brothers aviation pioneers, Gambino said this event would hopefully inspire aviation aspirations among youth and others.

As the city attracts other large events, such as the NCAA Division III college baseball championship in June, Mayor Tiffany O’Donnell said she is excited to show the world the city’s momentum and growth.

She said the true impact of this event won’t entirely be visible. NGPA will come here and touch lives because people “will see themselves in the work that you do,” O’Donnell told Gambino.

“This is just one more layer of new pride we can add,” O’Donnell said.


“I couldn’t be more proud to host the events here at CID. And for CID, we're all about getting more people exposed to the industry we love and really look forward to having the events here,” Lenss said.


This event marks some firsts for the organization too. Gambino said this would be the first time having a formal, advertised fly-in event where members will fly in their personal aircraft and jets, and the community is welcomed to come out and meet NGPA members.


There is “no time greater than right now” to host such an event, Gambino said, on the heels of Iowa and states around the nation passing anti-LGBTQ legislation. Iowa Gov. Kim Reynolds earlier this month signed a GOP-backed bill into law barring transgender girls and women from participating in girls’ and women’s sports, suggesting it levels the playing field for female athletes.


“This is the time to be welcomed by a city that is in a state that for some reason is taking a step backward, and to show the local community that they need not be afraid — that there are people just like them,” Gambino said. “They have a support network, they have a support system and they have an organization that they can join to see visions of themselves, to receive mentorship and to lift them up and give them a family that they may need in a time where they may feel shunned by their own.”


NGPA has a 32-year history and held its first meeting in Provincetown, Mass., in 1992. Members gathered mostly shrouded in secrecy, wearing T-shirts with airplanes or items to signal they were part of the event since it wasn’t broadly accepted to be openly LGBTQ.


Now, the group has over 4,100 members and 27 chapters in the U.S., plus three international chapters.


NGPA also will partner with CRPride, the not-for-profit that puts on the annual Pride fest.


CRPride President Corey Jacobson said the group is excited to partner with NGPA as Pride prepares to emerge from COVID-19 disruptions that shifted operations online and bring back the annual festivities in-person. Jacobson said many LGBTQ members have told CRPride they need these in-person interactions again, as some have been spending more time inside during the pandemic with families that aren’t supportive of their identities.


The inaugural Pride parade on June 4 will be followed July 9 with a bigger festival in NewBo.


It’s unfortunate that Iowa is beginning to have a reputation as not being LGBTQ-friendly with some of the legislation that has been introduced and passed, Jacobson said, but that’s not the case for the state overall and especially Cedar Rapids. This event is one step toward promoting awareness and acceptance of the LGBTQ community.


“When you go into these communities and you talk to people, the support is there, the allyship is there,” Jacobson said. 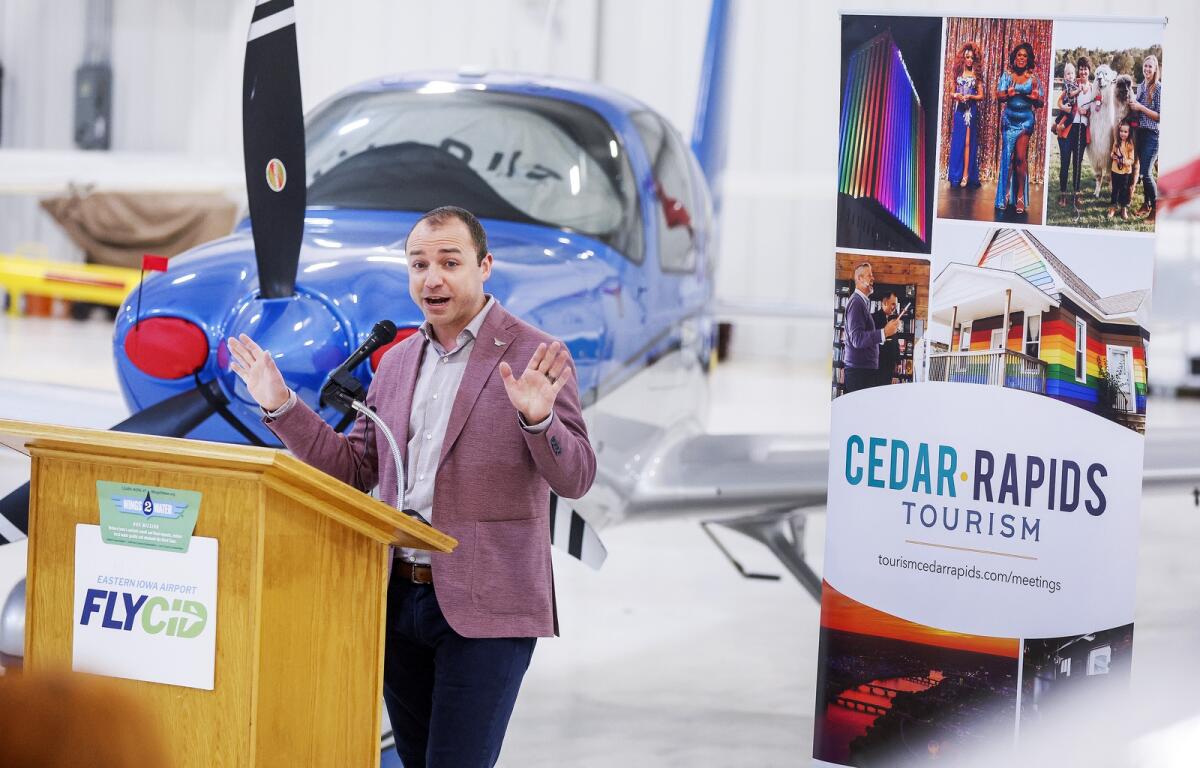 The city of Cedar Rapids and Eastern Iowa Airport will host the National Gay Pilots Association’s “Wings Over Iowa” fly-in event in June, a first-of-its kind event that will bring members of the worldwide LGBTQ aviation community to town.

The Tic Toc Lounge in the airport should rebrand as a gay bar, “The Cockpit”, for this event.
You must log in or register to reply here.