Nearly a year after the Board of Regents approved spending another $10 to $15 million to replace dozens of damaged or at-risk windows in the University of Iowa’s $392.7 million Stead Family Children’s Hospital, work has yet to begin.


In response to questions The Gazette asked last October, UI officials this week said a timeline for the Children’s Hospital window replacement still “has not been established.”


“The project is being phased to start work as soon as reasonably possible,” according to the UI response, which didn’t include details or answer questions about what is delaying construction.


UI Hospitals and Clinics hasn’t said how many windows need replacing in the 14-story, 507,000-square-foot Children’s Hospital, which opened in 2017 following cost overruns and project delays.


In October 2014 — during earlier phases of construction — UIHC shared on social media that “170 windows, each weighing 1,800 pounds, are being installed on the exterior of the UI Children’s Hospital.” In September 2015, the university asked the Board of Regents to increase the hospital project budget from $292 to $360.2 million for a long list of reasons, including “safety enhancements.”


“A robust window system was designed and comprehensively tested to assure its integrity would not be compromised during severe weather events, such as a tornado or straight line winds,” according to the 2015 documents.


When UIHC first went to regents last April asking to spend millions on the damaged windows, officials reported knowing about affected windows on levels four and five and on a connector bridge with the John Pappajohn Pavilion.


UI official now say they’ve established a timeline for “the first project to replace the connector bridge” that starts work in September and wraps in June 2023. The delay, they said, is “due to long glass fabrication lead times.”


Officials told The Gazette their budget hasn’t changed, even as the hospital continued to investigate and identify more windows needing a temporary protective film prior to replacement.


“We are entering into the design, so there's still work to be done as to what this may or will end up costing, but we’ve communicated to you a range of $10 to $15 million,” UI Senior Vice President for Finance and Operations Rod Lehnertz told the regents in April 2021. “It’s not small correction cost, obviously. It’s a lot of windows. But we will refine that cost through the design effort.”


As part of that total cost, UI officials at that time said they were installing a temporary protective film “on all windows that have been identified as potential safety hazards to provide an additional margin of safety.”


In November, the UI returned to the regents seeking “emergency contracting authorization” to pay Marv’s Glass in Iowa City another $771,516 to apply safety film to 77 more windows experiencing delamination — when an adhesive bond between two plates of glass starts to separate.


More than a year earlier — on June 18, 2020 — UIHC agreed to pay Marv’s Glass $577,751 to install the protective film on windows suffering a range of cracking and delamination.


Two days before UIHC put the protective film project out for bid, a consultant that UIHC in June 2019 agreed to pay $50,000 to investigate “recent occurrences of delaminated and/or cracked windows” increased its work budget to nearly $1 million.


When the UI first hired Chicago-based Simpson Gumperz & Heger, or SGH, in 2019 — just two years after the new Children’s Hospital began treating patients — a UI attorney told SGH its consultation came “in anticipation of potential litigation in connection with the construction of the University of Iowa Stead Family Children’s Hospital.”


The university agreed to extend SGH’s contract and increase its payment to $367,000 in October 2019 after the consultant spelled out a need for further investigation and assessment — including oversight of document review, data collection, glass sample collection, and laboratory analysis.


The UIHC says it is not making public a SGH “condition assessment report” from July 2019 due to the potential for litigation.


But the firm in June 2020 told the UIHC it had reached its $367,000 budget, despite having more work to do, and increased its cost to $974,000. Additional necessary work, according to SGH, included “glass survey visits”; outside counsel and support for glass fabrication, glass analysis review, testing, and installation; and a “second assessment and hands-on survey at the hospital and bridge.”


A schedule for the additional work mapped out SGH visits through January 2021, but the UIHC hasn’t shared details of work done since, total money spent related to the damaged windows or whether it has determined manufacturer or installation liability.


In April 2021, Lehnertz told regents that the UIHC — at least for the time being — would cover the window costs with “building usage funds.”


“We are and will continue the effort to establish causes related to this, and intend to hold responsible the causing parties,” he said. “There are both manufacturer and installation questions being addressed through study, and we will continue to garner more information on that as we continue this.


“But, with your permission, we don't intend to slow the project itself. We need to fix these windows and get that addressed.” 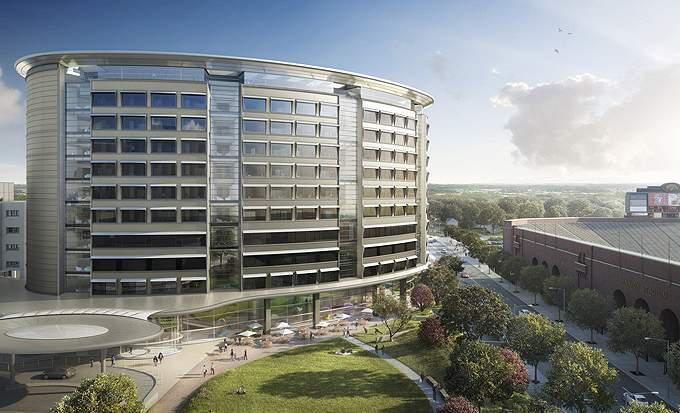 Nearly a year after the Board of Regents approved spending another $10 million to $15 million to replace dozens of damaged or at-risk windows in the University of Iowa’s $392.7 million Stead Family Children’s Hospital, work has yet to begin.

Maybe they should charge to participate in the wave.
Reactions: cigaretteman
You must log in or register to reply here.