Sign up for the Paul Krugman newsletter, for Times subscribers only. A guide to U.S. politics and the economy — from the mainstream to the wonkish. Get it in your inbox.
Nobody knows for sure what will happen in the midterm elections. But if Republicans take one or both houses of Congress, the most important question will be one that is getting hardly any public attention: What will the Biden administration do when the G.O.P. threatens to blow up the world economy by refusing to raise the debt limit?
In particular, will Democrats be prepared to take the extraordinary actions the situation will demand, doing whatever it takes to avoid being blackmailed?
Notice that I said “when,” not “if.” After Republicans took the House in 2010, they quickly weaponized the debt limit against the Obama administration, using it to extract spending cuts they couldn’t have achieved through normal legislative means. And that was a pre-MAGA G.O.P., one that for the most part didn’t deny the legitimacy of the president and didn’t make excuses for violent insurrections.
In fact, I wonder whether Republicans will even seriously try to extract concessions this time around, as opposed to creating chaos for its own sake.
Advertisement
Continue reading the main story


Notice also that I said “blow up the world economy,” not merely hamstring the U.S. government. For the consequences of forcing a federal debt default, which is what refusing to raise the limit would do, would extend far beyond the operations of the federal government itself.
Let’s back up and talk about why any of this is an issue. U.S. law, for historical reasons, requires in effect that Congress vote on the budget twice. First, senators and representatives enact legislation that sets tax rates and authorizes spending. This legislation ends up determining the federal budget balance. But if we end up running a deficit, Congress must vote a second time, to authorize borrowing to cover that deficit.
It’s not clear that this procedure ever made sense. In any case, in modern times the debt limit empowers cowardly posturing: Politicians can claim to be for fiscal responsibility, refusing to vote for a higher debt limit, without specifying how the budget should be balanced.
And no, “we should eliminate wasteful spending” isn’t an honest answer. The federal government is basically a giant insurance company with an army: Spending is dominated by Social Security, Medicare, Medicaid and the military, and voters want to maintain all of these programs. There’s surely waste in the government, as there is in any large organization, but even if we could somehow make that waste disappear, it wouldn’t do much to reduce the deficit.
Someone seriously worried about the deficit could call for higher taxes. After all, the U.S. tax burden is low compared with other wealthy countries. But Republicans aren’t going to go there.

Where will they go? There’s lots of evidence that Republicans will, if they can, try to use the debt limit to extort major cuts in Social Security and Medicare. They probably couldn’t pass such cuts — which would be deeply unpopular — through the normal legislative process, and they certainly wouldn’t have enough votes to override a Biden veto. But the idea would be to force Democrats into complicity, so that the public doesn’t realize who’s responsible for the pain. 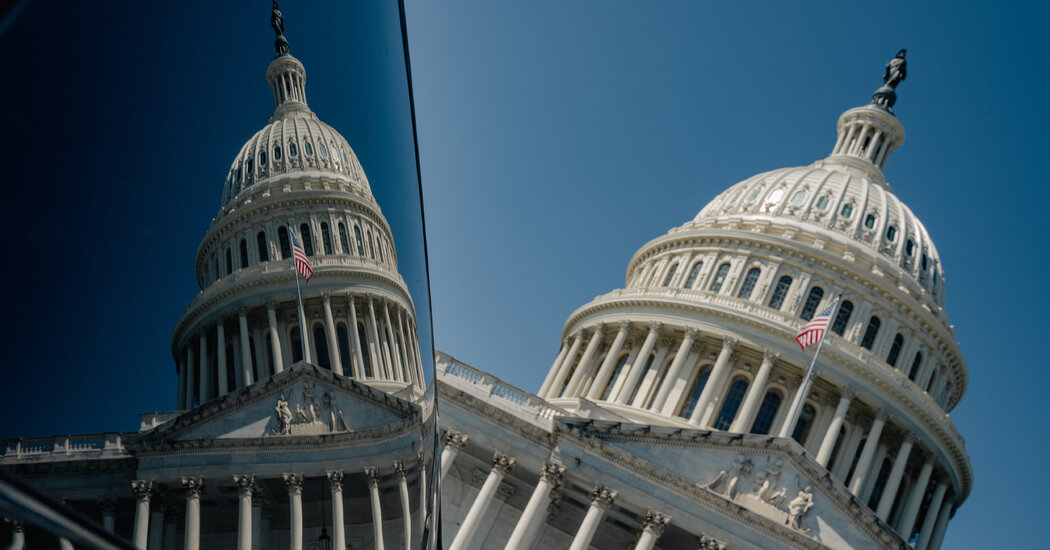 Democrats should do whatever it takes to block extortion.


After refusing for months to divulge what they’d do if they regained control of Congress, Republicans have finally revealed some of their economic agenda.
Unfortunately, it might involve causing a global financial crisis, based on recent interviews with some GOP congressmen.

Poll after poll shows that Americans trust Republicans more than Democrats on economic issues. This is probably unsurprising: Democrats control both Congress and the White House, and the country is experiencing its worst bout of inflation in four decades. Stocks have tumbled. Mortgage rates have spiked. Recession risks have undoubtedly risen.

Of course voters will express displeasure with the party they perceive to be steering the economy.

But it’s unclear why they assume Republicans would do any better.

The GOP has not said how it would tackle inflation or other major economic challenges, including a recession. This is the party, after all, that had no platform in 2020; and when Senate Minority Leader Mitch McConnell (R-Ky.) was asked in January what Republicans would do if they regained the majority, he dodged: “That is a very good question,” he said, “and I’ll let you know when we take it back.”


The midterm elections should be a referendum on the Biden administration’s record, McConnell argued. Meanwhile, presumably, the GOP agenda can remain a blank slate onto which voters project their wildest fantasies.

Despite McConnell’s efforts, some details have been etched in by Republican lawmakers. To be clear, none of them have clarified their strategy for fighting inflation, unless you count shouting “SOCIALISM!” and “KEYSTONE!” over and over. But they have given a peek at other economic priorities.
House Minority Leader Kevin McCarthy (Calif.) and other Republicans have recently backed proposals to make the 2017 Trump tax cuts permanent, as well as to extend or expand several other corporate tax breaks.
Never mind that Americans think corporations already pay too little in taxes, according to many polls. Cutting taxes further is also likely to make inflation worse, for the same reason that Republicans argue that increased government spending can also make inflation worse: giving people more cash to spend when there’s limited stuff to buy drives prices up.


The scariest part of the recently disclosed GOP economic agenda, however, has largely gone under the radar. It’s the plan to hold the debt ceiling hostage next year, which could easily precipitate a global financial catastrophe.
Republicans have withheld their support from raising the debt limit before, usually framing their hostage-taking as a commitment to fiscal restraint. But the debt ceiling has nothing to do with new spending; rather, it’s a somewhat arbitrary statutory cap on how much the government can borrow to pay off bills that it has already incurred, through tax and spending decisions that Congress has already made. Refusing to raise the debt limit is like going to a restaurant, ordering the lobster and a $500 bottle of wine, and then declaring yourself financially responsible because you skipped out on the check.
Actually, it’s worse than that.

If lawmakers dine-and-dash on behalf of Uncle Sam, they tarnish the creditworthiness of the United States and can make it more expensive for the federal government to borrow in the future because investors don’t trust us. Worse, they might accidentally blow up every other financial market on Earth, too.
That’s because U.S. debt is now viewed as the safest of safe assets. Virtually all other assets around the world are benchmarked against U.S. Treasury securities. If we default on our debt obligations — or even come close to default — that raises the question of the riskiness of everything else investors buy and can send shockwaves of panic through every other market.
Boom, financial crisis.

In a Bloomberg Government article last week, the four Republican lawmakers interested in serving as House Budget Committee chairman in the next Congress all said they’d refuse to raise the debt ceiling next year unless Democrats agree to entitlement cuts and work requirements on safety-net programs — that is, measures Dems would find abhorrent. This would set the stage for another high-stakes showdown.


Recall that when Republicans held the debt limit hostage in 2011, the United States’ credit rating was downgraded for the first time in history because we came perilously close to default. Since then, the GOP has become more politically unhinged, which means brinkmanship might well go further, which makes a debt default — even by accident — more likely.
Yet, in threatening this scenario, Rep. Jason T. Smith (Mo.), ranking Republican on the House Budget Committee, says: “The debt limit is clearly one of those tools that Republicans — that a Republican-controlled Congress — will use to make sure that we do everything we can to make this economy strong.”
Forcing a debt limit crisis, as the world teeters on the verge of recession, is the opposite of what you would pursue if you care about strengthening the economy. But no matter: Just look at the context-free polls! Surely, under GOP stewardship, the economy will be in good hands.
You must log in or register to reply here.

What happens if U.S. defaults on its debt? Potentially, millions of jobs and trillions in wealth lost.

The U.S. May Finally Breach the Debt Ceiling. Here’s Why That Would Be Very Bad.

This just in: U.S. will begin ‘extraordinary measures’ to stay under debt limit