Should be a real hoot.

Can an Iowa governor win re-election by running against public education? I don’t believe it’s ever been tried. But we’re about to find out.

Sure, the governor has feebly offered some conventional arguments, citing some studies arguing school choice benefits public schools through competition, while cherry-picking some declining public school test scores. She’s already the first governor I can remember to propose no real agenda for improving public schools, which once were among Iowa’s brightest points of pride.

But fear became the governor’s prime pitch. Public schools are places where children can access “X-rated books.” Schools are following alarming policies supportive of transgender students, allowing them to use restrooms and locker rooms consistent with their gender identity. Never mind these districts are simply trying to protect transgender students from discrimination and follow the law.

Her arguments fit nicely with GOP Senate President Jake Chapman’s assertion of a “sinister agenda” by schools and the media to endanger students. Throw in charges of liberal “indoctrination” in public schools we heard multiple times this legislative session. I guess we’re supposed to be grateful they didn’t create a new crime sending teachers to jail for making “obscene” books available in the school library, as Chapman and Sen. Brad Zaun proposed.

Bottom line: Be afraid, be very afraid, parents. Get out while you can, before your kids become lunchroom Marxists using bathroom litter boxes.

She also used the fear of political retribution for House Republicans, mostly from rural districts, who dared refuse to support the governor’s agenda. Rural school districts have nothing to gain and a lot to lose from siphoning off $55 million in education funding for private school vouchers. Their representatives actually listened to their pleas. What a novel concept.

Now the governor and conservative groups, which I call Friends of Kim, or FOK, are working to take some of them out in the June 7 primary. Three groups, the American Federation for Children Action Fund, Americans for Prosperity and the Family Leader have poured in more than $220,000 this month, largely in GOP House races, according to campaign finance disclosures.

On Wednesday, just hours after the Legislature adjourned for the year, Reynolds endorsed Zach Dieken, a Republican from Granville. He’s in a three-way primary that also includes incumbent Rep. Dennis Bush, R-Cherokee.


Earlier this month, at a forum, Bush criticized the governor’s voucher plan, according to the Storm Lake Times Pilot.


“I might as well come out and say it: but the governor’s trying to use this election as a referendum for her voucher plan. And I’m the only candidate that’s running for the House of Representatives that’s standing for the public schools,” said Bush, according to the paper.


A few days ago, the American Federation for Children Action Fund, a pro-school choice group that has former Wisconsin Gov. Scott Walker on its board, provided $25,800 in aid to Dieken’s campaign. Add that to the more than $21,000 in help he’s received from Americans for Prosperity this month, and Dieken is among the top recipients of outside dollars from Friends of Kim.


Reynolds has also endorsed Barb Kniff McCulla of Pella in her primary challenge against Rep. Jon Thorup, R-Knoxville, who also opposes the voucher plan. Americans for Prosperity has provided more than $22,000 in campaign help to McCulla just this month alone.


The socially conservative Family Leader has pumped more than $25,000 into GOP house campaigns. Rep. Steve Bradley, R-Cascade, has received more than $18,000 in help from the Family Leader and Americans for Prosperity as he challenges Rep. Lee Hein, R-Monticello.


Hein also opposes vouchers, and, apparently, is not pro-life enough, having voted against both a constitutional amendment denying women a fundamental right to abortion and the “heartbeat bill” denying access to an abortion once a fetal heartbeat can be detected, at about six weeks. He told the Des Moines Register his daughter discovered severe fetal abnormalities after 12 weeks of her pregnancy.


“The doctor sat down, and that’s a gut-wrenching decision that people have to make,” Hein told the Register. “As I analyzed the heartbeat bill, I just felt that that bill went a little too far and didn’t give families the option to make choices that sometimes are very tough to make.”


There’s apparently no room for thoughtful compassion in a culture war.


Rep. Dean Fisher, R-Montour, has received $37,000 from all three groups as he challenges Rep. David Maxwell, R-Gibson. Maxwell also opposed the abortion amendment. Fisher made headlines in 2016 telling a mother lobbying for medical marijuana to help her child, who suffers from a seizure disorder, to move to Colorado. Pro-life. But after birth? Scram.


Reynolds also endorsed Fisher on the same day as Dieken. It may be remembered as Retribution Wednesday.


These primaries and others will be the first test of Reynolds’ education fear agenda.


In a state where public education has been a bipartisan cause and where a more moderate brand of politics once tempered legislative excesses, it’s been remarkable to watch Reynolds wade happily into the conservative culture war fever swamps.


She’s thrown in with anti-maskers and vaccine skeptics as she made pandemic policy. She backs book-banners under the seemingly harmless banner of greater “transparency,” when schools are already plenty transparent now. She huddles secretly behind closed doors with parents critical of transgender policies and other local school board actions. But shuts out the rest of us.


No one alive has seen anything like it from an Iowa governor. With each divisive action she clings more tightly to her outraged base and pushes away Iowans who don’t agree. She is their governor. Will they have enough votes to re-elect her? I fear they will, but, then again, maybe fear won’t sell. 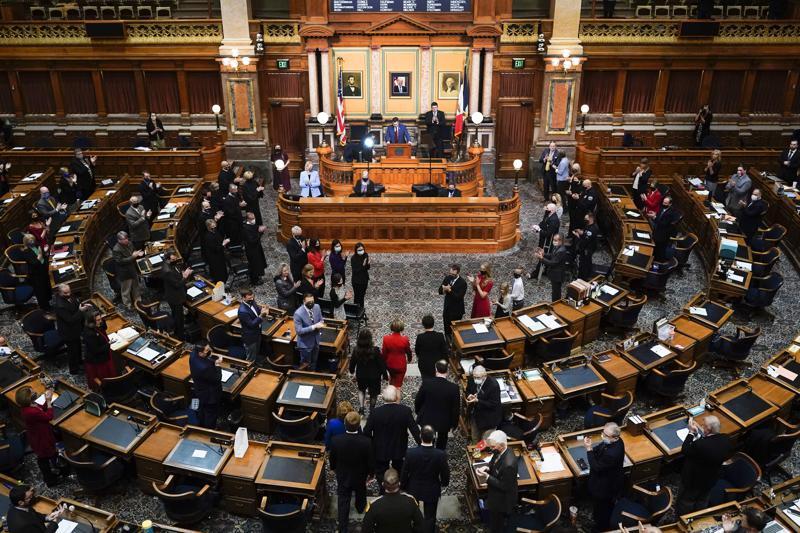 Can an Iowa governor win re-election by running against public education? We’re about to find out.

Dorman: Danger ahead for Iowa Democrats

DORMAN: Competency should be on the Iowa ballot in November