I don't want to hear any more bitching about the cold weather....

As temperatures rise across the West Coast, potentially breaking records across California, it's a different story farther north in Alaska. Thanks to a combination of dangerously low temperatures and bitter winds, bone-chilling weather has overtaken the Last Frontier this week.

On Monday morning, the remote northern town of Deadhorse reached 50 below zero, with gusty winds bringing the AccuWeather RealFeel® Temperature to as low as 88 below zero. Believe it or not, that's not the coldest it's ever felt in Deadhorse. A RealFeel of 101 below zero occurred on Jan. 28, 1989. (RealFeel was introduced by AccuWeather in 1997 but can be estimated using historical data).

Meanwhile, Nuiqsut hit an actual temperature of 53 below zero. Howard Pass, home to some of the state's most extreme weather, reported a wind chill of 91 below zero, only a few degrees away from the town's unofficial record wind chill of 100 below zero F, set in 2014. 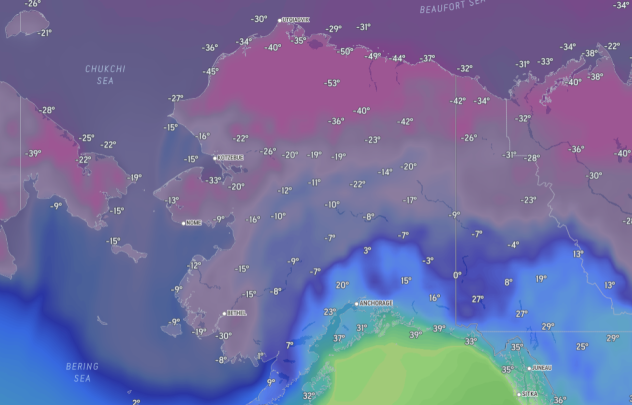 
Utqiagvik reached minus 30 early Monday morning, and temperatures did not get much higher throughout the day with a high of minus 25 F. This is the lowest high temperature the town has reported so far this winter.

"The intense cold is confined to the northern part of the state across the Brooks Range and the North Slope," said AccuWeather Senior Meteorologist Dan Pydynowski.

Farther south on Monday, temperatures in the Fairbanks area struggled to rise above zero degrees, several degrees below the average of 8 F for this time of year. However, under 400 miles south, the city of Anchorage stayed a couple of degrees above its average, which is in the mid-20s, largely thanks to warmer air from the ocean.

"The jet stream is running through the middle of the state, with the polar vortex and Arctic air trapped over northern Alaska producing dangerous low temperatures and AccuWeather RealFeel® Temperatures that are abnormal even for one of the coldest parts of the country," said AccuWeather Meteorologist Thomas Geiger.


https://www.accuweather.com/en/winter-weather/bone-chilling-cold-makes-it-feel-like-88-below-zero-in-remote-alaskan-town/1139212
You must log in or register to reply here.

Arctic air to drive cold deep into the Sunshine State and beyond...

The weather on Neptune