Remembers promoter Don Wachel, “Hendrix’s management called us. He was playing Minneapolis and was en route to St. Louis. His price was $8,000, which was a lot for an act in 1968. We debated over a week over it because we would have had to get at least 2,200 people to break even. It wasn’t a sure thing because his songs weren’t on the radio and general public didn’t really know who he was yet.” He goes on to say, “We took a gamble and didn’t make any money on the show. I think if we would’ve had him six months later it would have been standing room only.” The Experience was paid $19,000 for their appearance.

Regarding the concert, Wachel recalls, “The night didn’t go that easy. Soft Machine was contracted to play for $500. At show time, they demanded $1,000 or they wouldn’t go on. I said, ‘Fine, I don’t need you. We’ll do a longer intermission and go on to Hendrix.’ But both bands had the same road manager and that didn’t work. I had to pay the extra $500 to Soft Machine.” In addition, “Noel Redding was a bit perturbed because we had ‘Jimi Hendrix’ on the marquee outside instead of ‘Jimi Hendrix Experience.’ He wanted to make sure that I knew he was upset. Hendrix sat in a chair in the office and didn’t say a word about it.”

Opening act Night People was the Sunday night house band at the Col, and got to open the show. “We played first and had a pretty good following,” said guitarist Mike Stroehle in an interview published in Eyewitness: The Illustrated Jimi Hendrix 1968. “We were pretty confident. The thing that hit me was when Hendrix started, he was plunking around on his guitar, getting it set. He sounded better than us just plunking around than we actually playing.” Of the Hendrix set, he recalls, “He did a blues tune called ‘Red House’ and ‘Here Comes Your Lover Man’ which wasn’t on his album. A friend of ours recorded the show on a Tanberg reel-to-reel with a couple of microphones set up in the balcony. The original tape was excellent but that’s been lost – we still have copies.” 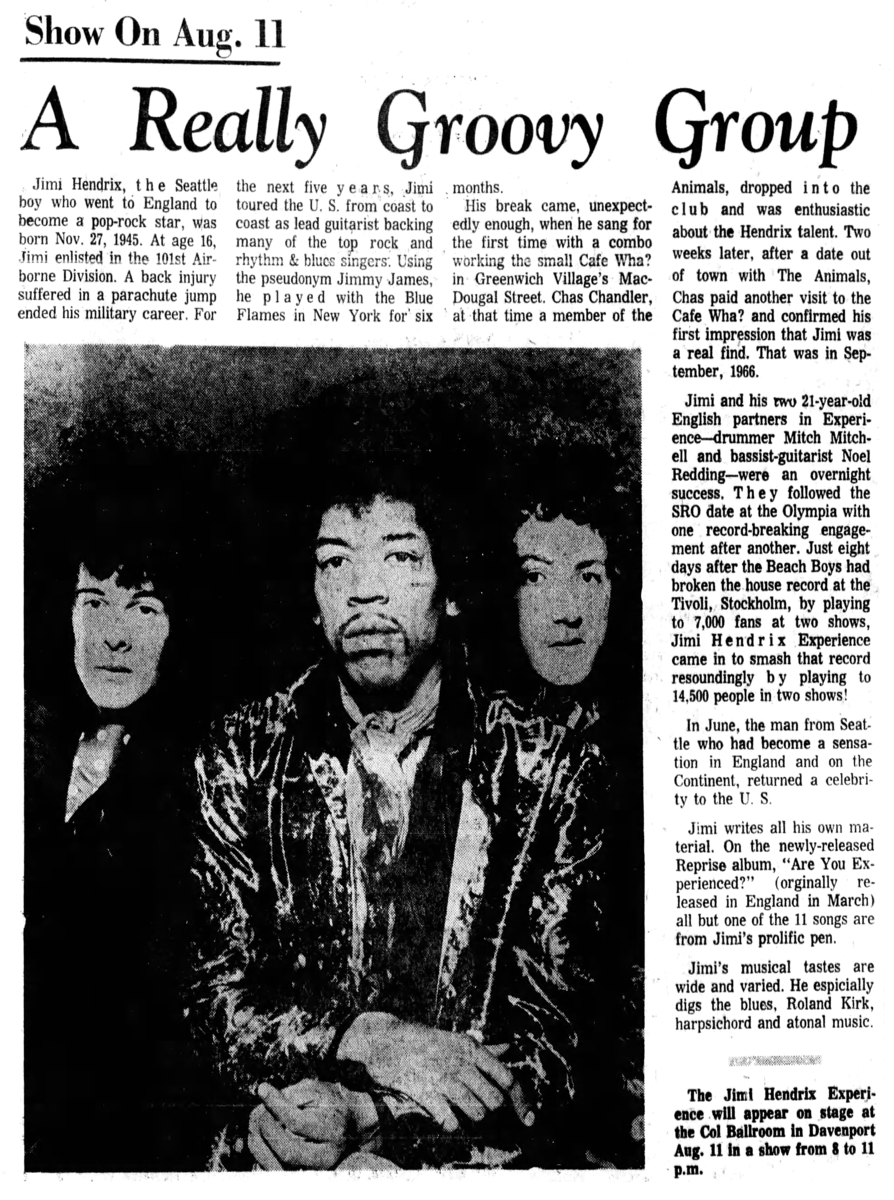 Some lazy performing there.
D

Do you have any idea of how long those Hendrix songs could be? He wasn't a 3 minute for the AM radio play kinda guy.
Reactions: Kinnick.At.Night, GOHOX69 and torbee

I wonder what ever happened to that guy
Reactions: GOHOX69

Presuming this is a joke. Probably played for 10-plus minutes on each song, so a standard 1 hour 30 minute or so set. Wish I'd been born and there!
Reactions: BioHawk, Kinnick.At.Night and GOHOX69

The bootleg recording of this has been around forever.
Reactions: Rifler
L

May we never forget that the Coliseum Ballroom in
Davenport hosted Johnny Cash in 1955.

that would have been a BA show

soybean said:
Do you have any idea of how long those Hendrix songs could be? He wasn't a 3 minute for the AM radio play kinda guy.
Click to expand...

Hendrix would have been like the Grateful Dead, turn a 3 min single into a 16 minute live song with 4 different solos and (likely) a diversion into something kind of resembling the rest of the song, buy call it a bridge.

LuteHawk said:
May we never forget that the Coliseum Ballroom in
Davenport hosted Johnny Cash in 1955.
Click to expand...

Someone calling live Hendrix “lazy performing.” It doesn’t get any more hilarious than that! 😂
Reactions: torbee

The Soft Machine credited Hendrix for giving them a shot on his tour when no other big acts would.

dude you see the mats there in 91.

So, a couple of my dad's good friends were at the Jimi show. They were with the Night People group. Dad missed the show.

Saw Stevie Ray Vaughn at Palmer Auditorium in the spring of 84. Fun fact, he was the opening act for Huey Lewis and the News. Crazy.
Reactions: torbee

Fan In Black said:
dude you see the mats there in 91.
Click to expand...

I did not as I was a sophomore at Iowa. Did see them at Gabe’s, but Paul Westerberg was shitfaced and it was a pretty mediocre show.

my first widespread panic show was at the Col in August of 95. $15 to get in with $5 pitchers. I've seen a few more since then 😉
You must log in or register to reply here.