Opinion The Editorial Board How the U.S. Can Help Support the Women of Iran Calling for Change

By The Editorial Board
The editorial board is a group of opinion journalists whose views are informed by expertise, research, debate and certain longstanding values. It is separate from the newsroom.
Sign up for the Russia-Ukraine War Briefing. Every evening, we'll send you a summary of the day's biggest news. Get it sent to your inbox.
The hijabs that thousands of Iranian women and girls have been burning in defiance over the past few weeks — since the death of Mahsa Amini in the custody of Iran’s morality police on Sept. 16 — are a symbol of far broader discontent with Iran’s corrupt and incompetent leaders. The protests since Ms. Amini’s death, led by women, have persisted for weeks and have brought Iranians in dozens of cities into the streets to reveal the depth of their anger. Iranians who are sick and tired of living under a tyrannical theocracy deserve the support of the United States and its allies.
The death of Ms. Amini, who was detained by the guidance patrol for allegedly wearing her hijab improperly, is an outrageous sample of the violence the Islamic Republic has visited on women since coming to power in 1979. The religious cabal that has led Iran since then, currently led by Ayatollah Ali Khamenei, the supreme leader, regards enmity with the United States and keeping women in their place as critical to their survival in power.
The threat of a virulently anti-American and anti-Israeli regime obtaining nuclear weapons is real, but the diplomatic efforts to block it must go hand in hand with efforts to help Iranians who are seeking respite and change.
Ayatollah Khamenei is 83 and ailing, and he is among the last of the Islamic revolutionaries who overthrew the monarchy. His passing, however, would be no guarantee of a more liberal regime in Tehran. As Karim Sadjadpour of the Carnegie Endowment for International Peace wrote in a recent essay in The Times, his cohort of true believers have been largely supplanted by opportunists in search of wealth and privilege.
Advertisement
Continue reading the main story


Global isolation may be damaging to the regime, but global integration would be dangerous, as Mr. Sadjadpour wrote. The regime might see its best chance of survival in maintaining repressive rule and “just the right amount of isolation.” Ayatollah Khamenei wants to be “neither North Korea nor Dubai. He wants to be able to sell Iran’s oil on the global market without sanctions, but he doesn’t want Iran to be fully integrated in the global system.”
Since Donald Trump ripped up the Iran nuclear deal in 2018 and reimposed sanctions, the Biden administration and other nations involved have been trying to revive it. That is a worthy effort, but negotiations for the deal, otherwise known as the Joint Comprehensive Plan of Action, are at a standstill over two Iranian conditions in particular that Western negotiators cannot meet: that the International Atomic Energy Agency end investigations into traces of uranium at undeclared sites, and that the United States provide guarantees the deal will not again be killed. It is up to Iran to choose whether to revive the deal, and its decision is not likely to be swayed by American behavior.
Whatever the future of the nuclear deal, its fate should not preclude the United States and its allies from vigorously supporting the desire of Iranian protesters for global integration, through better access to the essential tools of communication, organizing and protest.
The moral case is not solely the outrageous behavior of the clerical regime. It is also the fact that so much of the economic suffering of the Iranian people — rents that have multiplied, goods that have become prohibitively expensive, a currency that has plummeted so low that Iranians need stacks of bills to do everyday shopping — is the result of waves of American sanctions.
The U.S. needs to maintain its efforts to prevent Iran from obtaining nuclear weapons, and this board supports continuing diplomatic efforts that could curtail Iran’s nuclear weapons program and open the door to future agreements. But some of the current sanctions have gone too far, and fallen mostly on the very activists that the United States would like to help. Indeed, the regime has used Iran’s economic isolation to further entrench its power. The United States thus has a major stake in helping Iranians to a better life, ideally one without sanctions, morality police or nuclear weapons.

The U.S. also has the ability to help improve access to one of the major tools of popular resistance — communications. Iranian dissidents have long complained that sanctions on technology hindered their ability to communicate with the outside world and with one another. Immediately after the Iranian government cut off access to the internet for most of its roughly 85 million citizens, the Biden administration did what it should have done long before, issuing a general license allowing technology firms to provide technical means for Iranians to elude government restrictions.

Making the announcement on Sept. 23, Secretary of State Antony Blinken declared that “we are going to help make sure the Iranian people are not kept isolated and in the dark.” The administration also imposed targeted sanctions on the morality police and senior security officials, whom it holds responsible for violence against protesters and Ms. Amini’s death. The U.S. can go further, and encourage technology companies, including Google, Apple, Amazon and others, to make tools available and expedite applications for technology sales that go beyond the general license.
The current wave of protests may not force the clerics to move to a more open and tolerant government anytime soon. But every wave of protest over the years — 2009, 2017, 2019 and others — has stripped them of another layer of legitimacy. The current discontent, though so far not as widespread as earlier ones, is posing a challenge to one of the bedrock dogmas of the reactionary regime, and the calls in the street are no longer for reform. They are for revolution.
The supreme leader has responded to these calls for change with the same tired claim that the United States and the “Zionist regime” are behind the protests. That line no longer appears to work with people who have seen no improvement in their lives under the ayatollah or his hard-line president, Ebrahim Raisi.
The Biden administration and its allies have made a good start by lifting restrictions on technology, adding targeted sanctions and condemning the death of Ms. Amini and the crackdown on subsequent protests. But that cannot be where American support ends. The U.S. can build on that by making joint declarations with its allies, with academics and with nongovernmental organizations in support of the protests. It can also impose more sanctions against those who act as agents or mouthpieces of governmental repression, produce more Farsi-language broadcasts, and push for a resolution at the United Nations Security Council.
These are not empty symbolic gestures; they are demonstrations of solidarity with people whose bravery is an example for the rest of the world, and who have asked us to support their fight. Iran’s future as a prosperous and free nation rests with them. 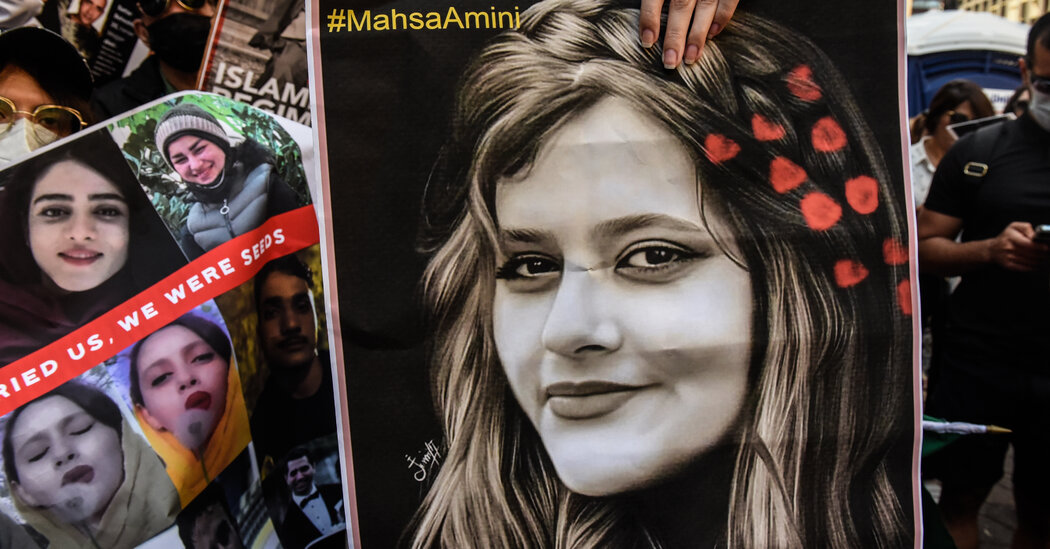 Opinion | How the U.S. Can Help Support the Women of Iran Calling for Change

Diplomatic efforts toward a nuclear deal must go hand in hand with American support for Iran’s protest movement.