And the men's program? 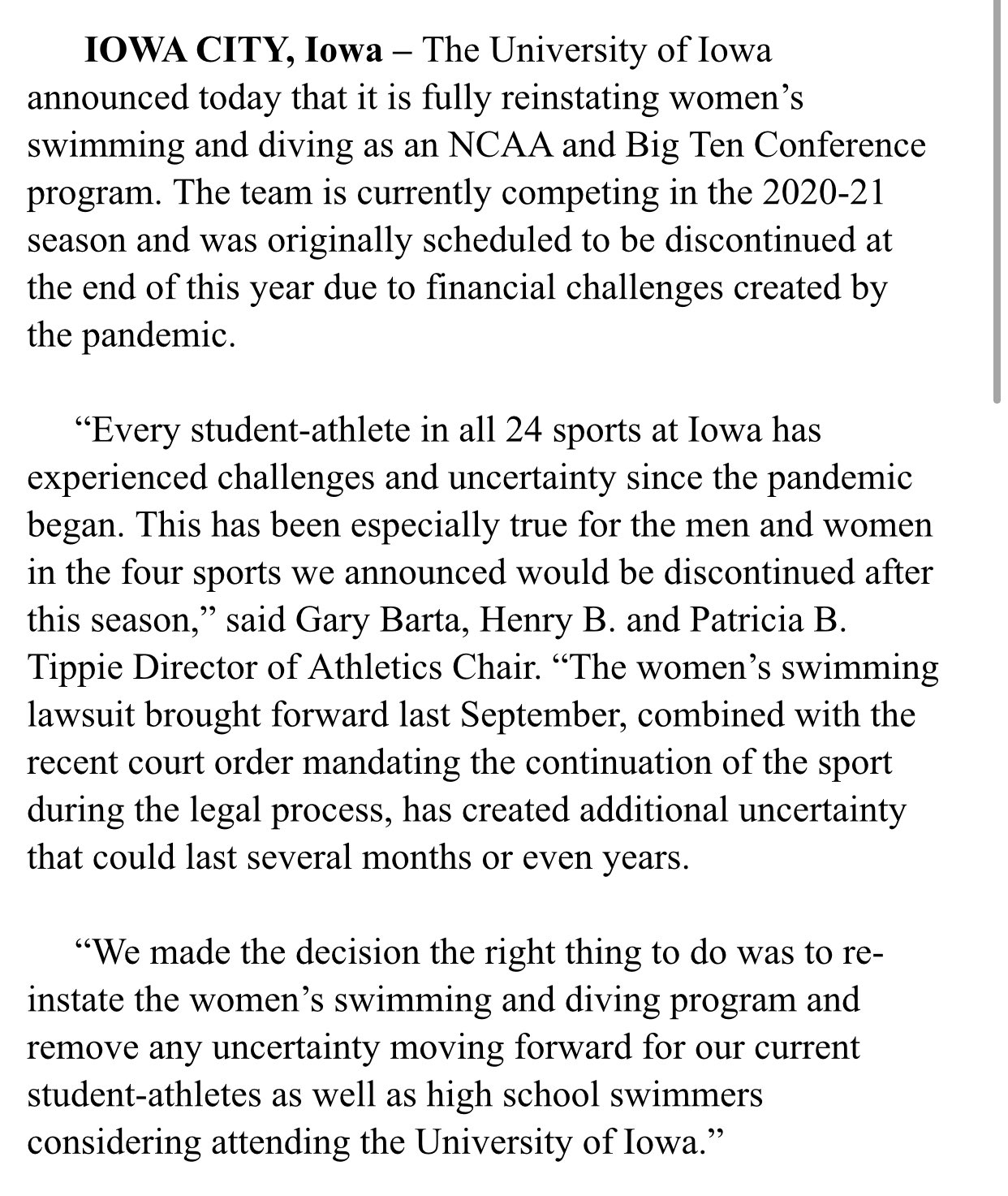 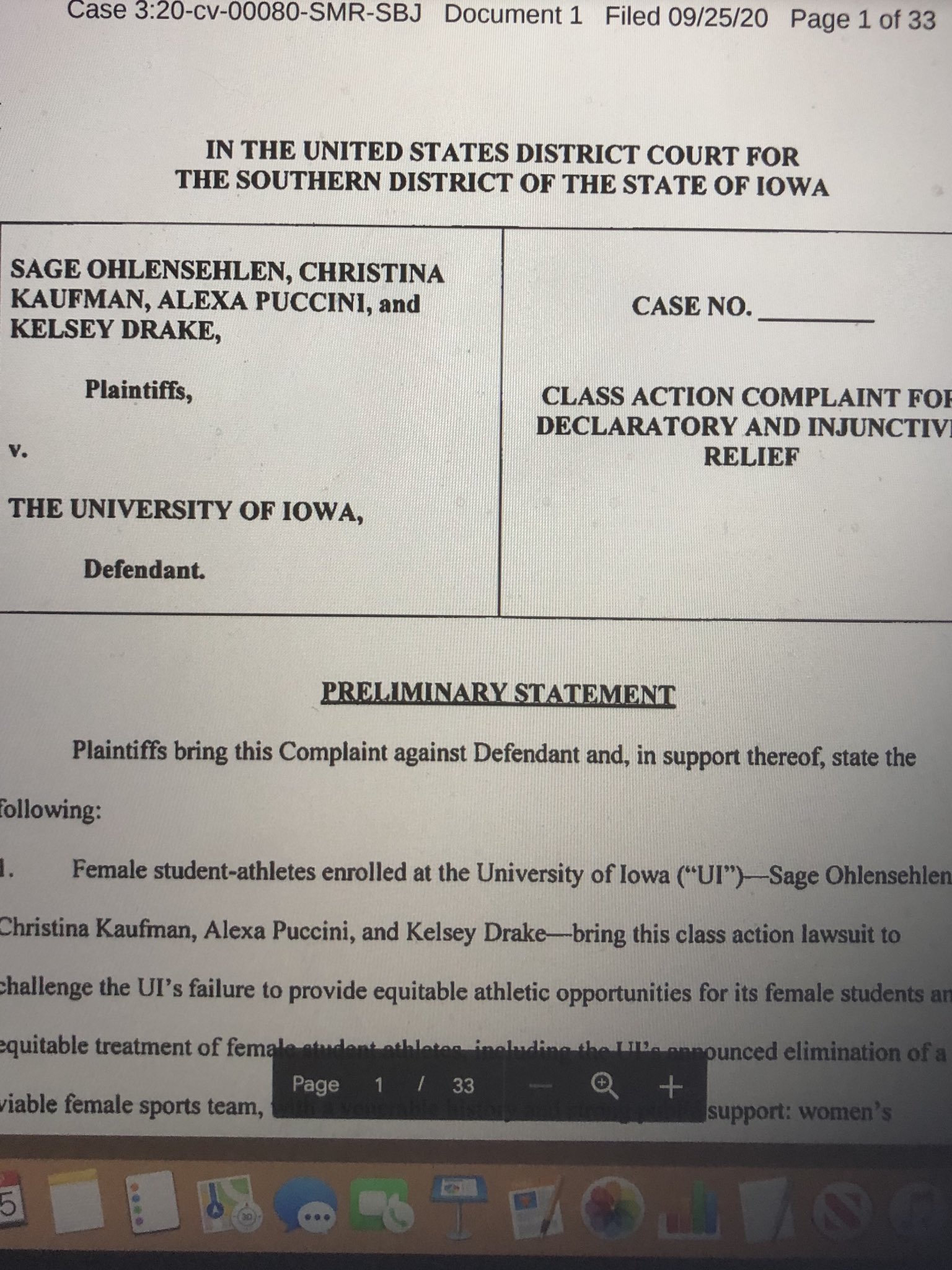 W&M threatened to do the same thing, the school in order to avoid a lawsuit announced that they will be adding more women to their retained sports along with capping some of the mens teams so now they will be in compliance or close to it.
The thing about Title IX is that it was instituted to increase female opportunities in sports, but when you read it, it says the schools need to create more spots and that schools cannot eliminate other mens sports or spots to meet compliance. Yes schools did achieve the goal of adding more females sports, but most schools also eliminated mens programs to also get compliant. The Fed nor NCAA has for the most part taken a look the other way approach to these violations si not to have to engage in lawsuits, but now with schools cutting even more programs using the Covid as an excuse, I am waiting to see when finally some lawsuits are filed on behalf of some mens programs.

A federal judge announced Tuesday she will grant an injunction blocking the University of Iowa from dropping women's swimming for the 2021-2022 school year.

The decision by District Judge Stephanie Rose came at the end of a two-day hearing on a Title IX complaint filed by four female Hawkeye athletes. The four, all members of the swimming team, said the university is violating Title IX, exacerbating the already fewer opportunities for women athletes by dropping women's swimming and diving teams, according to the lawsuit.

A university statement issued in response argues the institution is not violating Title IX, a law requiring that it offer equal educational opportunities, and cites a 2019 review by the Office of Civil Rights. University officials say the cuts are needed to help balance an estimated athletics department budget hole of $55 million to $65 million caused by lost ticket sales and other revenue because of COVID-19.

The preliminary injunction was needed, according to the plaintiffs, because the team will suffer irreparable harm if the university is allowed to move forward with its plan to drop the team while the case works its way through the court. Already, four of the team's six coaches and 15 of the 35 members of the women’s swimming team have taken new jobs or committed to another school starting next semester or next year. An additional four are in transfer portals, according to the lawsuit.

After two days of testimony, including from a former University of Texas athletics director brought in to review the university's Title IX compliance, the judge called it "a very difficult case" but said she believes the balance of harms and the public interest weigh in favor of granting the injunction.

"When you’re riding as close to the Title IX compliance line as the university has been ... when a crisis hits, options become pretty limited" for the school to react, Rose said.

Filed in the U.S. District Court for Southern Iowa in September, the complaint seeks to have the university reinstate the teams and create additional sports for women.

Freshman Alexa Puccini, sophomore Christina Kaufman and seniors Sage Ohlensehlen and Kelsey Drake are the plaintiffs in the case.

Ohlensehlen and Puccini testified Friday and shared their stories of dreaming of swimming at an institution like Iowa's and their heartbreak of seeing their team slowly "falling apart."

The university said there is one more year of competition left; therefore, reinstatement is not possible at this time, according to the statement it released in response to the complaint.

Iowa athletic director Gary Barta announced in August that the university would be cutting three men's sports and one women's sport starting after this academic year because of financial losses caused by the pandemic.

Cutting men's gymnastics, men's tennis and men's swimming, in addition to the women's swimming and diving teams will affect 64 male and 38 female athletes.

"These decisions can be undone, but only within a certain time period," the plaintiffs wrote in their motion for a preliminary injunction. "Two swimmers already left at the beginning of the year once they heard the termination news." 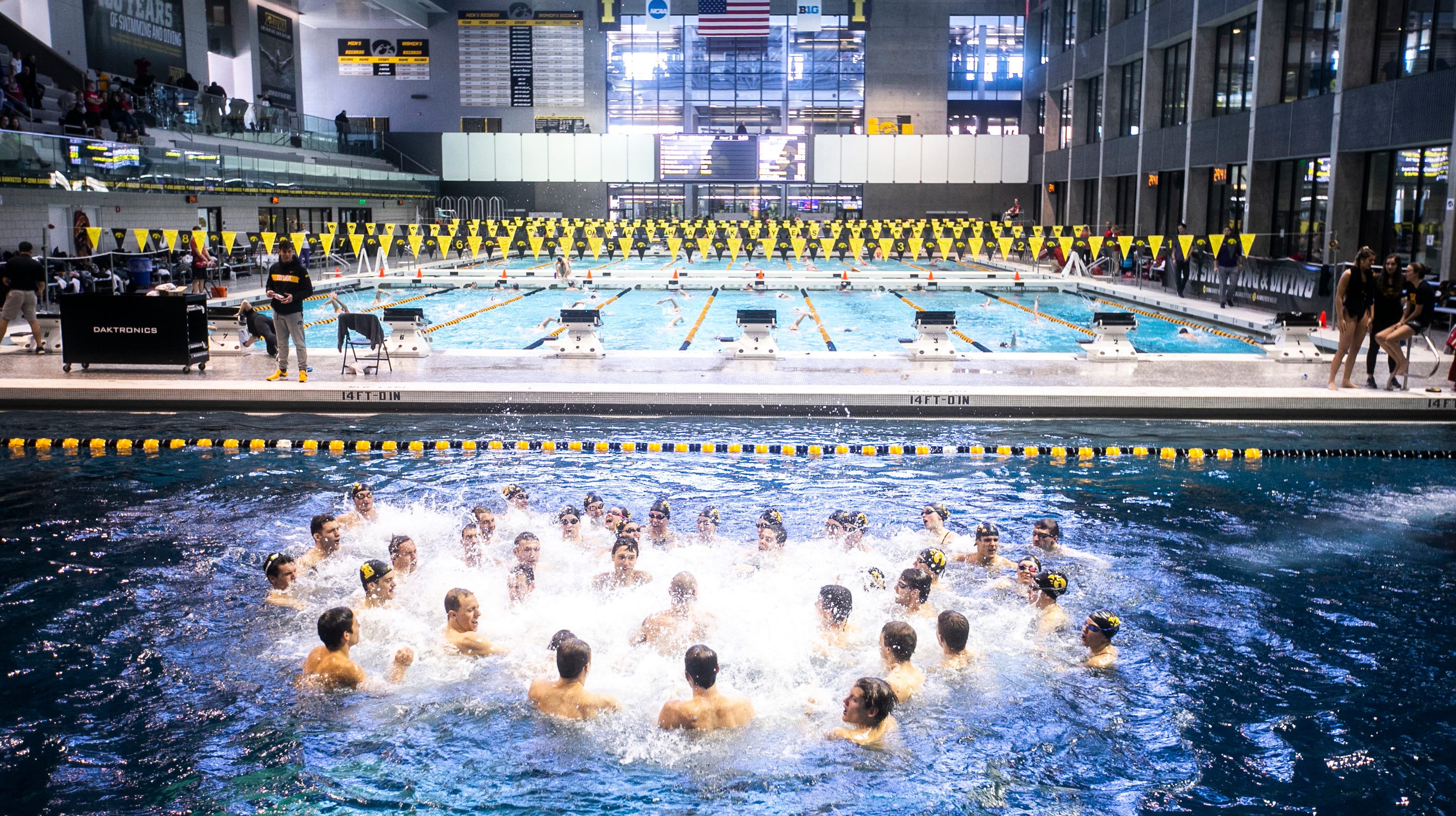 Iowa just had its only home swimming meet of the season, and possibly the last ever. 250 family members were let in to witness. 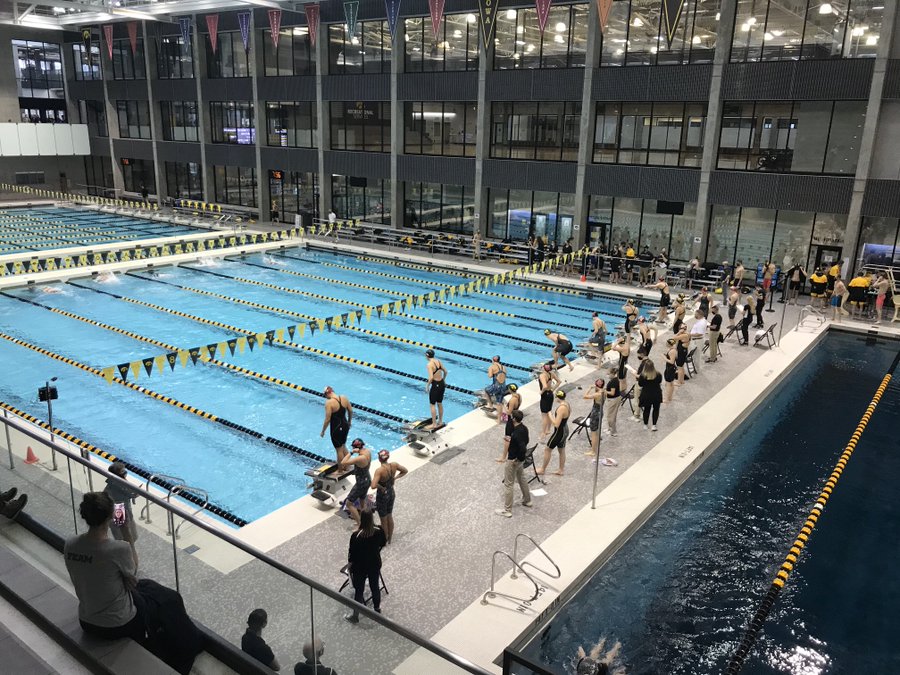 And the men's program?

And speaking of the men

Note that the lawsuit continues; they want at least one more female sport added at the University of Iowa.

Iowa doesn't want to offer the sport but they have to.

I don't know how Gary Barta has a job.

check this out & watch:

Men need to sue too. Simple as that. Sue.

Remember that $75M loan they thought they were going to have to take out?

And then the projected deficit decreased to $55 to $65M. 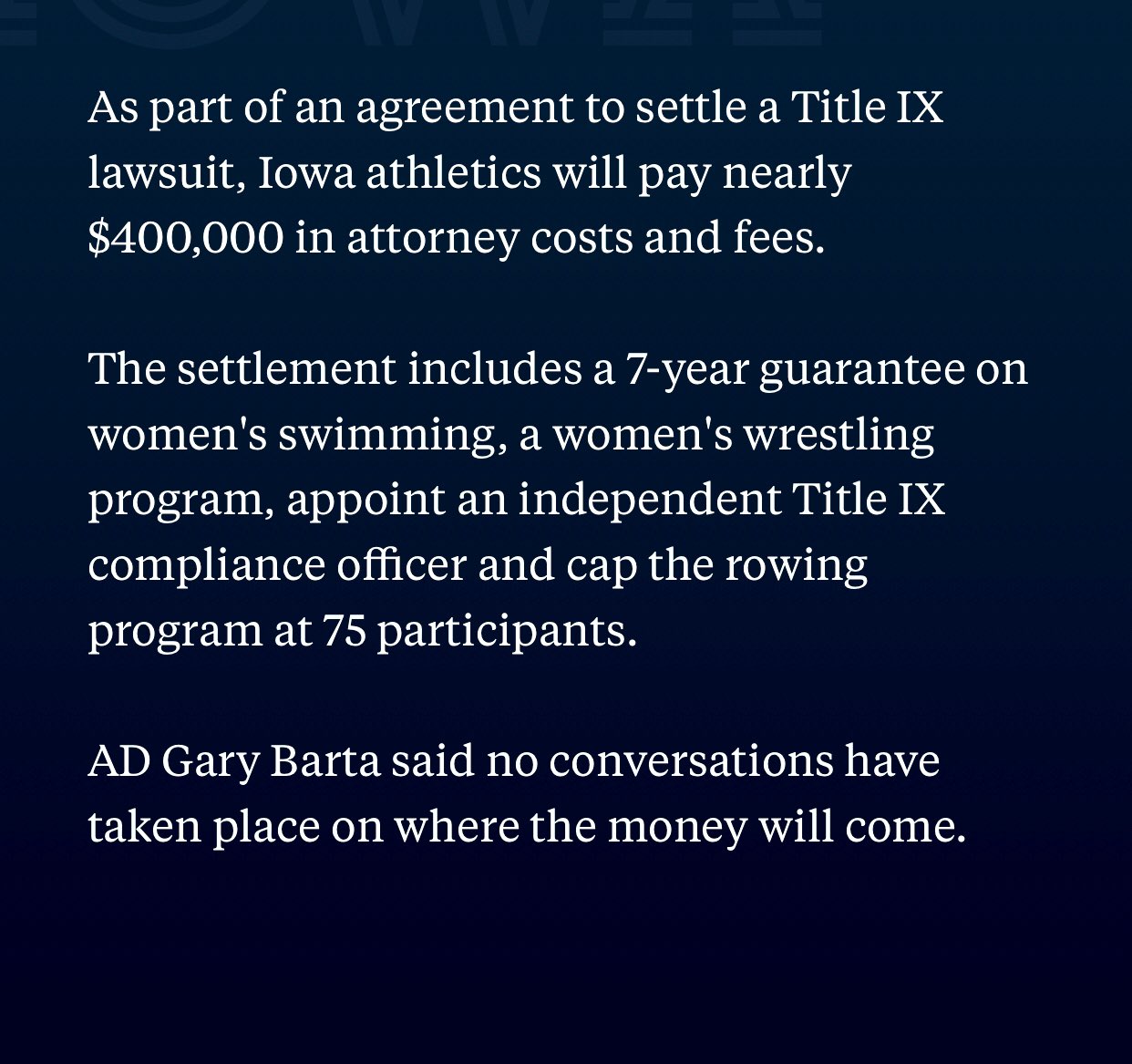 University of Iowa will pay $400,000 via Title IX athletics settlement