‘It’s Just Been Hell:’ Life as the Victim of a Jan. 6 Conspiracy Theory

Up a winding country road, in a trailer park a half-mile from a cattle ranch, lives a man whose life has been ruined by a Jan. 6 conspiracy theory.
Ray Epps has suffered enormously in the past 10 months as right-wing media figures and Republican politicians have baselessly described him as a covert government agent who helped to instigate the attack on the Capitol last year.
Strangers have assailed him as a coward and a traitor and have menacingly cautioned him to sleep with one eye open. He was forced to sell his business and his home in Arizona. Fearing for his safety and uncertain of his future, he and his wife moved into a mobile home in the foothills of the Rockies, with all of their belongings crammed into shipping containers in a high-desert meadow, a mile or two away.
Advertisement
Continue reading the main story


“And for what — lies?” Mr. Epps asked the other day with a look of pained exhaustion. “All of this, it’s just been hell.”

Almost from the moment that a violent mob stormed the Capitol on Jan. 6, 2021, allies of former President Donald J. Trump have sought to shift the blame for the attack away from the people who were in the pro-Trump crowd that day to any number of scapegoats.
First they pointed at antifa, the leftist activists who have a history of clashing with Mr. Trump’s backers but who did not show up when the Capitol was breached. Then they tried to fault the F.B.I., which, according to those who spread the baseless tale, planned the attack to provoke a crackdown on conservatives.
Mr. Epps, 61, was not just a bystander on Jan. 6. He traveled to Washington to back Mr. Trump, was taped urging people to go to the Capitol and was there himself on the day of the assault. But through a series of events that twisted his role, he became the face of this conspiracy theory about the F.B.I. as it spread from the fringes to the mainstream.
Obscure right-wing media outlets, like Revolver News, used selectively edited videos and unfounded leaps of logic to paint him as a secret federal asset in charge of a “breach team” responsible for setting off the riot at the Capitol.

The stories about Mr. Epps were quickly seized on by the Fox News host Tucker Carlson, who gave them a wider audience. They were also echoed by Republican members of Congress like Representative Thomas Massie of Kentucky and Senator Ted Cruz of Texas.

Eventually, Mr. Trump joined the fray, mentioning Mr. Epps at one of his political rallies and lending fuel to a viral Twitter hashtag, #WhoIsRayEpps.

After months of watching from the shadows as public figures he once respected — Mr. Trump among them — tarred his name and destroyed his reputation, Mr. Epps decided that he wanted to answer that question for himself.
In a daylong interview, sitting in his air-conditioned recreational vehicle with his wife, Robyn, and their two Shih Tzus beside him, Mr. Epps described himself as a father, a former Marine and a staunch but disillusioned conservative whose leaders had betrayed him. He granted the interview on the condition that the location of his new home not be disclosed.
“I am at the center of this thing, and it’s the biggest farce that’s ever been,” he said. “It’s just not right. The American people are being led down a path. I think it should be criminal.”

To that end, Mr. Epps and his wife have been searching for a lawyer to help them file a defamation lawsuit against several of the people who have spread the false accounts. Should they end up doing so, they would join a list of other individuals and companies — most notably, the voting machine producer Dominion Voting Systems — in using the courts to push back on the rampant disinformation that emerged again and again during Mr. Trump’s efforts to overturn the election.


“The truth needs to come out,” Mr. Epps explained, petting his dogs.
While Mr. Epps was a participant in some of the events that unfolded on Jan. 6, the claim that he inspired the Capitol riot in a “false flag” plot is solely based on the fact that he has never been arrested and therefore must be under the protection of the government.

But scores, if not hundreds, of people who appear to have committed minor crimes that day were investigated by the F.B.I. but have not been charged or taken into custody.
Mr. Epps said that he had acted stupidly at times when he and one of his sons took a last-minute trip to Washington for Mr. Trump’s speech about election fraud. But he said that he had managed to avoid arrest because he reached out to the F.B.I. within minutes of discovering that agents wanted to speak with him and demonstrated during interviews with them that he had spent much of his time at the Capitol seeking to calm down other rioters, an assertion supported by multiple video clips.
Mr. Epps, who questioned the results of the election, was also interviewed twice by the House select committee on Jan. 6. After his dealings with the panel were completed, officials released a statement saying he had told them that he never worked as an asset for, or an employee of, any federal law enforcement agency.
One of the moments Mr. Epps said he regrets most from his stay in Washington took place the night before the Capitol attack, when he joined his son and a friend for a pro-Trump rally at Black Lives Matter Plaza. During the event, he was videotaped by a right-wing provocateur encouraging people to go inside the Capitol on Jan. 6 in what he described, even at the time, as a form of peaceful protest.

The clip has been used to depict Mr. Epps as a man who not only urged people to riot at the Capitol but also then evaded prosecution. The Justice Department has not publicly addressed its decision not to charge him, but the legal definition of incitement requires a person’s words to cause an immediate threat of danger, not one that could possibly occur the following day.


On Jan. 6 itself, Mr. Epps, believing he could stop the violence at the Capitol, inserted himself into a conflict between the police and members of the pro-Trump mob that is widely considered to be the tipping point of the attack.

He can be seen in videos from around 1 p.m. that day accosting a rioter named Ryan Samsel, who had already started to confront officers behind a metal barricade on the west side of the Capitol. Mr. Epps said he intervened in the conflict to keep Mr. Samsel from attacking the police and tried to tell Mr. Samsel that the officers were merely doing their jobs. Mr. Samsel gave an identical account to the F.B.I. when he was arrested weeks later.
Mr. Epps also said he regretted sending a text to his nephew, well after the violence had erupted, in which he discussed how he helped to orchestrate the movements of people who were leaving Mr. Trump’s speech near the White House by pointing them in the direction of the Capitol.
Mr. Epps further acknowledged that while he moved past barricades into a restricted area of the Capitol grounds, he did not go into the building itself. The vast majority of those who did not enter the building or commit additional crimes have not been charged.
By the time the violence started spreading, Mr. Epps had already left the Capitol, having helped to get a sick protester to safety.
The problems began for Mr. Epps almost as soon as Revolver News published its first article about him in October. Suddenly, there were emailed death threats; trespassers on his property demanding “answers” about Jan. 6; and acquaintances, fellow members of his church, even family members who disowned him, he said.


“I pledge allegiance to the flag of the United States of America, and to the republic for which it stands, one nation, under God, indivisible, with liberty and justice for all.” [cheering] They came from all 50 states out of some sense of patriotic duty … “It’s so much more than just rallying for President Trump. It’s really rallying for our way of life. The American dream, against fake news.” … to protest an election they believed had been stolen. “Stop the steal! Stop the steal!” “We’re here, patriots. We’re in Washington D.C. Capitol building dead in front of us.” Their day of action would be Jan. 6 … “The House comes to order.” … when Congress would count electoral ballots and ratify the 2020 election results. For some, it was just a rally for their president. For others, it was a call to arms. “We have the power in numbers. 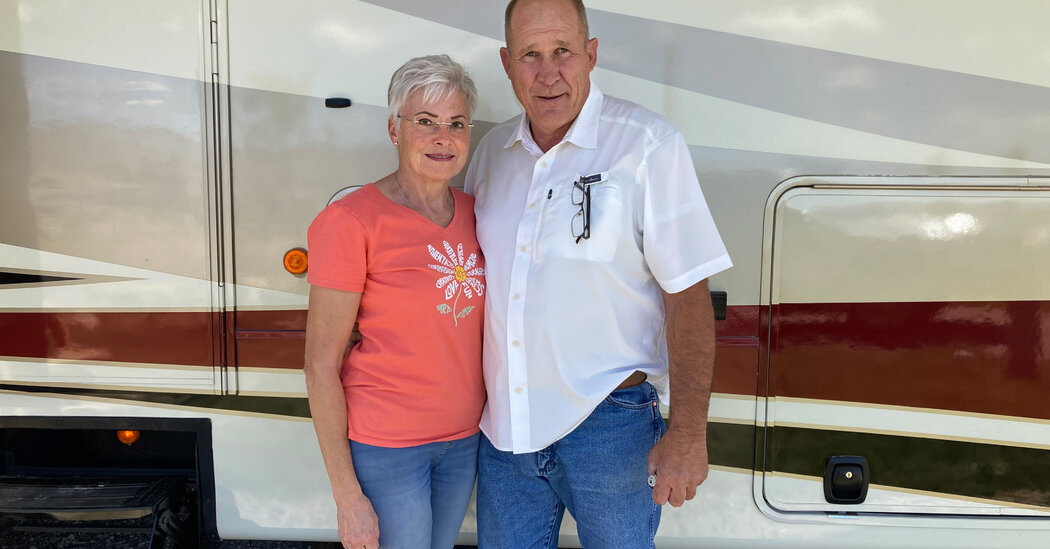 A Trump Backer’s Downfall as the Target of a Jan. 6 Conspiracy Theory

Ray Epps became the unwitting face of an attempt by pro-Trump forces to promote the baseless idea that the F.B.I. was behind the attack on the Capitol.

Nothing like braindead trumpanzees to ruin your day. Wish they would open season on them.
Reactions: fsu1jreed, Howard Roarkes Ghost, IaHawk44 and 1 other person
H

CarolinaHawkeye said:
Nothing like braindead trumpanzees to ruin your day. Wish they would open season on them.
Click to expand...

Isn’t this guy himself a “brain dead” himself? Soooooo…..why wasn’t he arrested again?
H

cigaretteman said:
The Justice Department has not publicly addressed its decision not to charge him, but the legal definition of incitement requires a person’s words to cause an immediate threat of danger, not one that could possibly occur the following day.
Click to expand...

Here’s the problem with this, he was doing the exact same thing on January 6th.

Soooo…..? Anyone got a good reason as to why he wasn’t arrested?

HawkFlayer87 said:
Here’s the problem with this, he was doing the exact same thing on January 6th.

Soooo…..? Anyone got a good reason as to why he wasn’t arrested?
Click to expand...

Because he didn't enter the capitol. Dumbass.
Reactions: fsu1jreed
You must log in or register to reply here.

Do You Have Any Sympathy for this Guy?

Tale of a supposed conspiracy theory.